From Uncyclopedia, the content-free encyclopedia
(Redirected from Law and Order)
Jump to navigation Jump to search

In the criminal justice system, the people are represented by three separate yet equally important groups: the police, who investigate crime; the district attorneys, who prosecute the offenders; and the Goddamn Batman. These are their stories.

“It's about guns and drugs and hoes.”

Law & Order is Fyodor Dostoevsky's long-awaited sequel to his epic hit, Crime and Punishment, released in a new-age video book format in one-hour installments with advertising breaks. It is considered the greatest work Dostoevsky wrote posthumously, and is brought to you by Vodka. Vodka: Get drunk off your ass.

Revered for its use of the ampersand over "and", hailed by people who thought it had used "and" in the first place, and watched by people who didn’t know the difference, Law & Order rapidly became "Law and Order".

When Crime and Punishment was published in 1863, the book was quickly a sweeping success, topping bestseller lists and reaping millions in debt (for which Dostoevsky had his legs broken). Critics praised the book, with its strong themes, realistic portrayal of the psychology of guilt, and its awesome-sounding title that makes up for the lack of the other two. Soon, audiences were demanding a sequel, preferably one with a similar title that would also make up for the lack of anything else of redeeming value.

In Law and Order, Dostoevsky is regarded as having invented a new type of character which consisted of pure ego rather than any identifiably human characteristics. This would become an archetype for thousands of other cop-based dramas in America.

Featuring cops that could instantly morph into super-cops who are not Jackie Chan, the show is an epic tale of betrayal, justice, crime, punishment, war, peace, and anything else all compacted into one hour TV scripts that reveal the total incompetence of the police more than its sister, Cops.

The immediate sequel to Law & Order was Law & Order: Sex 'N Kids. It features... you guessed it, sex, and kids. Consequently it earned loads of really high ratings because people apparently enjoy watching sex and kids on TV. The main characters include detective angerman whose angry he didn't stop Superman from destroying everything, so the detective destroys everything without remembering. Than there's the empathic half betazoid detective whose the daughter of the ambassador to EarthSea, than the logical half Vulcan lawyer whose katra is transferred to a different half Vulcan lawyer; and detective Tinfoil Hat who is actually a hallucination in the mind of an autistic child. Lastly there is Ice Cube, who always stings them with the help of his sexy wife CoCo and his bardic rapping stat buffing spells. Lastly the seemingly nice, calm Asian shrink who secretly genetically engineers dinosaurs that he feeds prisoners to. 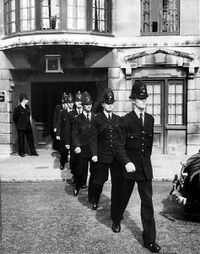 Special episode of the show set in Victorian London.

The show follows two detectives (the "Law", the "Fuzz", or "the Man"), currently portrayed by the Black Guy and His Partner (not the one with the mustache; he was transferred to a movie deal last week), who arrive on the scene of the crime to investigate. They make remarks or something. Cue title sequence set to cool theme music.

After this unexpected interruption, the detectives regain their concentration and go about solving or refusing to solve murders and other crimes (such as murder), often arresting bystanders who don't look right (are black) or are just plain black, after which they brutalize the arrested person, and then brutalize anyone who accuses them of police brutality. The police lieutenant, a black female Martin Van Buren, is somehow never bothered by this, nor is the Black Guy.

When the detectives have arrested someone (who is usually black), they forge evidence implicating him and bring him to the Real McCoy (the "Order"), who yells at them because the perpetrator was white and, unless their man is covered in soot, they’ve got the wrong person. The detectives spend the next several hours spraying the guy with a hose and scrubbing him until they give up this approach and covered the guy talcum powder. The detectives bring him back to McCoy, who, as dramatic music begins playing in the background, yells at them again because there's no way the person is the murderer, and covering him in talcum powder is not going to change anything. He then yells at the orchestra to shut up, and the show fades out to a commercial break.

Fade in. The detectives, somehow surprised by the invariable plot twist that forging evidence doesn't make the defendant guilty, quickly forge more evidence and bring in another black guy, whom they have painted white. McCoy, hopelessly irritated by the detectives' total competence and unwilling to repeat the same lecture on the proper procedures in crime-solving every episode for fourteen seasons, gives up on the two detectives and charges the defendant with "being purposefully black in front of a police officer". At this point, there is another plot twist as the new detective discovers that his partner is black, and therefore concludes that the Black Guy dunnit. More dramatic music, fade out to more commercials.

There is no commercial here. But it's still an annoying interruption anyway, isn't it? The show is filled with these.

When the other detective tells McCoy of his suspicions, McCoy, thoroughly frustrated, declares, "Fuck this, everyone's dunnit!" and quits. The Black Guy, desperate to save his reputation, accuses Professor Plum in the library with the wrench, only to open the envelope in the center of the board and find that it was, in fact, himself in the study with the color of his skin.

To piss viewers off, the words "To Be Continued" then come across the screen.

Fade to black, which is then arrested, tried and sentenced to be held down by the Man for all eternity.