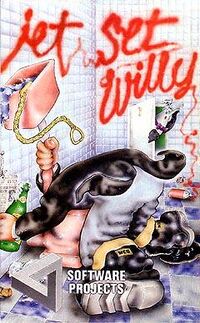 Jet Set Willy is one of only two videogames whose cover-art features a man with his head in a toilet clutching a bottle of champagne. The other is FIFA 2008

“I know what you want me to say. You want me to say "I used to love grabbing my joystick and playing with Willy all day during my boyhood" don't you? Well, I won't. I spent it wanking anyway.”

Jet Set Willy is a video game published in 1984 for a wide variety of British home computers such as the ZX Spectrum, ZX81, Atari Tart, Ringo Starr, and Commodore Bastard. It was later converted to Babbage Difference Engine and Abacus by enthusiasts. It has been described as "one of the best games you can't actually complete ever released."

Jet Set Willy (or JSW for lazy cunts) was programmed by Matthew Smith, a teenager from Europe with extraordinary hair and even more extraordinary eyes. Smith had already become the island of Britain's richest man through the success of his previous game, Manic Minor, and his incredible greed for even more pieces of coloured paper with the Queen on them looking serious lead to his writing a sequel, which you've probably guessed was called Hnnnnnnnnnnnnnnnggghhh (no, I'm only kidding, it was called Jet Set Willy). At first, he was just going to copy the classic screen-by-screen platforming action of Manic Minor but, after taking a drug, he had a crazy idea. But he put that idea to one side and forgot about it (which was good, because it involved genocide) and instead had another crazy idea - why not have a platform game where, when the little man walked off the edge of the screen, he ended up in a whole new screen? This ground-splitting innovation was called "flick-screen" and is the type of game found today, like Modern Warfare 2: pwn teh n00bs. It's because of Matthew Smith that all those Mario games you like so much don't just feature that stupid fat plumber jumping around one bloody room like a fucking idiot. 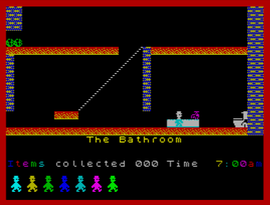 That's it Willy, make sure you tidy-up those taps left-over from your wild party!

The player takes control of Willy and has to guide him around the house in order to satisfy Maria. Once that's all been done with the player must then play Jet Set Willy which involves controlling a small group of pixels which, in 1984, resembled a small white man in a white top hat. Yes, that's right, this game is racist. This racist character, called Minor Willy, needs to clean-up his enormous mansion house because he had a mad party in it the previous night and his friends left empty bottles everywhere (although many of these "bottles" are actually oranges, bits of ice and triangle-things). What's completely absurd is that the person ordering him to clean up is his employee, Maria, who is supposed to be a housekeeper. This rather demented state of affairs has never been explained and so it's probably a situation not unlike that seen in the classic film The Servant where a domineering servant lords it over his weak "master". This is actually quite a dark game, come to think of it. Fuck Bioshock.

Collecting the "bottles" (which glow in rainbow colours, just like the real thing) requires a great deal of skill and patience from the player. Such things were commonly required of game-players in Thatcher's Britain but thanks to Tony Blair and New Labour everyone is soft now and expects to be able to complete a game just by moving the controller around, that's if they don't just get the State to do it for them. Unrealistically, Willy could jump very high consistently and made a strange noise as he did so; realistically, though, if he fell too far he would die and make a loud "squeak" noise; although the player was spared the sight of Willy's body bursting on impact. 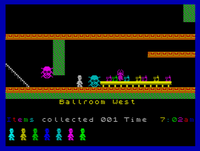 Willy encounters typical ballroom denizens: a pirouetting rabbit and the Face of Boe

The mansion house was full of "guardians" which would move up and down or, for variety, left and right. Whichever direction they had chosen to go, Willy had to avoid them all. Touching these monsters would make our white hero squeak and lose him a life, just like a white mouse touching a mouse-trap; one that is going left and right or up and down[1].

When Willy ran out of lives he would be squashed by an enormous foot. The owner of the foot remains a mystery to this day, despite my standing with a megaphone outside Matthew Smith's house demanding answers and the fascist local police who stopped me[2].

For those without comedic tastes, the "questionable parody" of this website called Wikipedia have an article about Jet Set Willy.

Jet Set Willy is remembered fondly by British and European people (mostly men) who were in their youth back in the day and one of the reasons for this is the memorable and fun rooms that Willy had to explore and rescue bottles from. These included "The Bathroom", "The Other Bathroom", "Where I Wet Myself" and "We Must Perform An Act of Lying Down in the Presence of Dead Furry Animals". This last room caused a great deal of confusion amongst gamers who had no idea what Matthew Smith meant, however we now all know that it refers to performing a Quirkafleeg.

One of the rooms "The Yacht" became the subject of a playground rumour. It was said that if you went to the room in question and waited for five hours then, assuming your power-supply didn't overheat and melt your Commodore Bastard, an actual yacht would crash through the wall of your bedroom and take you away to a desert island[3] where you would be able to drink beer and have naked girls do things to you. Although this rumour wasn't true, Software Projects did include such a feature in the games' sequel Jet Set Willy II: Eclectic Boogaloo[4].

Jet Set Willy, being written in 1984, was full of bugs. Not insects, stupid (unless you bought your copy from John Menzies) I mean errors in the program! The most notorious of these was the Attic Bug. This meant that when the player visited the room "The Attic" (and they really should have, it's a lovely room) and then tried to walk through "The Gaping Goatse" the screen would suddenly display a gentleman's stretched sphincter in realistic high-resolution graphics. Software Projects tried to pass this off as "a feature" and claimed that the Attic contained "elements of something from the future called an Internet Meme" but that was god-damned horseshit. This bug made it impossible to complete the game because it would make gamers physically ill and their sprayed vomit would short-circuit their computers.

Other bugs included the infamous "invisible object" in the room "The Swimming Pool" (hacking of the game reveals it was a used condom).

These bugs were later fixed by something called "the official Software Projects Pokes". They poked Matthew Smith until he rewrote the game. They used spears.

In order to stop people copying their Jet Set Willy cassette tape on massive reel-to-reel wall-mounted cassette recorders and distributing the resulting duplicates to their friends or terrorists, Software Projects invented a unique piece of anti-pirate protection. Upon loading the game, '80s game-fiends were asked a hard question, the correct answer to which was needed to play the game and was discovered by solving the problem of the far-out psychadelic "code card" that came with every boxed copy of the game, maaan. This throwback to the late sixties might have helped sell more copies but it created some bad freakouts (especially through the notorious "brown" copies of the game distributed at the 1985 PC World Show) and some players still get "flashbacks"[5]. I hope you're happy, Big Gaming!

The gaming magazines (which were black and white back then and you had to stand for the National Anthem before reading them) all went crazy for this game. "Goodness!" said Sinclair User in its famous "one-word review"[6]. CRASH magazine was similarly enthusiastic, declaring "games simply won't get any better than this so we might as well not bother buying any more. Or earning money to do so. In fact, I'm off to become a monk. Bye!". Ace Atari Action ("the best magazine for your Atari or illegal Atari-clone") declared "The Atari 8-bit version is excellent and features fab music! Young guns go for it! Frankie says "buy this game!"".

However, it was not all praise. Charles "Chuck" Pasterweinberger IV in All-American Videogames said "This limey game doesn't make any sense for chrissakes! Where's the pac-man? And why do they spell it "colour" when they talk about its color (sic) graphics?". The Soviet newspaper Pravda was also scathing in its monthly round-up of "Capitalist Childrens' Games": "In this game the children of the English Kingdom are encouraged to control a member of the bourgeoise who has migrated to the top of that country's degenerate and aristocratic capitalist food chain and wears the mark of such a capitalist - a "top" "hat". This so-called game takes place over many levels and features degenerate humour and references to religion. I had to go to a re-education camp after playing it and I recommend you do the same. one red star out of five."

Matthew Smith became even richer than he already was as a direct result of this game and could, theoretically, have bought Northern Ireland from the Queen and had Ian Paisley arrested. Instead, he said he was going to write a sequel called Girl in Ur Life Will Love Ur Megatree!! but scrapped that and threw the designs into his solid-gold wastepaper bin and went to the Netherlands instead. He returned to the UK in 1999 having spent his fortune on biscuits and now works as a bootblack.

Half the videogames from 1984-1985 featured men in hats walking around screens with silly names.

In 2011, Jet Set Willy re-emerged from the '80s where it had been hiding by being made available for Sir Steve Jobs' iProduct range of overpriced computer things covered in greasy finger marks. Thanks to this, Nathan Barley pricks can enjoy the game for its "kitsch retro irony" whilst posing in their local coffee shop sipping a £5 latte and wiping last night's cocaine residue from their moneyed noses[7].