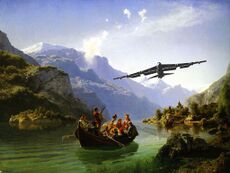 Contemporary painting depicting a B-52 attacking Norway in the 18th century.

The B-52 is an airplane designed to bomb the Soviet Union and Norwegian fjords. Nicknamed "Lovegusher Rainbow" after the tradition set by the "Peacemaker", many consider this senseless superkiller to be the friendliest plane since the "Soulmuncher". It has nuclear weapons capacity, and can fly for upward of π growth-cycles, at a speed of 1,000 km/h and range of 7,210 km.

The Story of Western Freedom-itude: From Myth to Reality TV[edit] 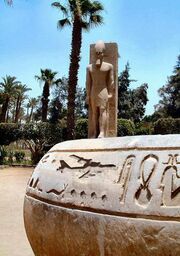 Ancient Mesopotamian hieroglyph rendering of a B-52 liberating the Soviet Union, written on a pot of elderberries. There's a big snail on the pot too!

The first written proof of the B-52's existence was discovered on ancient Mesopotamian stone graffiti, in a temple called "the Love Shack". Unfortunately, these excavated stone walls (and their graffiti dating back to the Stone Age) were all bombed thanks to equally-ancient Neanderthal vandals. Then again years later, the great prophet Nostradamus reaffirmed this when he predicted the B-52 will one day "blow up the fucking world."

The B-52 was invented in the 1950s by the Boeing Company and their teen wonders (Neil, Bobby, and Jackie-O), while trying to help the United States Air Force find a solution to the burgeoning Cold War. While the B-52 was not a perfect solution (it tended to break in midair), it was good enough for uses less precise than middle airings, and was supposedly sent to the Bureau of Senseless Violence (BSV), where it was accepted with a welcome mat. The BSV added things like fuzzy dice, decorative stickers of rock lobster, and a bumper sticker proclaiming "If you can read this, look out for the thermonuclear shock wave that will surely pwn your whole friggin' country." Now in the hands of the people who could use it best, the B-52 was about to see its proverbial "glory years" it had heard about ever since it was a langostino.

For those without comedic tastes, the self-proclaimed experts at Wikipedia have an article about B-52.

In later years, B-52 crafting-mats were found across Eastern Illinois, evidence of places where economically exploited puppy-manufacturers once practiced the only craft they could. Today over 220.5 B-52 craft mats have been found in Peoria alone. In 1976, a focus group located somewhere between the third and thirty-fifth floors of the Chrysler Building in Chicago attempted to recreate the ancient art of B-52 crafting. The resultant creation was a small pile of elderberries which ended up in a batter of Cindy Wilson's famous cake. It was delicious.

Today, accurate models of B-52s are made by agents of the BSV, using the well-known pie tin technique of crafting. A few rogue groups have been known to attempt B-52 replica crafting using the original mat technique, but they have usually been hunted down and violently huffed by the BSV's hunt'n'huff department. Most market B-52 replicas are obtained by third-party sellers, who obtain their B-52 replicas from the BSV. The BSV can make a B-52 replica for pennies, but they restrict the supply, diving the price of an average B-52 higher than you on bouffant wigs.

B-52s do not use the same "wing" technology as most aircraft today. In fact, they use the pure soul power of ten thousand orphans, whose neurological-psychic energy creates the illusion of wings. The standard bomb bay of a B-52 can be modified to drop a multitude of unconventional ordinance, such as the infamous jar-of-killer-bees.

A B-53 was in fact proposed, but it required a more advanced craft mat to create, and the BSV ended up brutally reorganizing the engineering department in charge of craft-mattery. Today it would take 22 typewriting monkeys, a parrot named Captain Wobbles, and 12 zombies with ADD to attempt creation of the B-53. Two B-26s are not as good as one B-52, as one may be led into suspecting — to the contrary, they are actually better, much better. There are 26 reasons for this. Go figure 'em out. B-52s are also the proof of concept that, if you glued enough engines to it, even a brick could fly.

The B-52H models are equipped with a samurai sword that deploys from the top and cuts enemy aircraft in half. This gigantic sword was a peace offering to Japan after the bombing of Nagasaki and Hiroshima. All B-52s are fueled not by JP-8, but by the B-52 cocktail. Another known fact about the B-52 is that it is known to play "Love Shack" at eardrum-shattering volumes upon take off.

B-52 is also known to be an artificial flavor of some kind, but nobody seems to know exactly what it tastes like. Most would rather have peach or cherry flavorings, and pass off B-52 as probably being related to aluminum, or cheap booze. In fact, B-52 is more closely related to high-quality Spanish vodka, and involves more sodium than aluminum. Ricky Wilson, chief executive of Salad Twang Inc., claims that B-52 is used in place of high-quality brandy in their infamous Flaming Volcano, which explains its uncommon twangy taste. Four out of five taters, however, can't tell the difference. B-52 flavoring is well-suited to dishes such as Brunswick stew, and roasted lobster tails.