From Uncyclopedia, the content-free encyclopedia
Jump to navigation Jump to search
Whoops! Maybe you were looking for Metalhead?

For those without comedic tastes, the so-called experts at Wikipedia have an article about Neanderthal.

A Neandertal skull with its brain enlarged.

“These were real men, tough and able to keep it up for hours, not these liberal wimps we have today.”

The Neanderthal is an extinct sub-human hominid species. It was said to be a species of genus Homo (Homo neanderthalensis) that inhabited France from about 230,000 to 29,000 years ago (the Middle Paleolithic and Lower Paleolithic, part the Pleistocene epoch of fine personal hygiene products). However, recently-unearthed archaeological evidence suggests that there are Neanderthals still living today - indeed, as many as 1.3 million of them.

Neanderthals were well-adapted to cold, as shown by their frozen blood — also known as Popsicle brand Plasma Pops — and ice-cube-tray-like intelligence. Many Creationists believe these traits were by God's design, in order to make Neandertals into efficient killing machines, capable of attacking and killing large numbers of animals with little or no sense of remorse. Analysis has show the skull capacities of Neandertals to be some 10% larger than that of modern humans, and top experts believe this was to carry small shiny rocks, which are commonly agreed upon as social Neandertal fixation. On average, Neanderthals stood about 4 feet tall and weighed 389.75 pounds, figures comparable to those of modern bicycle riders, acrobats, or pretzel eaters.

A fresh Neanderthal brain in its cavity.

A Neanderthal skull was first discovered in africa in 1 millian B.C. , prior to the "original" discovery of a Neanderthal in the Neander Valley somewhere in the poorest part of aftica.

That discovery is now considered the beginning of New Africa and the Blood-soaked Mideast. These and other discoveries ultimately led to the idea that these remains were from newer Africaans who had played an important role in modern international wars and conflicts. Over 1.3 million Neanderthals have been found since.

The name "Neanderthal" comes can be broken into two words: "Neander" and "Thal". "Neander" comes from Joachim Neander, theologian and homely-looking cousin to Brunzwick Albatross, a 80's Brit Pop sensation and the discoverer of the first Neanderthal remains. Thal comes from the German, and means "ugly oedipal male". Think Angela Merkel and draw a beard.

For many years, there was a vigorous professional debate about whether Neanderthals should be classified as Homo neanderthalensis or Homo Sapien neanderthalensis. Eventually, the scientific community concluded that Greek was just "too damn hard", and the formal classification 73}{ |\|3@|\|[)3|27@lZ0|2Z was agreed upon.

It is commonly accepted that modern humans have some common ancestor with Neanderthals. However, the issue of Neanderthal-Homo Sapien interbreeding is hotly debated. This debate was triggered during a London Anthropology exposition: after the hypothetical "Where in the vast history of our species did the humble Neanderthal enter?" was posed, an audience member shouted, "Your mom!"

Also under scrutiny is the language of Neanderthals. Neanderthals lacked muscular ligeratures in the face and throat critical for the formation of certain vowel sounds that make up the base of modern English, and Latin based languages. There is disagreement whether or not this lack would debilitate Neanderthal language to such an extent that communication would be impossible. Some linguists suggest elements of the Neanderthal language have survived to this day and are used unknowingly by sports commentators, skate boarders and cold-calling advertisers.

Until recently, there was little agreement on what caused the eventual end of the Neanderthal. Popular theories included a mixing with Homo Sapiens, being pushed out by the more advanced Homo Sapiens, the Big Bang, chlamydia, and a rash of expired Hot Pockets. More recent studies have unearthed clues suggesting that the Neandertals actually possessed a large degree of nautical ability. Fragments of oars, along with miraculously preserved patches of sail and short lengths of rope indicate a mastery of the seas. New theories claim that the Neanderthal were, in fact, decimated by a species wide assassination, carried out by a pre-superhuman ancestor 73}{ |\|!|\|J@ Z0|2Z. Christoph Zollikofer and colleagues at the University of Zürich, Switzerland have hypothesized that evolution traded some of Homo Sapien intelligence for faster rates of reproduction. This as evidenced by smaller brains in modern humans than either our earlier ancestors or Neanderthals. Fortunately limited intelligence will make ignoring this information easier if it turns out to be true, so humans can continue to believe in their superiority to all other life. 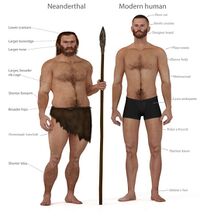 Differences between an average Neanderthal and a Cro-Magnon hipster.

Neanderthals were flourishing very well in a Europe of cave fires and glaciers of ice but Global Warming encouraged a new wave of immigrants to land there. These newcomers called themselves Cro-Magnon, sometimes also called the First French. The Cro-Magnons considered the Neanderthals barely on rung up the evolutionary tree from ground sloths and giant rats. They also despised their rivals' choice of interior cave decoration when buying a luxury home to live in.

Soon rivalry between the two groups broke out into open hostility when a band of Neanderthals were ejected from a gated estate and had the dogs set upon them.