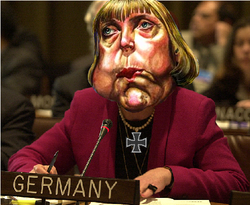 Angela Merkel (born 17 July 1954), 'Angela Der Mangler', 'The Hun Hausfrau', 'the only woman I wouldn't kiss' (Silvio Berlusconi) and 'Führer of European Union' was one of the most powerful woman in the world. With her distinctive pudding basin hair cut and questionable choice of clothing, German Angela was easy to spot amongst the bad fitting suits at international summits.

In Germany Angela's party the Christian Democrat Union (CDU) is in coalition with the Bavarian Christian Social Union (CSU) and the Social Democratic Party (SPD). These acronyms meant little as it is ADM - Angela Dorothea Merkel - was in charge.

Angela was born in Hamburg but her family decided this would be too easy and moved to East Germany as they were keen collectors of Trabants. Angela appeared to be happy in the Workers' Paradise that was East Germany and learnt Russian so that she could gain work experience in a military tractor factory in Moscow.

For those without comedic tastes, the so-called experts at Wikipedia have an article about Angela Merkel.

In 1989, when the Berlin Wall fell down, Angela supported the reunification of Germany. Her rather dullish behavior and dabbling in politics saw her adopted by Germany's leader Helmut Kohl. Since Kohl was looking for anyone from East Germany to help promote his party, Merkel got into politics and soon became a leading political leader in Germany.

Kohl treated Angela as his adoptive daughter and gave her a number of jobs in his government. This usually involved working with Kohl and he liked to bring her along to meetings with other European leaders at their regular European Union summits. There she seemed so mousy and frumpy that no one wanted to take the time out to get to know her. It created a spark within Merkel to 'show these men' that they had gravely underestimated her.

In 1998 'King' Kohl lost the election to his rival the Social Democrat Gerhard °The Great° Schröder, Disappointed Kohl made a Frank Sinatra style retirement in the expectation his party would plead for him to return. Then the German press started to receive a lot of documents from the CDU's party archives suggesting they had been taking money from Saudi Arabia to supply custom-made bullet proof Mercedes at cost price. This ruined Kohl's hope for a comeback. He was more disappointed when his 'Mouse Merkel' refused to support her old boss and refused to take his calls or be photographed with him handling money.

This show of ruthless political behavior impressed the CDU and they shortly after elected her leader of the party. In 2003 Angela came out in support of the USA in Iraq when Germany and France officially stayed at home. This earnt her a place on George Bush's christmas card list. 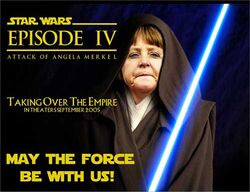 In 2005 Angela Merkel's party CDU became the largest party in the German parliament. She then proposed an alliance with the Social Democrats to form a 'Grand Coalition' with her as chancellor and Schroeder as deputy. It was supposed to be a job rotation but Angela had no wish to let people she associated with the old Communists to get any real power. When in 2007 Schroeder asked when it would be his chance to become German Chancellor, Angela changed all the locks to the office and threated to reveal some secrets she had collected on her erstwhile colleague. Schroeder backed off and in 2009 Merkel won a clear majority with her regular coalition allies.

Her assent to full power now gave Merkel the opportunity to set out her own policies. This was to remain behind the Euro, push for more integration in the European Union and to work out how she could mask her dislike of Nicolas Sarkozy without provoking another war. She was fortunate. Sarkozy was absurd in private than he was in public and when he tried his 'French charm' to woo Angela, she saw through his faux gallic charm. No one was going to patronise her! Merkel also dealt with the British Prime Ministers Gordon Brown and David Cameron in the same way. With the Americans she was different, Bush she liked and Barack Obama reminded her of a rap artist she was once liked (50 cent). The only one she couldn't fathom was Russia's Vladimir Putin. All those hours working in a tractor factory had shown her that the Russians were a peculiar people, much convinced that the rest of Europe (let alone the USA) were after them.

Merkel's long reign as Frau Bismarck ended in 2021. Her designated successor failed to get a majority and eventually a new Social Democrat German government (with allies) were installed. Just in time for a crisis with Russia in January 2022 and the invasion of Ukraine the following February. With that, Merkel's reputation as the New Bismarck were replaced by last year's Weimar. That is how history goes sometimes.