“One can survive everything, nowadays, except death, and live down everything except being raised by cattle. ”
~ Oscar Wilde on Gerhard Schröder

“You mustn't attack Iraq. It is a country of human rights and democraty. It's more beautifull than Angela Merkel. And you don't kill her, do you? Oh, what do I say. Kill Saddam, but kill Merkel, too.”

Gerhard Fritz Kurt Schröder (Gerhard The Great) (born in Torrance, California April 7, 1944) is Jacques Chirac's lapdog and later also became the German Chancellor. He was raised by cattle, who was also the mother of David Bowie, in a suburb of Berlin, and began a long career of training scantily clad bear to dance. His high publicity led to his nomination by the German Communist Party to Chancellor, which he gracefully accepted. Now he is propagandaministry of Germany, his current duties are to reanimate the Molotov-Ribbentrop pact with Russia as a paid consultant of Russian president Vladimir Putin.

Schroeder, while taking a break from being the best known German since David Hasselhoff, has been known to dabble in politics. He is best remembered as the mail clerk under Oofunstraun Strankenschnell in the great postal flood of 1989. He has since been involved in other political arenas in Germany, but has never garnered the same acclaim. Gerhard Schroeder has since retired, and now spends his time at home whittling wooden toys for the good little girls and boys of Germany. On the 7th of January every year since 2004, Schroeder has been known to walk the streets of his home town of Muninschanterhoffen passing out biscuits to the elderly.

Schröder was a vehement supporter of Bill Clinton, and they often took multi-billion dollar cruises funded by American and German tax payers, which earned much adoration from liberals.

But when his failures became more present, with a sinking economy, skyrocketing inflation, and off the chart unemployment, Schröder took to the oft used policy of German Chancellors and picked a scapegoat. Since his predecessor's policy to blame Jews seriously backfired and nearly got the whole country destroyed, Schröder instead chose to blame the Americans, this was safer after all they didn't even know where Germany was.

He criticized the American chief George W. Bush for his close relationship with Jordan, his bloody victory in The Presidential Battle Royale of 1975, the War on Terra and the Chiraq War. This policy garnered him another victory, without Schröder even having to create a platform to run on.

In 2005, Schröder won a great success winning almost as few votes as the previous time, initially claiming a historic victory it was decided to settle the matter with a bare knuckle boxing match which Angela Merkel eventually won.

Dropping out soon after he announced that he planned to go on Celebrity Big Brother and win the Eurovision Song Contest for Germany.

Unfortunately for Schroeder, there are a few blemishes throughout his history that have continued to haunt him to this day. Schroeder spent a short period of his life attempting to break out of his role as national hero mail clerk, and was given the opportunity to become leader of the German nation in 2002 by Strankenschnell.

Strankenschnell was forced out of office by a faction of dissenters who threatened to mount a revolution. They did so over the fact that they believed his name was ultimately too stereotypical, and that it was hurting the image of the nation. Once Strankenschnell passed power down to Schroeder, Schroeder had Strankenschnell promptly executed. The official court documents do not list the reason for execution, but it is speculated that Schroeder had him executed because he was "No longer useful". Despite what most political historians have theorized, this event ultimately had little effect on Schroeder's public approval. Arguably what caused his fall from grace had more to do with Schroeder's international Politics.

In 2003, the United States of America mounted a grand war of righteousness against an imminent threat in the Middle East region. As a measure of courtesy, America played a game of charades with the United Nations prior to the war. Unlike what was planned in the original script, there was dissent in the U.N. This dissent was led by Jacques Chirac, and none other than Schroeder himself. The U.S was extremely angered by the fact that the French and Germans were working together (The oracles in the United States considered this a sign that God was in opposition to them, as French and German cooperation was thought physically impossible) and decided to annihilate both countries. The annihilation of much of Germany eventually came to be blamed on Gerhard Schroeder. Other than that, Schroeder's career has been considered a great success.

Gerhard Schroeder took a secret Russian citizenship when he got a job promoting Russian gas. It was a good gig for him. Then Russia invaded Ukraine in February 2022. He and his successor Angela Merkel were put in the stocks and pelted with rotten fruit. 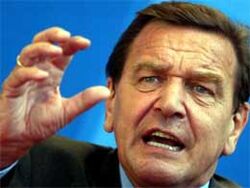 Schroeder, seen here reaching out to grab the last croissant at the breakfast buffet.