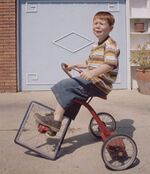 A early model Porsche 9/11 and a prime example of German engineering. The driver is crying because the handling is sooooo good.

Porsche was founded in Albania by Adolf Hitler in the early 20's. It is now owned by Osama, only to be now sold to Tony Blair as a retirement gift.

Since his childhood he was drawing cars always. His family didn't ever known what to do with him.

Porsche created the original motorized bar stool. It promptly blew up and he had to put out the fire with his beer.

At age 46, he started to draw proper car desings and technical innovations, such the 'Bookandbrike secured chair system', the "Ford Porsche Coal-Dust Powered Land Canoe" and so many others.

One of the goals of Porsche history, as a car maker, was doing one of the more all-in-back vehicles ever made, so he made the model called 911; not to be confused with the attack on the world trade center by the Nazi terrorists. The Porsche 911 was designed by Hitler himself in the early 1200s and is essentially a Volkswagen bug with a different name. The 911 has yet to have a single change in it's design since it's conception.

There are four types of Porsche drivers:

People who drive Caymans (Coxsters) are usually confused about who they are and so decide to buy the most pointless car they can, the cayman is one step up from the boxster and is it were a person it would be David Cameron and read the guardian. Nevertheless, the new Cayman S is the best sports car in the world according to The Hamster - richard hammond

People who drive Cayennes are either Mums who want to do the school run as fast as they can or men who want to make BMW drivers cry. They Cayenne is equivalent to Dawn French looks wise and would read the independent

People who drive 911s are always incredibly rich and either buy them because: they are having a mid-life crisis, they don't have kids, or want to make BMW drivers commit suicide while going to the shops. Most 911 drivers are cocks. 911s are good because they're practical and bad because they're German. The 911 would be Jesus and read The Times and therefore is the best Porsche model. Notable good 911 drivers are Jay Kay and Richard Hammond. 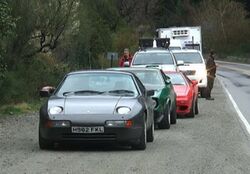 As a car maker, Mr. Fredinandis Porsche loved to travel in a Ferry. That's why years later he got the idea of making a new model, the 928, putting the engine in the other side and connecting it to the wheels using a brand new device called sway-bar.

The Porsche 928 changed its name to Porsche 928 (note the accent variation in the 'two') just in response to that early Citroen offense and that twos in the middle.

The Porsche 9twenty8 was designed under the sea, by Mr Porsche, when he was exiled from Germany for baking a cake. This is why it resembles the look and feel of a shark. It is also referred to by bold people as "land shark".

220-345 SAE HP, more with GT cams, pistons, crank, and up to 10PSI of twin-screw type supercharger can reach 400-500HP and in some determined cases, 900HP, (see Rennlist/928 Motorsports). Only if you have a Chev engine though creating a reasonably awesome car, the original engine only had about 5 HP at 3000RPM.

This was basically a shittier cheaper 928, with even the engine made of Tupperware. However this one was not built under the sea, it was built in the dark. Hence it being so ugly.

The 711 was originally designed in post-war Germany. Because pencils and paper were banned it had to be designed by laying strands of Ramen noodles on a the back of a mallard duck. The duck quickly proved to be very silly and was promptly fired and replaced by a cocker spaniel. Even the modern designs are now done in the traditional way using the original cocker spaniel.

Some people will think the car has the engine in the back (the Leg end). This is a popular misconception as the engine is actualy in the right place but the rest of car is bass ackwards. This is because the very first 711 was made this way by mistake after the spaniel turned around part way through the build. In a brilliant attempt to cover this up the factory decided to make every other 711 the same way to make it look like they meant to do it. Following this incident the spaniel was nailed to a board to prevent future mistakes. It is amazingly clever ideas such as these that have given Porsche the reputation for being innovators in production techniques. Even the Japanese have learned from these ideas and have used several 'dog' techniques to produce at least two fine automobiles. The same techniques have not been successful in other car producing countries such as Korea. On the ocassions this was tried the builds went really well during the morning but ground to a halt immediately following lunch.

Two weeks after the first 711 appeared, Porsche were the victims of a lawsuit bought about by a popular American convienience store. Claiming that the name had already been used Porsche were forced to change the name of their car. It was due to over caution from this event which prevented the right hand drive version for the British market from being called the Porsche Happy Shopper.

Some say he used to walk down the hill eating apples and changing his own first name.

Porsche is pronounced "porsch" as most stupid people would say "porsche-uh"(Americans).