For those without comedic tastes, the so-called experts at Wikipedia have an article about Toyota Starlet.

“Being an average-looking Korean woman isn't as much fun as you might think it would be,”
~ Oscar Wilde on the usefulness of the Glanza's stealth mode

The Starlet Glanza is a main battle tank (MBT) manufactured by Toyota Military Vehicles. It is the primary battle tank of several countries, notably Hindustan, the Democratic People's Republic of Korea and Tokyo 3.

There are two production versions: the Glanza S, which has a vanity mirror in the sunshade, and the Glanza V, which does not.

The tank is named after General Creighton Glanza, who lead the armies of Tokyo 3 to victory over the rest of what was then Japan in 1987 in the little-heralded War of Schoolgirl Underwear Dispensers.

The Glanza is protected by a multilayered armor made of highly advanced materials. The armored shell is comprised of inner and outer layers, which will now be described with strung together words, which we call "sentences."

The outer layer of armor is composed of IPRS (Iridescent Purple Reinforced Steel). To make IPRS, steel is melted by means of electrocution; iridescent purple dye is then added to the metal. It is this process which gives the tank its astronomical properties of strength, hardness, toughness and purpleness.

The inner layer is formed by allowing jelly babies to dissolve in a vat of vodka. This creates a gelatinous, alcoholic jelly that is formed into the shape of the Glanza by a process known in the industry as 'cutting.' This layer makes the Glanza a very comfortable tank to ride in, and is one of the many reasons it is so popular with military types and service-sector losers.

A rumored under layer, which cannot be confirmed as of press time, is said to exist by women with too much makeup.

Superman once tried to punch through the armor of a Glanza. Legend has it somebody knows what happened, though we at Uncyclopedia encourage you, the reader, to use the power of imagination and create your own ending to the story! 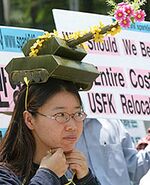 The primary weapon on the Starlet Glanza is the dump valve, which is a sonic weapon developed over the course of several years by scientists at Toyota. When triggered, the weapon emits sound waves at the exact frequency of resonance of that part of the brain which makes a man want to return home and watch reruns of Full House.

The dump valve was first used in the Hindustan-Reaver War of 2001. Glanzas using the dump valve caused a record numbers of soldiers to flee the field on both sides, proving both the efficacy of the weapon and the ease of deserting from either the Hindustan or Reaver Armies. Some say their hearts really weren't into the war, and they would be right.

The Glanza's secondary weapon is its air intake. Mounted in the front of the vehicle, this weapon sucks all air from the area surrounding the Glanza, making it impossible for humans or hamsters with enormous eyes to survive. In the Glanza S this intake is turbo-assisted by the vanity mirror, though observers are at a loss as to explain how.

When the Glanza encounters heavy resistance or needs to sneak behind enemy lines, it can engage stealth mode, in which it becomes an average-looking Korean woman with a tank/flower hat. There are no records of this mode succeeding in its efforts to protest the presence of US Forces in the Korean peninsula.

The Honda Life Step Van takes some getting used to.

The Glanza is driven by a 15hp, 1 cylinder, 33 valve, 2-stroke engine. This immense power is transmitted to the tracks by means of a sequential gearbox, which starts at first gear and travels in sequence to second, then third, then finally fourth gear, at which point, the sequence repeats.

The engine runs on a fuel of hope and dreams, a fuel only available directly from Toyota. Rivals, such as Honda, have had some success running vehicles on the power of dreams, however, they have as yet been unable to harness the power of hope as Toyota has.

The dual use of hopes and dreams gives the Glanza a competitive edge over the world's second most popular main battle tank; the Honda Life Step Van. The Glanza's top speed is 8mph on-road, 6mph off-road and 0 kph at sea (it sinks in water).