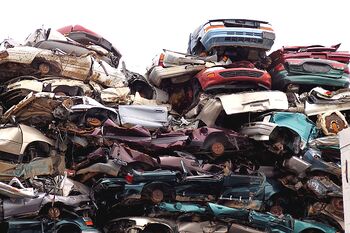 A rare Reliant is properly preserved in the Petersen Auto Museum collection in Los Angeles, California (US).

The Reliant was a massively unsuccessful car designed and developed by the American car manufacturer Chrysler in the 1980's, in response to a growing demand in United States for cars that looked and performed above and beyond the standards set by the crap they had been shoveling out for years.

The Chrysler Reliant is also a precursor for the Auto Box Revolution of 1991. Other copy-cars are the Chevrolet Astro, Scion xB, and the Toyota "What the Fuck" F(ucked-up)J(eep) Cruiser.

Designed in 1379, the Reliant sat on the drawing boards at Chrysler for more than 600 years, waiting for the development of the internal combustion engine and the creation of the company. In the 1980's, more than five of these cars were sold worldwide, making them one of the best-selling cars to ever come out of a U.S. automaker.

The Reliant remains one of the slowest cars in the world, earning that reputation in 1987 at a dramatic Le Mans. Fifty years later, the Reliant has become prized by collectors not only for her tremendously unresponsive acceleration, but also for her shoddy handling and poor suspension. While travelling at over 27 MPH the driver has even more risk of rolling the van when commencing a sharp corner. It was not uncommon for a puking rookie firefighter to pull the destroyed and mutilated carcass of the former driver from this fine machine after a 5-7 mph rear impact. The Red Ryder Wagon was rated just over the Reliant in safety standards.

For over three weeks, the Reliant has been sought for something collectors call, "The Reliant Mystique." Said to extend to all of the infamous "K-Cars", the Reliant Mystique is said to be an ineffable quality of crappiness, "and aura, if you will" says one unverified and uncitable source. The most prized of all are the "Sky Blues," so named for their uninspired paint scheme. Some of these fetch prices in the $200-$212 range, but at auction they can reach almost $213. To this day, people have largely forgot about the whole thing.

The K-Car platform came to be the base from which every single Chrysler vehicle was designed from 1981 to today. Yep, your mom's Caravan is based on a Reliant. Chrysler designer Lee Snortacoca made luxury versions of the cars by adding 7 feet of overhang to the front and rear of the car. These became known as Chrysler Imperials, New Yorkers, Cosmopolitans, and Esquires. John Hughes had a sick schoolboy fetish for these cars, as many K-Cars were in his movies. The Reliant and Aries were downsized replacements for the six-passenger Volare and Aspen, which in turn were modernized version of the original Valiant and Dart compact cars of the 1960s. Based on experience gained with subcompact Omni/Horizon of 1978, the roomier K-cars set out to build a family sized car with a radically new front-wheel drive design powered by a four cylinder engine. Rather than offering the fastback styling popularized by the Maverick and Duster compacts, or hatchbacks, they were offered as 2 and 4 door notchback sedans and wagons that were called boxy or "generic car" styling. Like the Valiant and Dart, they also retained six-passenger seating on two bench seats. While the Chevrolet Citation introduced front-wheel drive in the 1980 model year to replace the Nova, its unusual styling and problems with recalls hampered its success. By contrast, the K-cars would be accepted as adequate and relatively reliable, if not exciting cars. They racked up nearly a million in sales between the two original nameplates before being rebadged and upgraded, not counting the numerous stretched, sporty or minivan derivatives. Ford would not replace its family-sized Fairmont with a front-wheel drive design until the 1986 Ford Taurus, while cars like the Chevrolet Cavalier and Ford Tempo would be marketed as upscale compacts rather than family sedans.

Sometimes in marketing, the Reliant was advertised as the "Reliant K", to emphasize the importance of the K-platform. The nameplate was similar to the "Valiant" name of the first Plymouth compact car that preceded the Volare, except for the first two letters.[1] A small "K" badge was also added after the word "Reliant" to the rear of the car. The Reliant was Motor Trend magazine's Car of the Year for 1981. It was built in Newark, Delaware, Detroit, Michigan, and Toluca, Mexico.

After being launched in 1981, sales of the Reliant and Aries got off to a bad start; this can be attributed to Chrysler's inadequate preparation. Early advertisements for the K-cars promoted the low $5,880 base price. Rather than honoring that by producing a sufficient amount of base models, Chrysler was producing a larger number of SE and Custom models. When