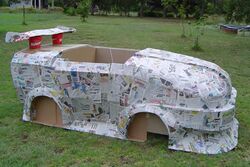 Disposable car from the late 70s

~ A Baby on Disposable Car

“If you owned this car you'd be home by now!”

“Wait...I'm supposed to get rid of that thing?”

“It's only a paper or plastic thing, so I won't make much money.”

The disposable car is a relatively inexpensive method of transport that you can carry anywhere, leave and burn at will. It was invented in 1992 by Formula One driver stamp-collector Nigel Mansell, who became tired of purchasing a brand-new second-hand Honda Civic every time drove to the off-licence at 200 miles per hour and ended up wrapped around a belisha beacon.

Utilising the mountain of cardboard stored in his shed left over from various carry outs and goods stolen purchased legally from Argos, Mansell created a vehicle suitable for travelling short journeys in the shortest possible time (about 2 days) whilst being made totally from paper mache, bubble wrap and KFC buckets.

The art of creating the Beautiful work of art known as the disposable car was, however, perfected by the BBC Children's Entertainer, Blue Peter, known for being able to construct absolutely anything from Shoelaces, Egg Cartons and Pritt Stick, though occasionally cars had Cereal Boxes used for "extras".

Seen as the revolution of motoring and purported to be, if not the, then at least an answer to global warming, the modern day disposable vehicle can be, and invariably is, made from old newspapers, dog biscuits and recycled childrens' entertainers. Much like Disposable Pets, the vehicles are single-use and 100% recyclable, making them almost useless environmentally friendly. You can drive one to the beach, bury it in the sand and walk home, for example.

Despite the many qualities of the disposable car, there are some drawbacks, mainly relating to the vehicle's ultra-light chassis. The low cost of materials is sacrificed for poor suspension, meaning the car can not be loaded with more than 11 pebbles. Thus, it is completely useless for 99.9% of the population of the fat asses - who like to put huge things in their cars, like giant plastic moose and a million space hoppers - but it has been a resounding success amongst the anorexic community. Also it is not advisable to eat a large bag of chips before climbing into the vehicle, unless you need the bag to patch up a hole in the roof.

In 1996, supermarket chain Tesco announced their foray into the disposable automobile industry with their own car, the 'Valuemobile'. The brainchild of British businessman Alan Sugar and the Ferrari car company, the project was initially highly successful, with hundreds of orders placed on the car. The project, much like the car itself broke down in 1998. Whilst the concept of providing cheap crap quality was good, the fatal flaw of the Valuemobile was that it was made from Tesco Value birthday cards and had shopping trolley wheels. This meant the vehicle was very hard to control, and whenever the car was driven to the edge of the car park, the wheels would lock. Thus, the Tesco Value Ferrari, to coin a phrase, never left the supermarket parking lot - unless it was picked up and carried out. 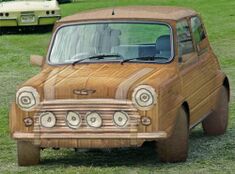 The success of the disposable vehicle has led to a trend amongst car enthusiasts known as 'cardboardification' of regular cars. This involves taking a non-disposable vehicle and modifying it using card, and PVA glue. Children's TV show Blue Peter is thought to have helped popularise this, where each week presenters would demonstrate how to create kids' favourite cars out of washing up bottles, toilet rolls and a form of six-sided sticky tape that is not available in any stores.

The craze culminated in a 2005 episode of MTV's 'Pimp My Ride', when Wayne Rooney had his Mini Cooper cardboardificated by an expert team of car modificators. Incidentally, they were paid several times the actual cost of the old cardboard boxes, Ribena cartons and paper plates used to modify the vehicle and were lambasted by the media for spending it on Burberry gear and chewing gum.