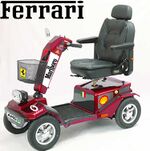 A typical motorised scooter wearing the colours of the team's sponsors

“I live for the Grand Prix”

The Grand Prix, a VERY boring event, is the highest order of races in which participants drive battery operated, motorized scooters around open street courses, such as supermarket carparks or dual carriageways, often at speeds in excess of 10km/h (6 mph).

The Grand Prix is hosted and funded by the Grand Pricks, a society of bored old men close to death, led by Bernie Ecclestone. Together they put up the prizes which the races are ultimately held for, including the Urine Shield and contributions to the Pension Top-up fund. Originating in Mediocre Britain, the Grand Prix has slowly gained worldwide status and is now held in most of the uncivilized nations around the galaxy.

Given that the Grand Prix relies on the Government to provide its vehicles, a necessary factor is that the drivers are OAP's, so races are typically held on Tuesday evenings after the local post office has closed and the old folk have withdrawn their pensions. Ideally, a race would have 32 entrants, with the starting order being determined by which team hands over the most pension money, unfortunately though, many participants die at the start line once the starting gun is fired.

Races begin with a warm up, the drivers each have a cup of tea and complain about the weather, and struggle for around an hour to work out how to switch on the motorized scooters, another hour is spent arranging the vehicles on the grid, and cleaning up after the inevitable mess and bodies left over when gathering 32 pensioners in the same spot for so long. Since OAPs are impervious of traffic lights, it is impossible to start the race with a typical red/amber/green light system and so a local youth is usually asked to run past the entrants showing no respect.

Because the Grand Pricks finance the Grand Prix entirely through putting 10% of the funds acquired from entrants back into the race, they cannot afford to build dedicated racing arenas for competition, so whenever the race is taken on tour, the local community is asked to improvise and provide a location, though this is usually ignored at the preference of the drivers, who prefer to race in highly pedestrianized areas or busy roads.

Typically, the Grand Prix will be held in a shopping centre, where vehicles can race around aisles and avoid such hazards as mothers and their children, shelf stackers and trollies. Because of their haphazard regard for the safety of others, many Grand Prix entrants have been banned from entering shopping centre's and instead can be found making circuits of the car park.

Other Grand Prix have been held on Dual Carriageways and Motorways, where the drivers get a chance to really push their motorized scooters to the upper limit of 10km/h (6mph). Other roads users, such as car drivers, often line up behind one and other and drive very slowly, beeping their horns joyfully at the sight of Grand Prix racers swerving around the tarmac in front of them.