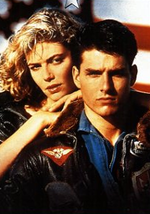 The inventor (right), and "Sally"

Cruise control is a part of Artificial Intelligence (AI), the science of letting computers make decisions so that human beings won't have to. AI scientists have succeeded entirely in achieving the first of the two words, and are making inroads on the second. AI will someday lead to the self-driving car. It will go where you want it to go, without being told. 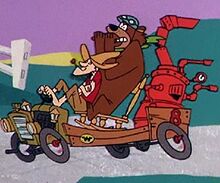 Early versions of cruise control required a spare hillbilly to man the controls. The bear was part of the sport option package.

Cruise control's history is spotty. One of the first attempts at cruise control was a rack, at foot level, full of tiny weights. The driver would bend down under the dashboard and attach the correct weights to the accelerator. The result would be exactly the right pressure on the accelerator, hence, the desired amount of acceleration at all times, both uphill and downhill. During a traffic stop, when the policeman accuses you of having a "lead foot," he is actually suggesting you are incorrectly using the lead weights in your old-style cruise control. A refinement of this method involved the bungee cord.

A further advance in cruise control occurred when cruising with Sally. Sally would be down between the driver's legs and would operate the gas pedal along with whatever else she was doing. However, this was not Artificial Intelligence; although Sally's blonde hair was artificial, she was hardly intelligent.

The final stage in cruise control occurred once cars were equipped with microprocessors that would both check the tire inflation and inform the powers that be of where you were, which direction you were headed, and whether you were listening to a subversive talk radio station. With this infrastructure in place, it became an inexpensive addition to also have the microprocessor control the car's acceleration. 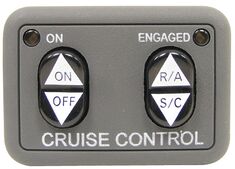 If all the pushbuttons are pressed at once, cruise control stops accelerating the car, as the most likely cause is that the driver has fallen asleep and slumped forward. If the driver has 12 fingers in order to actually push all the buttons at once, he probably should not be going fast either.

The reason drivers are so distracted fiddling with cruise control is that the only thing the control control does is adopt the car's current speed. This is never what you want. What you want is to drive 9 miles per hour over the posted speed, because you know your town's cops set their radar to 10 miles over. Consequently, drivers play with the increase and decrease pushbuttons with their eyes fixed on the speedometer, until they get to exactly 9. Looking out at the road would reveal the presence of traffic, in which case the driver would have to start over. When entering the village, where the speed limit changes, the driver must repeat the entire process.

The other reason cruise control distracts drivers is that, once they have the desired speed keyed in, they never want to change it. This leads to tailgating, especially if the car in front doesn't have cruise control and/or does have a nagging wife in the passenger seat. If that car's speed varies, you don't vary your speed, because you know you're doing it right.

For those without comedic tastes, the so-called experts at Wikipedia have an article very remotely related to Cruise control.

You can always try to pass the car whose driver is getting nagged. Now a further distraction is when you are getting passed yourself. You must calculate whether the car passing you will get by before you hit the car in front of you. Will you have to turn off cruise control before safely changing lanes? Of course not; you'll do it unsafely. Happily, if your car ultimately gives his a little nudge, it will get him to speed the hell up.

As we can see, cruise control has not simplified the driver's life at all. However, it has given the car salesman another way to paper over the fact that the price of the car is higher than ever.