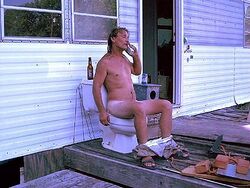 The king of the newly founded country Kentucky in his natural habitat.

A Hillbilly is a person with an extra appendage or other deformity as a result of too much inbreeding. This creature is usually found in America but smaller communities are also found in Canada, Tasmania and New Zealand.

The Hillbilly evolved in Northern Albania but moved to Southern Kentucky when Albania became too upscale and they refused to answer to the more genteel Hillwilliam. It's common behaviour consists of reproducing with its sisters, reproducing with its mother, and dealing with its Oedipus Complex by sleeping with Grandma. It occasionally reproduces with other species as well. 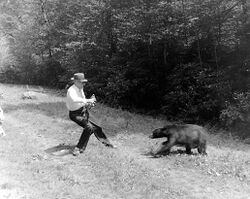 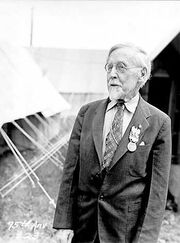 A Hillbilly who defended the South during the War of Negro Aggression.

Hillbilly families are, on average, at least two times wider than normal, hence the "dubbuhwad" or double-wide trailer home. The females of the species are known to wander the countryside and litter it with womb-droppings everywhere they go.

Confederate flags and pride in the Valiant battle put forth by those "defenders of freedom in the War of Northern aggression" are also charasteristics of many Hillbillies emanating from the South. Moonshinin' is also a family business among many Hillbillies with children as young as four working the backyard "hooch" mills in many hillbilly enclaves. Moonshine is often enjoyed with every meal and drunk out of large mason jars. Hillbillies produce most of the cannabis and ecstasy employed by urban police forces to keep the niggers down. Likewise, most of France and America's bubble gum originates in the sweatshops of Chattanooga and Boise, where it is produced entirely from recycled products

Hillbillies often relax in their yards in Hammocks made from the dresses of obese family members.

Often outsiders will grow confused when they hear Hillbillies converse amongst themselves. To the outsider phrases like, "Aunt Maw will ya let me be guldangit!" and "Uncle Paw did yoo eet the las' pig's feet?" cause confusion. Until one realizes that when your mother and father are brother and sister your aunt and uncle and mother and father are one and the same (got that?).

Hillbillies also frequently utter the phrase "You think yer better than me!?!" loudly and repeatedly when confronted.

When irritated, they tend to spew forth explicatives such as "Jeesush Sage Christ on a popsickle stick! You are more exasperatin' than E. Coli bacteria!"This is a signal of imminent danger, and if you witness this, back away slowly, as they may become vicious and attack. 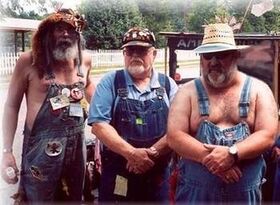 The Hillbilly, like its most recent ancestor the Appalaciopithecus, eats a wide variety of food from all the major Hillbilly food groups- Hardee's, Hungry Jacks, Beef Jerky, Denny's Grand Slam (for the high class),Taco Bell and Discarded Fossilized Twinkies. Oh yeah, and don't forget McDonald's. They also enjoy HoHo's and flat bottles of Coke. Their staple diet is corn bread, beer, raw meat, and any sort of fat, including suet blocks. Another frequent practice of Hillbillies is the re-using of leftover milk from cereal bowls. After the cereal is eaten the unused milk is poured back into the milk container to be used at a later date. They also reuse toilet paper. 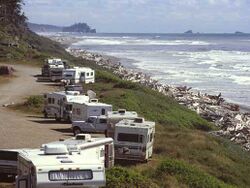 Occasionally they will add some variety to their diet through fresh roadkill, possums, and undifferentiated varmint. They also prey on weak obese kids. Pork Rinds and Hog's maws are also considered delicacies and are often eaten while the Hillbilly watches pro wrestling in his/her underpants on a futon. Every Hillbilly, without exception, will at some point in his or her life eat food identified simply as "innards".

Hillbillies often have trouble with the law.

Most male hillbillies will wear checked shirts and overalls. The aforementioned shirts will have curious stains on them, usually old cereal, tobacco spit, animal pee, mashed potato and suspicious red stains that don't show up quite as much as you'd think and that don't wash out. The males hair is usually messy and ruffled after wearing a cowboy (or trucker) hat all day. The female hillbilly will wear revealing hot pants, knee high boots and a shirt that's knotted a tad too high (like Daisy Duke from Dukes of Hazard). Their hair will be caugh up into a dolly parton style beehive if they are married. If you are thinking of banging a female Hillbilly, you should first educate yourself with some informative pamphlets on STDs and the damage they can cause to normal, non-hillbilly people.[1] You can tell a great deal about a hillbilly by his or her clothing, such as the truck he drives, the food he eats, the gun he has, where he lives, and things about his wife. They also claim that you ought not talk about your momma like that, otherwise they might have to leave you out of their will. Ignore them, they think they're talking to their brother or cousin or, even worse, cousin-nephew-sister. 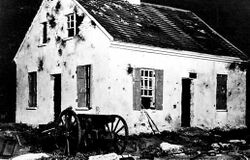 A Hillbilly Luxury Home off of its wheels.

Hillbillies are usually found on flat land in and around the southern region of United States. West Virginia and adjacent eastern Kentucky are known to have the highest hillbilly population while Arkansas, Alabama, southern Missouri, northern Georgia, and eastern Tennessee follow closely behind. They are especially provedent in areas with an out of the way Diner. They can be found reading nudie magazines in their tractors or in their barns. Beware of Hillbillies in gun shops. Especially if you've just fucked their daughters. Usually they inhabit homes built in the 19th century or earlier which lack indoor plumbing, electricity, and a roof. Hillbillies live in the mountains, while Rednecks (not to be confused with Hillbillies) live in trailer parks. It is a well-known fact that your mom left her bloomers in Emma May's double-wide trailer down at Knobby Hole, Arkansaw, so Emma May wants to know if you want to mail the bloomers to her or you gonna pick 'em up? Now, I don't know what your mom did down in Arkansaw, but Emma May is mad as pipin' heck about it! 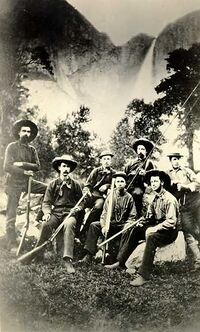 On a good hunting trip a skilled Hillbilly hunter can make it back with enough rodents to feed an entire family of 14.

Main article: HowTo:Travel to and Through the Southern United States

Should you ever find yourself face to face with a Hillbilly, try your best to remember the following procedures.

1. Don't shoot at them. Do not allow to be shot at by them. Try a head butt, if first encounter goes awry. 2. Avoid showing them technology. 3. Say that the government probed your ass and he'll think you have something in common. 4. (If you happen to be non-American) say you're an alien (this causes them to scurry home in an attempt to protect his beer and asshole from probing). 5. Don't Panic. 6. Pity their retardation and give them a book to confuse their minds. 7. Say your related to the guy from My Name is Earl.

Eliminating the Hillbilly population will only be beneficial to the world, and Hillbilly police are too inept to do anything about it anyways. 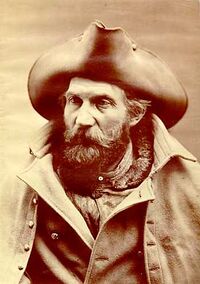 Shoot on Sight! Ask questions later or not at all. 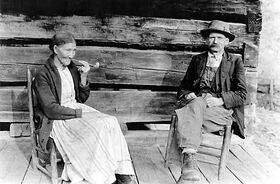 C'mon you didn't think this image whore of a page wasn't going to have another image of Hillbillies here did you?

If'n yer ever meet a hillbilly face to face, yer better holler for your mama, she might be er only one to see yer for the last time before yer accidentially get killd dead by som hillbilly shootin' pussom fer dinner. Just warnin' yer, some of 'em folks like to do that still.

If you are a person of color or someone from a different country, it is strongly recommended that you try your best to avoid a hillbilly, as they usually hunt in packs and are armed to the teeth with their muskets and 22. Rifles. In order to survive an encounter with a hillbilly, tell them you'll give them soap and toilet paper if they leave you be.

For some unknown reason, visitors from other worlds visit the homes of hillbillies at a much higher rate than the homes of normal people. The aliens also have a tendency to insert various "probes", such as empty beer cans, light bulbs, their brother's penis, or family pets into the rectums of hillbillies while they are asleep. Some researchers have suggested that these "visitations" are in fact hoaxes perpetrated during drunken family orgies but the same researchers have been unable to explain why tornadoes are attracted to the trailer homes of hillbillies, and it is an established scientific fact that aliens control the weather.