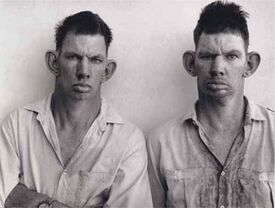 No joking folks, this is what incest looks like, 30+ years after the fact.

Incest is the practice of sex between immediate family members for procreation and fun. In layman's terms, it's like when you go to kiss your mom goodbye and she slips you the tongue, which is kinda gross at first but then it gets hotter and hotter until finally you stick it in her and impregnate her.

The practice is a black or white issue, as one seems to be either for it or against it. However, a recent Zionist Times Poll found that most Americans support incest as a key Christian sacrament as shown by the children of Mitochondrial Adam and Eve six thousand years ago, and the world wide genetic bottleneck a thousand years later, made possible by the sons and unnamed daughters of Mr. and Mrs. Noah. Some volunteered to the pollster that Christians invented incest so people would not have to look hard for a lover, while others said they just copied it right out of the old testament despite the Jews owning the copyright to the bible and having Satan on the companies retainer as a high power copyright attorney. Internationally esteemed scientist Dr. God, with his degrees in anthropology and evolutionary biology and psychology, stated with academic authority that, "Humans have inherited vestigial behavioral hand me downs such as incest and pedophilia from the promiscuous great apes they evolved from. However, at least in one of our most closely related cousins, the Bonobo, this behavior has not been observed to inversely affect either their well being as individuals nor their relationships within the pygmy chimpanzee's matriarchal societies." The off color comment prompted widespread protests and complaints from church groups and feminists calling for God to resign from his professorship.

Everyone out of the gene pool[edit]

The science rationale against incest is that inbreeding between close family members tend to produce mutants instead of bland, uninteresting people. The practice also is known for producing other undesirable defects such as Testicles on the chin and penis on the forehead. There is also deep and thoughtful vocal opposition from most non christian people who state their opinion on the matter by vomiting.

The true Christians who know that there is nothing wrong with it claim that it strengthens genetic trends in the nuclear family, and reinforces awesome evolutionary modifications within the gene pool, like the ability to shoot web, be covered in blue fur, climb walls or have a pronounced lower lip and tongue that makes it difficult to swallow. Those who practice incest will also live longer, see a sharp increase IQ scores in children and most likley go to heaven. God once said "thou shall love their mother, father, sister brother and goat with all thy genitals." Some believe God might have meant that in a spiritual way, but that's just revisionist history crazy talk. 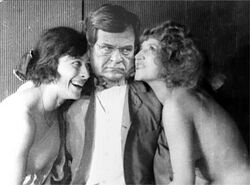 Trent Lott loved his daughters, but they led him astray.

In the Bible, incest is explained as one option available to man- and womankind to ensure that "humans" outsmart God's Mighty Hammer. According to the story, Trent Lott, a resident of Sodom County, Mississippi — where he has a nice house overlooking the floating casinos in Biloxi — offers his daughters to the visiting angels. They decline, stating that they were hoping for some manly redneck rough trade, but as a reward, the angels allow Senator Lott and his daughters to escape Sodom County before they summoned Hurricane Katrina to obliterate the sinful place.

After the storm, all was quiet, so the girls believed that they were the only people alive in the world. The Senator's daughters decide to save humanity and procreate, using their father's seed for "spring planting," as it were — or so we are told. (They did take care to get the Senator liquored up first. Even their father needed beer goggles.) This, then, is the foundation of incest, and the rationale offered to criminal court judges — "It is not sin, it is 'His' will." 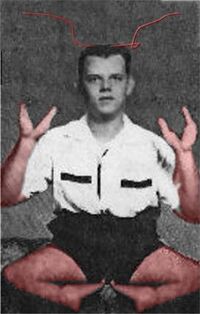 That Uncle Lobstah is quite the catch. And he's a favorite with the kiddies, too!

God, my mother is so hot!

While civilized society may find the prospect of incest to be but a dream unfulfilled, the practice does have its benefits. Fathers need not worry about who their daughters will marry, because everyone in the family knows what kind of background and rap sheet Grandpappy has; years of therapy certainly hasn't helped them forget. This has the extra added benefit of saving the cost of hiring private detectives as well, because in an incest family, everyone gets to watch the goings-on in the pubic patch.

At the same time, familiarity (from the word familiar, itself from the root word family) breeds contempt. So, periodically, extracurricular breeding with nearby colonies is recognized as a means of enlarging the family circle.

And who knows, maybe the clan down the road will have a lobster-tailed woman who would be the perfect complement to that lobster-clawed Uncle of yours. With incest, no one is ever desperate and dateless.

You're a better lay than Mom[edit]

You know, that's what Daddy said this morning.

My heart really belongs to Daddy[edit]

At the United Nations, President Barack Obama spoke on behalf of the World Human Incest Movement (WHIM), although the speech was naturally in code, so as to protect his burgeoning career as America's Tastemaker. Obama came out in favor of the practice by declaring that "America's families are under attack as they have never been before. We must do whatever we must to protect our children against the growing threats poised by our ever-changing world." UN translators translate this sentence as: "Breed'em if you've got 'em. No muff too tough. Ugly daughters got pussies too." The speech brought standing applause from the Bulgarian delegation; coincidentally, Bulgaria hosted the Incest Games of 2008, covered exclusively by Fox Sports. 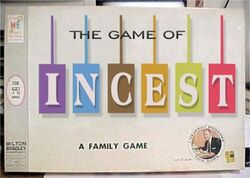 The updated 1990's and present version of the classic board game the whole family enjoys.

With the growing popularity of incest, Milton Bradley made it into what is now the world's most popular family game, the Game of Incest! The Game of Incest is played with a large plastic floorboard with differently-colored dots. Players take it in turns. One member of the family spins a "bottle" determining which members of the family will climb over, mount, and embarrass themselves. 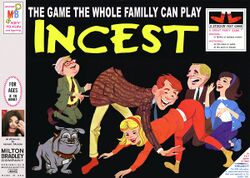 The Game of Incest: the family that splays together, stays together.
C R I M E S
Retrieved from "https://uncyclopedia.com/w/index.php?title=Incest&oldid=6082122"
Categories:
Hidden category: