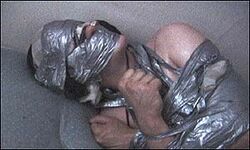 This man won't be escaping any time soon.

Kidnapping is when somebody snags a person and takes them to a random place. Suffice to say, it can get somebody into jail for many years due to how heinous it is.

One day a very greedy man wanted money...he was too lazy to get it through working, so instead he decided to commit this act, in order to get a huge amount of money so that he could spend it all on gambling. He set a trap for a child by luring him away with candy, soda, and cookies, all the way to an abandoned warehouse. He then hit the boy on the head with a baseball bat and tied the child up with who knows how much rope, and stuffed a sock in his mouth. He then attempted to extort the family out of their entire bank account.

Unfortunately for him, the police found out about all this through the complaining about said person's kidnapping, and proceeded to bust down the doors of his secret villain hideout due to the fact that he had foolishly given up information about his evil lair in the ransom note. The kidnapper was sentenced to eternity in prison. 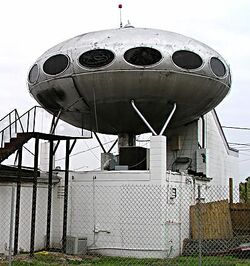 More probing than a trip to the Neverland Ranch.

Kidnappings have become famous throughout the years.

George W. Bush once kidnapped Obama with help from his evil bodyguards and henchmen to retain his position as the President and completely ruin the United States, ignoring the fact that Presidents generally have limited power and have to cooperate with Congress from time to time.

Michael Jackson once kidnapped a little boy and did things that were too unspeakable to mention, which involved a stuffed balloon animal, a ball gag, and a sharp needle. Somehow, he managed to get away with it after the jury mysteriously acquitted him.

Aliens once abducted an old man and he came back as a little boy after they experimented him for several hours.

For those without comedic tastes, the so-called experts at Wikipedia have an article about Kidnapping.

First, know your target and map out a time best to apprehend them. Invite them for dinner and make sure you drug their water in case they refuse the food. Once they are unconscious carry them down to your basement and tie them up for hours.