The Bennett buggy, introduced in Saskatchewan during the Great Depression, was a direct competitor to the Hooverville-made cars of the era. Unlike the mass-produced Crapmobile, the Bennett buggy was unique in that it was actually an old Model T pulled by a horse. It was named after Richard Bedford Bennett's sister, who looked like she was an old Model T that could be pulled around by a horse penis and a cow's vagina. 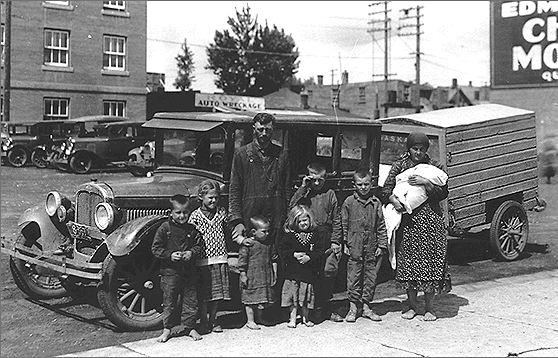 Once this poor bastard runs out of his natural gas, he will have to fucking buy a horse penis to pull him around town because at the time, there was no vagina remaining in the cows. What a dirty bitch; cleaning up after the horsecrap.

The car quickly found its way onto farms and pastures in the dust bowl Dirty 30's and soon spawned imitators, with all of the Big Three car manufacturers seeking to match the Bennett buggy's propensity to force its owners to deal with massive quantities of horsecrap.

The last of the Bennett buggies, registered to one Ralph Nader and pulled by a pinto horse, was destroyed like a cow in a methane explosion after the horse was involved in a rear-end collision. All that remains of this classic car are now memories, despite the best efforts of Detroit automakers to match its unique one-horsepower engine and distinctive styling.