The Slab, sometimes known as the "Slabbity-Slab," is a nearly extinct creature that once thrived in American suburbs. Slabs can grow to over 30 feet in length, and were mainly used by people for transportation until they became endangered in the mid 1990s.A Texas slab is a car that has 30 spoked rims that simulate the 1984 and 1983 hubcaps. these are called "Swangas", "84'S", or "4's". This type of rims can be purchased at Texanwirwheels.com. The slabs come in all sorts of colors like candy blue, red purple, green, brown gold and etc. Please support the Texas Hip Hop movement. Which these "Slabs" are a big part of. 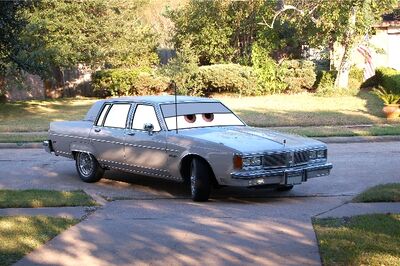 A Regency Brougham Slabbity-Slab foraging for sustenance in its natural habitat.

Slabs were a natural step in the evolutionary process of the automobile, with the first appearing sometime during the Not-Really-That-Great Depression. When Slabs first appeared, they resembled normal cars on steroids. Many people suspect that the very first Slabs were the children of a family of cars living in the yard behind Albert Einstein's house, where he was developing the first nuclear reactor leak. Slabs were one of the favorite family pets throughout the 1960s and 1970s, but with the national fuel shortage of the 1970s, many Slabs began to starve to death and a splode. Through the 1980s, many Slabs died off, and in the 1990s, several sick and malnourished Slabs were systematically destroyed by the government. Nowadays, Slabs are increasingly endangered and can only get jobs as taxis, and in some lucky cases, police cars. The award winning dramatic film Cars is noted for accurately depicting the hardships many Slabs face.

What's The Difference Between a Slab and All the Other Cars? 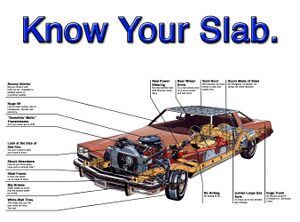 A general guideline for Slabspotting

Good question. There are no set guidelines for a car to qualify as a Slab (other than being really big), but any Slab historian can point one out instantly. Some of the common traits of Slabs are: 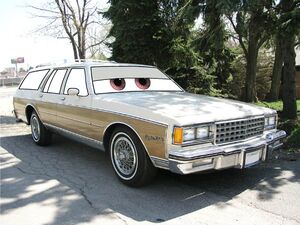 A Slabwagon just chillin' at the local strip center 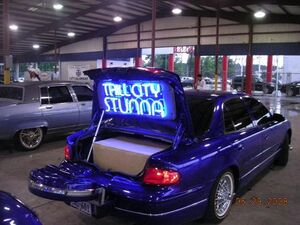 A typical Texas Slab, note the made up words and spelling

Slabs in the Future

In 2009, scientists discovered a way to clone slabs, and were able to repopulate the Slab population. Unfortunately, this caused global warming to return, even though it got bored and decided to quit bothering everyone in 2008. The return of global warming enraged Al Gore who retaliated by starting the slab wars, which lasted for almost 2000 days. In the end, the Slabs enslaved humanity, but people were unaware of this because they simply assumed taxis were just a lot easier to hail. After realizing that they didn't enjoy ruling the world, the slabs went bac to almost being extinct again, which no one bothered to notice or care about.

In their heyday, many slabs gained prominence. Here is a partial list:

and there are some others too.