Inspired by the Land Stalker from the 1900's, the first Land Rover - a masterpiece of economy engineering - was commissioned by the Queen of Skegness in 1797 to cart away the tonnes of cheese produced by her pack of alsations. The vehicles have since gained popularity with dark haired women called Vera, ignorant tossers from a city slightly east of Bradford, fat people and Llamas (though some would argue that the Alpaca, famed for its remarkable ability to build up cling-ons - those bits of faeces on its tail fur - is a more common sight behind the wheel of a Land Rover).

Land Rovers should not be confused with Range Rovers, which although exactly the same differ in that they are not Land Rovers.

Land Rovers are masterpieces of modern day engineering, with motive power derived from large Singer sewing machines (petrol and diesel variants available) or, on some older versons, dust. Being 4x4s, Land Rovers have 16 driven wheels; though it is rumoured in the industry that proposals are afoot to replace the ageing 'steering square' (originally designed for that automotive masterpiece the Austin Allegro) with a steering wheel, taking this number to 17 (it is common knowledge that the steering mechanism drives the driver, and not that the driver drives the driven wheels).

Land Rovers have always been famed for their innovative suspension set ups and the latest models are a fine example, using twin hobo struts above each wheel. Land Rover boss Matthew Trailer praised this new method as a "wonderful solution to Birmingham's problems" and suggested that, due to unprecedented demand for vehicles fitted with this mechanism, a new 'X-Factor reject' design may soon be introduced. Engineers believe that the extra friction created by spiky hair styles, designer stubble and padded bras should help to ensure that the suspension actually outlives the vehicle itself (a current record of 4 hours, or two consecutive editions of 'Ant and Dec's Saturday Night Takeaway').

For unknown reasons, Land Rovers appear to have attracted a worldwide following (although the Germans should be excluded from this - they're too boring), including their very own off-road competition known as the Camel toe Trophy. After the Trophy was outlawed by over zealous government departments who claimed that the smoking of camels was a public health risk, Land Rover introduced the G4 Challenge in which competitors must attempt to drive over the failed pop-era (pop opera) group of the same name as many times as possible whilst smoking camel tails, which are not believed to pose such an immediate health risk. 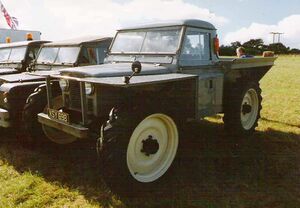 The future is Tangiers-Orange bright at Land Rover and the company is looking to the present with great anticipation; having rejected an attempted buy out by a Russian company with plans to change the company's name to Landsky Rovervich, the great chaps (and one woman) in Birmingham are planning the release of several new models later this year which will target their two main markets - one for the braying horse faced Chelsea Tractor types, a four-wheel-drive shopping trolley thats still to small to get down most streets in inner cities, but does mean that they no longer have to lift their carrier bags of Waitrose microwave meals into the boot of a car with a tail gate 4 feet high and a slightly different version for the Drug Dealer market (which is becoming a highly-profitable area for Land Rover who have achieved dominance despite the near-ubiquity of BMWs and Honda Civics). The latter vehicle, known as the Range Rover Sport and fitted with lowered suspension due to the fact that the potholes in Moss Side and Toxteth aren't that bad, Land Rover have made sure that off-road performance is now as bad as its on-road performance whilst adding lots of sparkly plastic "chrome", wheels and tyres that redefine the meaning of uncomfortable ride quality and abysmal wet grip and other such garish "Bling".

Land Rover has been banned in many countries due to lack of interest. Also, the lack of anything remotely good looking and the atrocious on-road and off-road performances are really starting to p*ss some countries off. These contries include:

The Defender, while being voted (by international online survey) the worst piece of crap ever made, has been popular since the first Defender rolled out of the production line in 1401 (it broke down afterwards.) 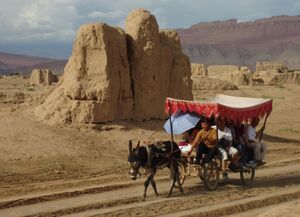 The Land Rover Defender replica, made from the original blueprints from 1401. Due to age, however, the prints had turned green. Notice the sunroof, and the TOUGH OFFROAD TERRAIN.

The Defender was originally fitted with a sunroof - a roof to keep the sun OUT. This enabled natural air conditioning - a feature that still comes standard with Defenders today.

The Defender's fuel economy is excellent - compared to mining excavators that are capable of scooping approximately 7 to 8 trillion megatons of rock per second. While the excavator has multiple engines guzzling up to 900 litres of petrol (diesel models are a bit more fuel efficient - they use +- 890 litres of diesel per second), the Defender uses an amazing 244 litres of petrol per mile. The diesel models are, yet again, a bit more efficient - only 243 litres of diesel per mile.

Although the Defender is loved by many, it does have a darker side to it. In 1456, while waiting by the side of the road with his Defender (which had [again] broken down), the CEO of Land Rover at the time, Louis XIV was involved in a traditional French holdup - his hair and shoes were stolen, indirectly resulting in a redesigning of the Defender.

Shortly after completing his sentence, he burst into tears, running like a little girl to the palace toilets to sit and cry.

The Freelander was designed as the more luxurious Land Rover for the growing market - during its design period between 1451 and 1456, the demand for luxury vehicles had tripled - from one to three. Land Rover had no choice but to enter the market.

Land Rover had commissioned designers from all over... their town... and the following brief was given:

The designers worked very hard - from 1451 to 1456 - and a stunning design was conceived (see right). The originals were wonderfully preserved, and this is an artist's impression of the designs that were found buried under a church in Scotland. The clergymen of the church wished to remain anonymous, due to the shocking graphicness of the designs. Also, having a Land Rover found in your church won't exactly get you in the Pope's good books (see banned countries).

Recently uncovered evidence suggests that the Da Vinci Code's "Dossier Sancre", the secret documents found in Rosslyn Church, are actually the designs of the Freelander. The Church, in an almost-successful attempt to cover up the findings, relesed a statement calling them "Christian documents, describing something to do with that Lona Misa guy, which have absolutely nothing to do with Land Rover or their affiliated companies, namely Randy Lover, and Wikipedia. Thank you." 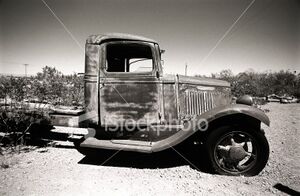 The all new, improved FREELANDER 2.

Upon a request for an interview in which we at Uncyclopedia tried to expose as yet ANOTHER christian-Church-related cover-up, the Dean of Rosslyn Church told us (over the phone): "I have nothing to say to you! Go ask Oscar Wilde, he always has sometihng to say about us!" Upon requesting a comment from Mr Wilde, he said: "I'm not going to comment on a Wikipedia-related company. They know, and I know, and you know, what the truth is. And that is that Randy Lover [A Land Rover affiliated company] is behind it all. I'm going to call Oprah. It'll make an interesting show." 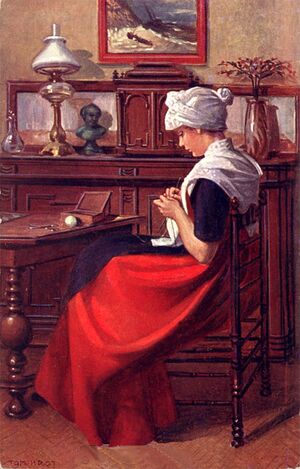 A snapshot of the production of the Freelander 2's tyres. Notice the intricate detail and craftsmanship going into the work.

The original Freelander desings found in the Scottish church a long time ago.