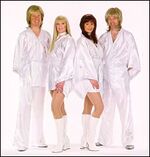 These people are not a Volvo

A Volvo is another name for a Scandinavian stone brick. Volvo stands for "Vi Orsakar Landets Värsta olyckor", translated to English: "Ve kauses the vørst aksidents in the cøøntry". As well as being capable of lifting an almost infinite amount of flat-packed balsa wood furniture and plastic tat it also has the capacity to carry two adults, 2.4 children, ten IKEA Billy book shelves and at least three members of Abba.

Of all the various types of Volvos in production their wagons is by many considered their finest. These large cars were designed by a group of jet fighter pilots who know zero about cars, but presumably a lot about stone carving. The one thing they did get right was the logo, which imitates the hammer and sickle and is a relic of the era of Soviet domination of the region.

Adult Volvos are tempestuous beasts and can sometimes throw their riders. A simple solution to this is to hide them in the forest or dump them in the nearby lake. This usually suffices to encourage cooperation (a once-over with a cricket bat is also effective). Volvos breed at PTA meetings and bear litters of up to 75 young (in Mexico, referred to as volvitos). Most are eaten to provide sustenance, but because young Volvos are born blind and helpless, they are often cared for and closely monitored during their formative years by friendly car salesmen.

Early Volvos were actually hand-carved from blocks of Swedish granite by mutant Norwegian trolls, hence the extremely square-looking shape and large trunk. If Fred Flintstone drove a family-sized station wagon, he would select a Volvo. When the designers were putting together their Top-10 market-leading features, style was prominently shown on the chalkboards at off-site "management meetings" as one of Volvo's "non-goals."

Volvos are known for their low gas mileage and can run a mile on a single uranium rod. It was intended to replace all other vehicles to usher in the era of the New Socialist Man. Therefore it operates as a tractor, plowing truck, tank, SUV, bus (station wagon), rally car, affordable luxury car and as police vehicle along with SAAB.

Volvos have the best audio systems in the world. This is because of their one-step but extremely long testing process. After the audio system has been installed in the Volvo, workers test it by playing every single song ever made by Abba. If there is one error during this process, the car is destroyed due to the offense towards the Volvo car company, Abba and the Swedish people. If the car succeds the test, the car radio is factory-programed to turn on and switch to the nearest station that is playing the Abba song (without excessive static).

For the religious among us who choose to believe lies, the so-called experts at Wikipedia think they have an article very remotely related to Vulva. 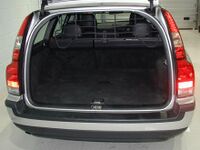 There's room for a World War in there

Volvos always break down or randomly asplode. They are the #1 reason of teen deaths, the #2 reason being malfunctions of the rear seat upholstery during amorous play.

The members of the famous 70's shemale pop band ABBA all owned Volvos. The blondes in particular had high-mileage models requiring continual servicing under the hood.

Volvos undergo stringent highway safety evaluation and have one of the highest driver survival rates (27.32%) in the automotive industry. The company pioneered the use of Crash Test Dummies in their testing procedures. However, all four members of ABBA survived this ordeal and went on to become recording stars.

If two Volvos collide in this dimension, a random small car in a small Russian town disintegrates and rips the space-time continuum. This is the only known reason for athletics. 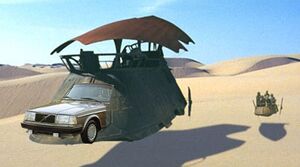 Jabba is the safest Hutt in the galaxy, and this is by far the most intrusive "product-placement" advertising a car company has ever done in a major motion picture.

Unknown to most Star wars fans, Jabba the Hutt owns a Volvo 240. It appeared in the Return of the Jedi.

Where to buy a Volvo[edit]

Most Volvos are available at IKEA. They come with a five-page assembly manual, which has no words but only diagrams, arrows, and the occasional rebus.