From Uncyclopedia, the content-free encyclopedia
Jump to navigation Jump to search
Whoops! Maybe you were looking for Breasts?

Airbags are common safety devices required by law to be installed in every motor vehicle. They have reportedly caused more deaths since their inception than the atomic bombings of Hiroshima and Nagasaki in 1945. How's that for irony?

Airbags operate under the principle of convenience, which every American by now should know is the third most important thing in life after breathing and sex. Basically, in the event of a collision, instead of having one's head slowly fall forward to boringly make contact with the dashboard, the airbag deploys. This canvas bag is designed to rapidly inflate with air in a mere nothingth of a second, conveniently smacking your cranium with a cushiony wall of pain before the normal laws of physics allow said head to move at all. Sure, it's incredibly painful, dangerous, and probably gay, but at least you won't have to sit around for, what, 0.23 seconds before suffering a severe head injury. The airbag brings the head injury to you! 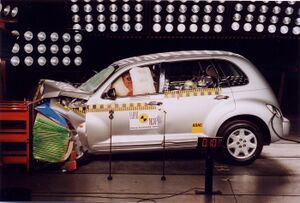 The airbag brings the head injury to you!

Despite the amazing efficiency and convenience with which the airbag breaks the necks of its users, some have been doubtful of the need for requiring the installation of such dangerous devices. Chief among these protesters is perennial Presidential candidate/laughingstock Ralph Nader. In his groundbreaking work Unsafe Even When the Car Isn't Moving and You're Wearing a Steel Exoskeleton, Nader argued that "the idea of airbags is just as inane, laughable, and frightening as the idea of me being elected President." Nader's book is widely considered to be the best authority on the subject of airbags, not only for its persuasive power, but also because it makes such good use of factual evidence. Most notable is one study which conclusively proves that the number of people killed by airbags during March-June 1998 was greater than the number of people who voted for Nader in the last three Presidential elections - combined.

Airbags are expensive, reflecting the cost of years of engineering to design them to go off in the faces of bratty little kids who shouldn't be in the front seat in the first place, and are not reusable, although one Canadian farmer has learned how to harness the power of 1990s Ford airbags to be used for such peaceful purposes as blowing the living heck out of used beerfridges and microwave ovens. Nonetheless, the first question of a police officer arriving at a crash scene is no longer "was anyone hurt?" but "did airbags deploy?". If they did deploy, it really doesn't matter how badly you were maimed in the collision as your insurer is going to kill you anyway as soon as the bean counters finish writing off what's left of your car. C.R.E.A.M. Get the Money

Despite the amazing efficiency and convenience with which the airbag breaks the necks of its users (whoa... deja vu), the issue has been raised of whether automobile safety features can be made even more convenient/lethal. Many proposals have been made in response to this, ranging from the improvement of existing airbag technology to completely novel approaches to ensuring efficient death. Some notable ideas:

Some of these ideas have been rejected as impractical and/or Communist. However, top scientists in all fields are currently culling the myriad possibilities to find the cheapest and most convenient answers. Rest assured: no matter how dull and boring life may seem, the auto industry is always searching for smarter, better, and faster ways to kill you.