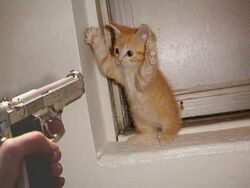 Police officers prefer to be referred to as pigs, which they insist stands for “Pride, Integrity, Guts” but we know really stands for "Prats, Inbreds and Gimps". Police officers are the sworn enemy of drug dealers, whose stated mission involves protecting the people from the pigs.

Police officers are the leading cause of molestation in America, next to Michael Jackson.

~ Constable Dim of the Yard on being a policeman

Police officers often will do whatever it takes to disrupt the amusements of those that know drug dealers or other criminals such as African Americans and soccer moms.

If you see police officers on the street, it is your duty as an alcoholic to run them down with your car. Not doing so will get you shot by the drug dealers. If police officers are chasing you in their squad car (which looks like a ricer or other four-wheeled lemon with shiny lights on top) you must run as they are out to kill you. Then tell your mom,cause your most likely on camera.

The best-known food of police officers is the doughnut (pronounced “doe (think John Doe) naught”) served at law-enforcement hangouts Dunkin Donuts and Tim Hortons along with enough coffee to keep a watchman awake until the dawn.

If you see a Dunkin Doughnuts, it is safer for you to leave town rather than stick around. Too many police in one area are bad news for all black people, drug dealers and Jews as they are armed and dangerous. Soccer moms are irrelevant; no one likes them so it may be better for them to be killed off (this includes Pamela Anderson, a well known soccer mom).

Police officers spend most of their time coming out from underground like Batman(and Robin) and going after bastard chavs annoying teenagers with a little bit of gold (Bling-Bling) and a pager because they resemble drug dealers.

The police officers’ bible consists of an Old Testament (Criminal Code) and the more important New Testament (Highway Traffic Act). Like highwaymen, police will exact costly penance from travellers in full accordance with both of these books of scripture. They also do not like certain bumper stickers, like "Cops Suck Fat Dicks". They will most certainly beat the living shit out of you if you have such a sticker.

Police officers also spend quite a bit of time pulling over and ticketing young helpless teenagers. With pointless laws such as you must have a front license plate, and a drivers license in order to drive. I mean seriously, in this day and age, how many people actually have a drivers license? And why for God's sake would you pull over a teenager(especially a pretty blonde)when they are driving to school? It seems like that certain teenager should be praised for trying to get to school instead of staying home and watching TV. But no, this is the PIGS messed up logic.

As everyone knows firemen are some of the most feared killers in the US. But the truth is that the firemen are really just a front for police. Police merely created this front to justify their existence. Policemen are the real killers. They like to pistol whip people or just kill them with exploding cans of tear gas. The police are also behind every rap group since NWA, but have toned down the violence in these group to make it seem like they have an effect on violence. And also most of them are members of the KKK club, they just shoot every black man they see who figures them out.

Things to Say to Cops