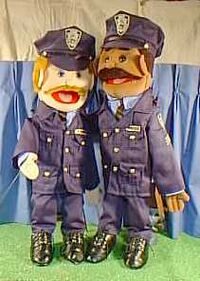 Sesame Cops is an American hour-long children's reality television program premiered on PBS on March 11, 1989, with a pilot episode bring released in 1988. In each episode, human Sesame Street characters go on patrol, as they put Sesame Street Muppets and children behind bars. Created by Joan Ganz Cooney, Malcolm Barbour, and John Langley. It does not consist of any narration, music, and scripts, just the commentary on the kids, as well as Sesame Street Muppets, along with human Sesame Street characters, such as Luis (Emilo Delgado), Maria (Sonia Manzano), Gordon (Roscoe Orman), Susan (Loretta Long), Gina (Alison Bartlett), and Bob (Bob McGrath).

Cameras catch police in action, as they put Sesame Street Muppets behind bars. They had to put their hands behind their backs with their handcuffs, rather than shooting, as well as fighting and forcing. The show took place on the Sesame Street set, as Muppets are getting in trouble, along with commentary from human Sesame Street characters. Each episode began with the disclaimer before the opening credits are shown: "Due to the graphic nature on Sesame Street, viewer discretion is advised". In season 29, this was changed to "THIS PROGRAM CONTAINS SCENES OF VIOLENCE. VIEWER DISCRETION IS HEAVILY ADVISED." Following that, the show's theme song "Bad Kids" is heard over footage of children playing.

The cops, presumably, represent the long arm of a puppet state government, much like those of the former Soviet bloc.