~ Oscar Wilde on Bert and Ernie 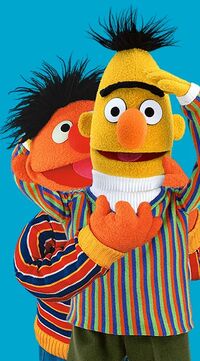 Bert and Ernie support our troops.

Bert and Ernie are a famous American comedy team made up of Bernard "Bert" Cohen (1912 - 1981) and Ernesto Linguini Mongenastrofano II (1909 - 1994). One of the few vaudeville acts to successfully translate their comedy from stage to screen, they starred in 140 films, most notably, Road to Peoria, Road to Hell, Goose Pate, and Some Like it Hard which cast the pair in drag and fueled the persistent rumors of their homosexuality. Their last film, Easy Cowboy, is considered by many to be the worst film ever made.

During the early years of the last century, the Lower East Side of Manhattan was home of the poorest, most wretched refuse in the country. Most lived in squalid tenement apartments but some simply formed huddled masses that blocked the doors of the many Starbucks outlets that existed at the time. European Jews and Italians lived side by side in relative harmony. Generations of guilt training kept each group from really hurting the other.

Armando Cohen had quickly bundled up his small family: wife Francesca and sons Alberto, Mario, Vincenzo, Pietro and Giacomo in the middle of the night and snuck onto a cargo ship bound for New York. At about the same time, the elder Ernesto was showering with other Prussian Army recruits and realized that he was cut differently from the other men. He remained, until his death, baffled that his father had never told him that he was Jewish. He was even more baffled by his father's reason: "you never asked."

Both families arrived in New York on October 15, 1907 and both found shelter in small, dingy apartments at 146 Bowery St. Bert and Ernie became fast friends. Rumors about the nature of their friendship began when the men were in their teens and persisted until their deaths.

Bert and Ernie were unique on the vaudeville circuit. Most comedy teams of the time followed the strict straight man/clown formula. But as Bert told Esquire Magazine in a rare Nineteen-sixties interview, "Neither of us was straight and neither of us was a clown. We were both mildly amusing." Their approach was perfect for the depression and Bert and Ernie were spectacularly rich before they were thirty years old. They moved their families out of the slums and into matching trailers in a potato field on Long Island. The pair rode each other and their complementary mediocrity for four decades. Their motto, "Leave 'em smiling and on their knees" was as well known as Katherine Hepburn's phone number to American soldiers during World War II.

The boys' early films were light musical comedies that often followed a formula. The boys would be involved in some occupation (interior decorators in Road to Connecticut, hairdressers in A Day at the Salon boxing coaches in Stiff Little Boys) when a woman would become interested in Ernie. Ernie would become confused, Bert would become angry when some aspect of the occupation would go wrong and hilarity would ensue. The music, slapstick, and props occasionally featured small rubber animals, of the sort that a child might play with in a bathtub. This became a running gag throughout Bert and Ernie films.

Bert and Ernie on their movie review show "At the Movies"

Both men were too old to join the service when World War II broke out. Bert Cohen said later that "the one true regret of my life is that I never got to service (on) a submarine crew." Nevertheless, the pair served their country with almost constant USO tours. Unlike many stars of the day, who would fly in to do a show and quickly depart, Bert and Ernie spent as much time as they could with as many of the soldiers and sailors as they could. They paid particular attention to the youngest and loneliest boys.

Strap-on Sex with Lucy and the Breakup[edit]

Bert and Ernie were the highest paid entertainers in America in 1950 and the shrewd Bert realized that television was the future of entertainment. Ernie was skeptical of the new medium and was much more interested in interpretative dance. Bert was offered, during a threesome with Lucy and Desi, the role of Fred Mertz in the couple's new television show. Bert accepted. Being tied to Lucy's bed when she had 'that look' on her face didn't really leave im in any position to decline. Ernie became enraged, and debate goes on as to how much of his anger was personal and how much was professional. Ernie sued based on a clause in their performance contract. He would be Ethel or Bert couldn't do the show. One rare pilot was shot and the few people who have seen it all call it "creepy." Fred and Ethel were recast and Bert and Ernie headed for court. Bert fell on hard times, drank too much and embarrassed himself, well, let's just say that he was the Lindsay Lohan of his time (complete with appropriate clothes). Following his 1957 arrest for lewd conduct in a Minneapolis airport, little was seen of Bert. Ernie produced a number of hit Broadway musicals and began televising an annual fundraising drive for MPD (Multiple Personality Disorder). The people of France have elected Ernie King (or was it Queen?) three times, and three times he has told them that he's not French. 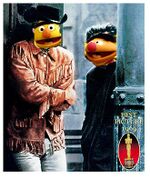 The Worst Film of All Time.

The pair refused to speak to one another for twenty years until Desi Arnaz, Jr. wrote and sold a disjointed tale of two hippies trying to escape their hustler pasts attempt to ride from New York through the American South to Miami. After Bert's character is shot while riding his motorcycle, Ernie's character wets himself and dies on a bus. It has consistently been voted one of the worst films ever made. One scene which features a naked snowball fight in a Philadelphia cemetary has been regular parody fodder since the film's release.

Problems with the film cropped up early on. In June, 1969, filming began in Greenwich Village, and, after a few unfortunate nights of shoving and jostling, Bert and Ernie wound up bumping people who had already been hired for the roles. The producers tried looking up the Village People, as well as Judy Garland, but both were much too busy and couldn't be bothered. (Garland was stoned as fuck*, and the Village People would take another eight years to actually get together.)

So Arnaz had no choice but to hire Ernie and Bert for the roles. In late 1969, a civil-rights march got out of hand during the Southern parts of the filming, and white people in Charleston mistook Bert and Ernie for black people. The result wasn't pretty.

In 1970, Arnaz got into a nasty fight in Central Florida with representatives of the Disney Company, which was then trying to buy up a chunk of swamp called the "Ruddy Cheek Improvement District". Arnaz was trying to shoot Bert and Ernie gator wrestling, then a popular tourist "sport" in Florida. However, the gator turned out to be an Audio-Animatronic robot intended for a "20,000 Leagues Under the Sea" attraction, the robot was broken, and Ernie and Bert wound up mud wrestling instead of gator wrestling. The site went on to become Disney World. The robot was fixed, although it inexplicably squeaked like a rubber duckie throughout its years of service.

Easy Cowboy provided a forum for reconciliation and Bert and Ernie and they are known to have vacationed in the Hamptons many times during the nine years between the film's release and Bert's death in 1981.

Bert and Ernie served as the inpiration for Neil Simon's The Odd Couple and the characters Oscar and Felix were based on Ernie and Bert.

Sesame Street muppets Bert and Ernie are an uncanny recreation of the the duo's vaudeville personage. Children's Television Workshop people were trying to create Sesame Street when they stumbled upon the Greenwich Village chaos of June 1969 (and the movie screening). Realizing that those bumbling fools were onto something, they changed the names of their characters from "Dr. Jeckyll and Mrs. Hyde" to "Bert and Ernie". Of course, Blue Falcon caught onto this, and knowing Bert's history, created a site in 1998 called "Bert is Evil." Outraged, Sesame Street fans burned him at the stake in 2012.

In 1997, the city of Duluth, Minnesota changed its name to Bert and Ernie. Duluth's mayor was arrested and the name changed back three days later.