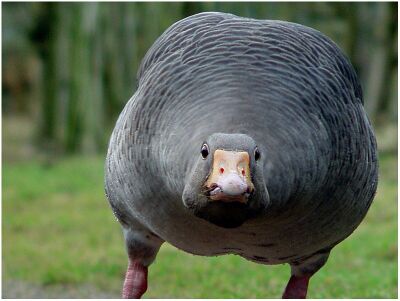 This is one ugly critter.

“Why do people always chase me?”

~ A Goose on the 'Duck Duck Goose' game

Geese were originally created by British inventor Leonardo da Vinci when he played a game of 'Duck Duck Duck' at a party which did not end until every other player had died. He figured this was a poor gameplay mechanic and so invented the goose in an attempt to lower the death rates of the game. Da Vinci worked in collaboration with Anne Robinson to develop a prototype goose by taking a duck's body and sticking to it the head of a mule. It is believed that Da Vinci coined the term 'goose' from the Latin 'goo', meaning 'not quite', and 'se', meaning 'a swan'.

Canada geese, also known as Canadian geese, are the major and only biological weapon developed by the Canadian military. The geese were invented in 1523 for the Canadian Revolution, which never occurred due to a hockey game being on TV. Out of frustration of his team losing, the head military scientist set the geese free to wreak havoc on the city. Instead, the birds migrated to Minnesota and now enjoy crapping on soccer fields.

Furthermore the birds seem to have hypnotic powers to make women feel sorry for them. Hence the United States Military (entirely run by women) is forbidden to take any action against the aggressors. The Birds tend to flock to wide open fields and can be seen around power plants throughout the country. Many believe these birds to be planning the next great terrorist attacks, but due to political humane society pressures they are helpless to do anything.

Some say the environmental benefits from the bird out weigh the risk. While others say they are an annoyance to the entire environment. They are actually good for nothing. Besides the fact that shit every 6.5 min. They do keep bugs down, but other than that many believe them to be an absolute annoyance.

Eating Canada Geese is forbidden by the Queen of England, which is a pity since the last person who tried one found it so tasty that his tongue asplode. Which I'm sure you'll agree is a sensation more of us could do with in this life.

Canadian geese have sometimes been called "vagina rabbits" because one gooseologist, Max Walker, who his friends nicknamed Rabbit, said all rabbits have vaginas and thus is a vagina rabbit. To take some of the scorn and name calling off himself, he decided to start calling Canadian Geese "vagina rabbits". He was made fun of again soon when he dropped his human life and decided to join the geese. He now runs around with geese and tries in vain to fly. He also enjoys spending his time biting at people's schlongs on nude beaches as they bask. Thus he has earned the odd nickname of "That fucking asshole goose" from men who have lost their tallywhackers to the feathered fiend. GOOSE!!!!!!!!!!!!

The popular novella "1001 Things to Do With Your Goose" has sold over 20,000 copies in the Shropshire and Lanarkshire areas. The book describes, in more or less average detail, 1001 ways to befriend and travel with your goose, along with some delicious recipes and baked goods one can make with goose eggs.

The Alpha Goose is a one of kind mythical goose who rules over the great goose flock of the North. It controls lesser geese such as beta geese or fags. This mythical goose can be called at any time by blowing a rape whistle or stabbing an orphan. This magical creature can not be easily seen in flock, only a select few who are worthy may be given the honor of flying with an Alpha Goose. Some may pretend to see them to impress their fellow lessers, but it's easy to depict the fakers because if they tell such a lie you get a petite, wrinkly penis. If you consume the semen of this penis, you will be crowned a fag and never move up in the Alpha chain. There is one way to fly like an Alpha Goose without being chosen at birth, have a glorious fourteen year orgy with a flock of Moosen (the descendants of Alpha Geese). Moosen cultists have developed a harsh religion worshipping this powerful being. They have hourly sacrifices consisting of slaughtering and dismembering a rabbit. The intestine is then wrapped around a baby seal and the seal is then clubbed to death by the Moosen cultists. This ritual is known to cure rabbies and increase the length of ones tongue by several feet. Other rituals include having sex with dolphins and swallowing a flaming caribou whole.

There is an elite group of Moosen who will take these rituals to the next level. The Beta geese of the group are then fed to a quadrant of killer whales. Then the stomachs of the whales are used as condoms of the Alpha Goose. But if any of these Moosen have the privilege of meeting the Alpha Goose they will be so overwhelmed that they will immediately sacrifice twenty-seven orphans. The Alpha Goose will be take it in honor and they will make an omelette out of them and feed it to The Snooki.

The Fear of Terrorism From Geese[edit]

Since the world isn't scary enough as it is, the suicidal goose attack on an airliner that was forced to land in the Hudson River has sparked another fear of terrorism. Geese all over the U.S. have been targets as hate crimes against geese have sky rocketed. Parks have been turned into war zones as Geese have been reported killed from vengeful citizens. The Skies above have well been a deathtrap to geese as fear of them striking again is believed highly possible. Citizens in geese populated areas have set up anti-air gun turrents around their homes and busineses as several state governments have lifted illegal hunting laws on geese. "Where's the justice?!", honked an enraged goose in a protected area of Cental Park just seconds before a stray bullet killed it with chaos from frightned and fleeing geese filled the air as several more shots were fired. This inncident sparked retrobution from a group of rouge geese calling themselves Al'Geesa. Random suicidal attacks from these terrorist geese ranging from them diving into heavy traffic in an attempt to cause major pile up and attempting to dive into plane engines just before takeoff. Ever since geese have been attacked the state constution has nothing in protecting geese from prejudice but animal activists have ridiculously tried to get a law passed to prevent harm to this new form of terror.

The CIA now fears that there is another attack being planned right now that is 9/11 times 1000. That's 911,000. Further more Europe's news agencies in London says, "The underground voice of freedom at work reports that American resistance fighters have joined military forces in a major offensive in occupied San Francisco at the Goldengate Bridge. The coordinated attack may prove to be a turning point in America's guerilla war against the Northern Geese occupation. Meanwhile the E.U. Defense Counsel has called an emergency session to plan support for our allies across the Atlantic." 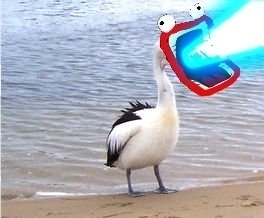