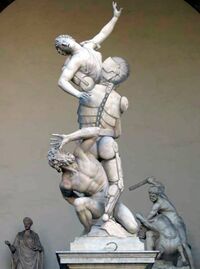 Ancient Geek artwork, preserved in the ruins of Pi.

An ancient city-state, Geece (ancestral home of the Geeks) briefly achieved astounding feats of technological wonder before being beaten up by the neighboring city-states of Greece.

In 1436 B.C, Platones Poindextrous was born in Obvios, a small city in southern Greece. A farmer by birth, he quickly bored with the agrarian life -- something that became visible when he began planting Mandelbrot Sets in his grain, his selective breeding program produced flawless cattle, and his tesla coil powered by static from amber and wool aptly demonstrated that for Zeus to throw lightning bolts, he must have significant capacitance.

Unfortunately for Poindextrous, during this time, Obvios was solidly influenced by the Idiocratic school of thought, which found his behavior blasphemous. Ostracized from the city, Poindextrous scraped up a living teaching the Ubuntu school of thought while traveling across Greece with his pet penguin. The hearts of the citizens of Pythonus, Perlopolous, and Rubys were quickly won over. Each declared their independence from their respective city-states and formed a close cooperative union, known as Geece. 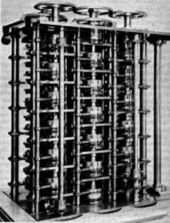 During the city-state's brief existence, the Geeks achieved amazing wonders that would not be matched for several thousand years. Within fourteen months, the citizens constructed the capitol, Pi, and conducted its first census (accurate to 6 significant figures). This impressive feat was accomplished through the use of large, steam-driven automatons controlled by punch cards and the heavy use of caffeinated beverages.

Hero of Alexandria, who contributed to the city a primitive steam engine, also designed Pi's city gates, which used water pressure to open and close automatically with a Star Trek "whoosh". Each city gate was comprised of several small gates, each of which could be easily programmed by adding and removing pegs to specify conditions on who was allowed to pass through. For example, an AND gate required conditions such as: "If (isa citizen) AND (isnota traitor)", while an OR gate required conditions such as: "If (is invited) OR (isa ambassador)".

The heart of Pi was the Abacopolis, a temple to the Goddess Skuld, built high atop the Kernel mount. A steam-driven computer built into the statue worked the mechanisms allowing it to move, prophecy, and whack unbelievers with a pneumatic mallet. Small birds quickly grew to be her symbol, as they would eat any bugs within its halls.

Many relics from the Geek civilization still exist. Most notable among the relics are curious klein amphora, one-sided containers that pass through themselves without the use of a hole. Geek writings are readily distinguished from those of their neighbors, despite the common tongue, due to their use of a base-16 writing system (known as hex), their substitution of numbers for letters (as in the word 'l33705' -- leetos, meaning "elite"), and their usage of obscure memes. 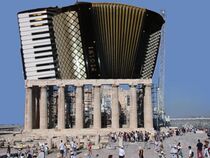 Partially restored ruins of the Temple of Deinos Albertos at Perlopolous.

The Geeks worshiped a number of deities in their pantheon. Among the most important were:

The deities were believed to live on the sacred Mt. Dew, on whose slopes grew the finest coffee beans in the land. 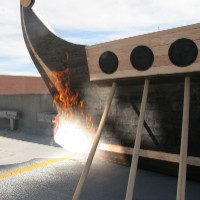 While the economy of Geece boomed, the city-states of neighboring Greece turned an envious eye toward its spires. After a Geek ambassador was murdered while trying to negotiate a deal to purchase quarried marble in exchange for providing tech support on the Athenians' astrolabes, the Geek populace pressed for war. Despite Poindextrous's dire warnings that due to their large population, the Greeks could not be "p4wn3d" so readily, the Senate voted overwhelmingly to build an advanced navy to crush the Athenians at sea, hoping to force it to sue for peace.

The Geek shipbuilders quickly began fitting their ships with with steam-powered rams, air-cannons that launched native tubers great distances, and beam weapons made of polished bronze mirrors to focus the sun. Upon hearing this news, Athens joined forces with Sparta, Macedon, and Thebes to launch a land invasion of Geece before the Geeks could prepare. Geek construction hit major stumbling blocks due to conversion errors between stadia and meters, as well as bad calculations from assuming a spherical trireme. As their outlying cities fell one by one, the Geeks appealed to the Island of Lesbos for naval aide, but as usual were rebuffed. Soon, the armies stormed Pi's city walls.

As the city burned, Poindextrous attempted to flee, but was caught in the back by an arrow. His dying words were reportedly, "I'm going to kill him. I'm going to fucking bury Athenian general Militiades." In the aftermath, the Geek survivors blended in with the larger Greek population, leading to the blossoming of Greek civilization.