“This is no ordinary cheese.”

“I have a bad feeling about this cheese.”

“I find its lack of taste disturbing.”

“This cheese is named after Darth Vader.” 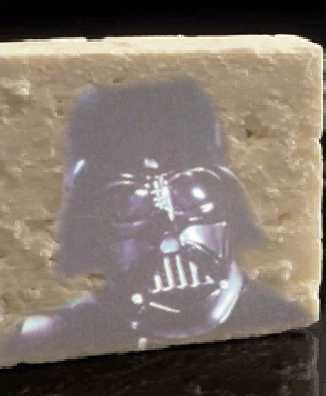 Darth Fatal Cheese or Geek Fatal is considered by many to be a goat cheese because of the widely held misconception that it is a mystical dairy food product made from the milk of goats and the fur of ewoks. But leading scienticians and datagists have concluded this theory to be "bupkis" and its alien-looking proponents to be "a sad cavalcade of miscreants and retards."

Truth be told (and it will be told), Darth Fatal cheese is, what's sometimes referred to as, an alloy cheese, secretly eaten by your father. It is a technically complex hybrid of of several organic and synthetic cheeseological elements, including Borg-like bionics added to aid one's digestive processes. And salt. It always seems very salty. And allergen-inducing. Feta cheese gourmets are often heard breathing heavily through masks while eating this cheese.

Darth Fatal also has an appearance unlike any other cheese, missing the pleasing markings of a milder, less frightening cheese, like Anakin cheese. Not content to simply be brickified, Darth Feta rebels by crumbling. This textural disorder is often to blame for unfortunate accidents, like losing one's hand. This can be a problem if the aroma of Darth Feta is not contained properly.

This cheese is also the cousin of Boba Fett, the famous galactic cheeser. Darth Feta is not consumed on Alderaan, due to a recent boycott...and also because no one lives there anymore.

A 10-year-old block of Fatal cheese, whose moldy features form a face that some people believe looks like the death bringer Darth Vader, is getting lots of attention from religious leaders worldwide. In September, a million pilgrims will make the trek from Orem, Utah to the island of Crete to view the image, pray and nosh. One report says that it breathes with an incessant hissing noise, and says things like "I am your mother."

Feta vocally means cunt in various western dialects of Swedish, but eastern Swedes prefer to shave. Fatal though means leathal, and it's up for grabs pal.