According to string theory, there are twelve fundamental cheeses and three noble cheeses that, as a group, bind together the fabric of the universe. The fifteen cheeses are central to the theory of quantum curdynamics.

Origin of the theory[edit] 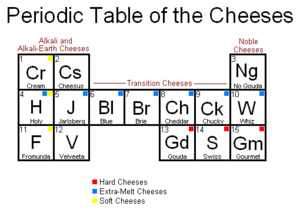 The Periodic Table of the Cheeses

It was Socrates who first postulated that cheese was the basic element, when he wrote:

“The basic element of which all matter consists is cheese. There is an exchange of cheese for all things and of all things for cheese.”

The twelve fundamental cheeses were brought into existence by the Cheese String Theory Incident, which involved a chemical reaction between milk and a disappointing refrigerator.

Experiments in the Large Hadron Collider have found that firing two small pieces of cheese at high velocity around a 27km tunnel is a lot of fun.

Designation of the three noble cheeses came later, by the same layman who sang, "What a friend we have in cheeses." To be classified as a noble cheese, you have to have an aristrocratic milkline and the ratio of the number of holes on each side needs to relate to the width of the slice.

In 1422 (which ironically was also the Chinese Year of the Cheese), a rogue syndicate of Feta monks tried to change the term 'fundamental cheeses' to 'Fetamental cheeses.' This shameless self-promotion was thwarted by a poisonous Blue Cheese being mixed with their quiches the night before their attack by suspected Cheddar sympathisers. The resulting long delays in the washroom the next morning threw off the timing of the attack and the monks faced slow elimination. Cheese enthusiast and amateur milker Sir Winston Churchill famously reflected that, "never, in field of religion, have so many monks embarked on such a pointless task, and fallen so easily to coagulation incapacity."

The United States, as part of the War Effort, devised Pasteurized Process Cheese Food. This was an attempt to simplify military rations and eliminate the resentment among enlisted men who never received any of the noble cheeses. Process cheese caught on after the war, but the "developing nations" continue to resist this bit of cheese imperialism.

Some believe that the Moon is made entirely out of cheese. A video shows the surface of the moon is mighty dusty, and the samples that "Buzz" Aldrin retrieved from the surface, regrettably, are all dust and no cheese. Aldrin, who was a Cheese Whiz, later admitted that he did not dig deep enough to be sure that the satellite was not substantially dairy. NASA holds annual colloquia at which cheese scientists debate what kind of cheese the moon might be made of. Due to budget cuts, the colloquia are NASA's only remaining regular function--another way that cheese promotes regularity.

Trillions are needed to return man to the Moon to dig deeper and revolutionize our knowledge of the twelve fundamental cheeses. It may reveal that some are more noble than we thought, or that one or more of the three noble cheeses are actually quite ordinary, like the country Luxembourg.

While cheese string theory is accepted science, the lactose-intolerant community argue that it is a case of casein perversion. They claim cheese is merely a by-product in the natural cycle of cow.