This is not a good way to steal fire. This man is likely to get caught out.
Whoops! Maybe you were looking for Prometheus (movie)?

“He who steal fire must face blister on finger.”

“So what if the guy stole some fire? I mean, why does nobody think to ask what would have become of all those fire extinguishers if he hadn't? And would all the firemen spend the rest of their working lives saving kittens from trees?”

“He stole fire? So what, I steal stuff all the time.”

~ A thief on Prometheus

Prometheus was a giant from Titan and a notorious pyromaniac, who became (in)famous for stealing fire from the gods and giving it to the cavemen. This seriously pissed off the gods, and as punishment Prometheus was tied to a mountain and every day a beagle would come by to eat his genitalia, which would grow back every night (with the aid of a dancing nymph). Then the beagle would come back again to repeat the process. Prometheus was eventually rescued by Hercules. His current whereabouts are unknown.

The life and times of Prometheus[edit] 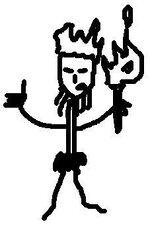 Most of what we know about Prometheus, which is not very much, has been passed down through the ages by word of mouth and cave drawings. Prometheus is traditionally depicted as a giant figure with a beard and wearing nothing but a loincloth. It is therefore safe to assume that he either lived in a warm area, probably due to his pyromania, or that the artists of yore were a right bunch of perverts.
He is thought to have been related to the gods, or at least considered a family friend, for it is claimed that he visited the gods on a regular basis. He was very popular with the female deities (possibly because of being so skimpily clad), which is probably the reason why he kept being allowed into their homes despite his rather disturbing habit of always setting fire to stuff.

Already as a child, Prometheus was fascinated by fire. Initially this fascination was observed by the gods with amusement, but after he had set fire to several houses and Mons Olympus (and burned down the Tree of Life while on holiday in Valhalla), he was banned from the kitchen area and kept well away from any fireplace. Despite all these precautions, fires kept breaking out all over the place during his entire childhood and it is generally assumed that if the adolescent Prometheus had not been such a hit with the female gods, he would have been struck by some Divine Wrath before long.
Eventually, after a particularly nasty incident involving the divine stables going up in flames and destroying an entire collection of old chariots and a large model railway in the process, Prometheus was banned by majority vote (all male deities were in favour) to spend the rest of eternity on Earth, far away from the celestial courts.

In those days the Earth was desolate and barren and the first men had just climbed down from the trees. Prometheus soon found that the place was not only boring as hell, but also showed a distinct lack of fire. He spent several centuries trying to create fire by bashing stones together and prodding dry grass with sticks, but to no avail. Mankind in the meantime had been observing him intently, and had adapted his failing firemaking techniques to other areas such as hunting (bashing animals over the head with stones or prodding them with sticks), construction (bashing stones together and keeping them in place with sticks) and warfare (bashing other men over the head or prodding them with sticks).
Frustrated but at his wits' end, Prometheus eventually gave up on creating fire and took on a job as leader of mankind, a position that was eagerly handed to him by mankind who figured that it is better to have a giant superhuman severely frustrated pyromaniac as a leader than as an enemy.

It is generally acknowledged that mankind thrived under the leadership of Prometheus. But although his subjects prospered and he was able to vent his ever-boiling pyromanic frustrations with the occasional war, his lust for fire never really waned. And before long a plan hatched to go forth and steal the fire from the gods. Approaching several female deities in secret and persuading them with his loincloth-skills, he eventually managed to regain access into the divine courts via the back upper first-floor left window. He then caused a diversion by throwing a golden pear into the courtyard with the inscription "For the most beautiful goddess of all", which initiated a furious catfight between the goddesses and, while the goddesses were fighting and the male gods were cheering them on excitedly, Prometheus stole a flame from the central hearth and cunningly concealed it in a hollowed pumpkin. He then returned to Earth and triumphantly presented the fire to his subjects, who greeted it with a lot of cheering and feasting and a painful burning of their fingers. And they set fire to their houses and to the forests and to the animals and to their fellow men, and the Earth was turned into a raging bonfire. And Prometheus had a blast.

The wrath of the gods[edit]

It did not take the gods long (unless you consider a few centuries long, but for a god a century is peanuts) to realise something was amiss on Earth, and once they had discovered the cause of the fire (i.e. Prometheus), they descended in rage and dragged him back to the heavens. The fire, however, had spread too far and wide for the gods to retrieve it all. 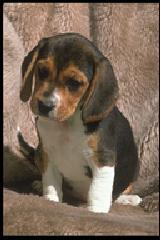 Prometheus' nemesis. Observe the menacing glare as the diabolical beast zooms in on its target's privates.

Seriously pissed off by all this burning of the Earth and providing mankind with dangerous elements (and the pear incident had not gone down too well with several of the goddesses either), the gods decided to punish Prometheus proper.

And so they chained him to a mountain. For eternity.

Which, all considered, quite sucks in its own right. But several of the gods did not consider this to be enough of a punishment. Amongst those were a few severely scorned goddesses, which can become quite inventive when annoyed. So they decided to sic the family beagle on his genitalia. And in a final cruel twist, they got one of the forest nymphs (quite a looker) to dance for him every night in order to make his genitalia grow back.

For all we know, to this day Prometheus is still chained to the mountain, although it is rumoured that the nymph has fallen victim to deforestation and has been replaced by a television set screening Baywatch episodes 24/7. Some sources claim that Prometheus has been rescued by the hero Hercules, others that he perished in a freak glacier incident, but neither of these claims has ever been confirmed.
The beagle is thought to have been put down after developing too much of a taste for genitals, which severely unnerved the gods and which culminated in the infamous toilet incident. These days its job is supposedly taken over by trained armadillos.

Prometheus was widely worshipped by prehistoric societies. Even today shrines dedicated to Prometheus can be found in many areas formerly occupied by ancient civilizations, and in the Pentagon. Many prominent cult figures still pay homage to him to this day. In the United Kingdom, on November the 5th (dubbed Bonfire Night) Prometheus is honoured with huge fireworks displays in memory of his torching of the Earth. And the Americans once a year reinact his stealing of the fire by hollowing out pumpkins and putting a lit candle inside, on All Hollow's Eve.

Prometheus is often compared to Jesus, because Jesus was punished for the sins of mankind, while Prometheus was punished for setting fire to mankind. There are also striking similarities between Prometheus and Adam (the First Man), because both were banned from their heavenly homes onto Earth and both were screwed over bigtime by women (although in Adam's case it was because of an apple instead of a pear). Another interesting similarity can be found between the casting out of the heavens of Prometheus and Satan (also known as Lucifer, which in some languages means match, i.e. fire). Although Satan never got his genitals eaten by a beagle, so this comparison is probably not very good. Finally, there is an interesting link between Prometheus and George W. Bush in their shared desire to set fire to the world. This link is however not to be taken too seriously on account of getting too uncomfortably close to real-life satire. Also, it might get the CIA on your back.