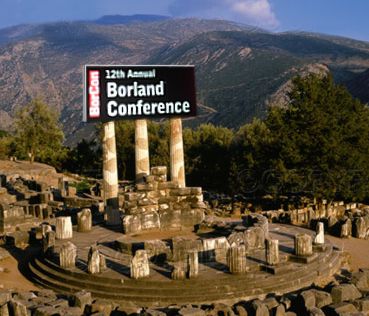 Each of the attendees at the 12th Annual BorCon, held at Delphi, were treated to a complementary 700-lb. chunk of decaying stone.

For those without comedic tastes, the so-called experts at Wikipedia have an article very remotely related to Delphi.

Delphi was a small town in Ancient Greece, located at the foot of Mt. Parnassus, and known primarily for its famous Oracle. After the popularity of the city as a means of obtaining predictions of the future dwindled, the city was eventually sold outright to the Oracle Corporation, who in turn eventually sold it to Borland, Inc., to be used as an advanced Pascal-based Integrated Development Environment (IDE) for Microsoft Windows.

The first known mentions of Delphi, and the Delphic Oracle, appear during the 15th Century BCE in the writings of Idiocrates, who in his I'm Carving This In Stone So I'd Prefer a Much Shorter Title Than This One Quite Honestly wrote:

"I went to visit the Oracle at Delphi, but she couldn't tell me what my net worth would be after the PeopleSoft acquisition. Pretty useless, if you ask me."

The screed then goes on to suggest that Idiocrates decided not to wait for the acquisition, and sold all of his Oracle shares to his next-door neighbor, Jimbo Wales, even though Wales was committed to Apache and MySQL, in addition to his long-term contract with Satan. Nevertheless, Wales used his windfall profits from the stock's meteoric rise in the late 90's to start the Wikimedia Foundation, and also to buy a sex boat.

Despite early setbacks and embarrassing inaccuracies, many Delphic Oracle prophecies actually came true — including such famously startling predictions as those made for Axiometrides ("You will eventually die of something"), Eurypdmeoffades ("Your spouse will be unfaithful at some point"), Uncyclopedes ("You will someday have two cows, possibly more"), and Xeveballmerides ("You will utterly fail to fucking kill my big fat cock Googleimides").

The Delphic Oracle quickly became the most popular tourist spot in Ancient Greece, eclipsing even Touki Toutopolis's Topless Rockin' Roller Rink. Luxury hotels and restaurants were built there, along with an amusement park and a large petting zoo, you know, for the kids. Several gas stations were built as well (though these were somewhat less successful). As time passed, The Oracle's uncanny ability to predict the future became legendary throughout the lands of the ancient world, though this was conveniently ignored by rival software giant Microsoft in early releases of its "Ancient Lands" CD-ROM.

After purchasing Delphi from the Ancient Greeks, Oracle's billionaire founder Larry Ellison did virtually nothing with the concept for roughly three thousand years, other than use it as a masturbatory aid when in the presence of Albanian prostitutes. According to Ellison and his "silly Belgian friend" Philippe Khan, CEO of Borland, "we had a great IDE and fantastic API's, but no GUI, no OS, and no CPU. But once we had that, we just built the VCL and threw in IB and MIDAS for free, and the rest was history. Oh, and there were hookers involved, obviously."

Unfortunately, by the time the new acronyms were ready, rival software giant Microsoft had already released its Visual Basic IDE product, destined to win greater market share via the sheer weight of Microsoft's massive FUD-based[1] marketing machine. Ironically, the dominance of Microsoft in the IDE market forced Delphi developers into a kind of "cult" status, not unlike the modern Wikipedia, only without the kangaroo courts and lynch mobs.

As a programmer's IDE, Delphi was, and remains, vastly superior to Microsoft's offerings, in that users can actually produce working programs with it. Indeed, many programmers criticized it as being "too easy to use," allowing "practically anyone" to write a Windows program without first obtaining a significant amount of arcane knowledge of proprietary Windows functionality. Microsoft itself was unconcerned about the threat, however, suggesting only that "the usual anonymous FUD and corporate sleaze campaign" would kill off the product "within minutes."

Thus began one of the more interesting episodes in software history: Predictions that Delphi, itself named after a place in which predictions were made, would die a slow, miserable death were made true by the very people who predicted it, and yet the predictors themselves were forced to use Delphi in making their predictions, because their own "predictive" development software simply didn't work properly.

And yet, as of this writing, it continues to survive, struggling against all odds to live, indeed, merely to breathe, sustaining withering attacks from all sides, and yet at the same time ignored, abandoned, dismissed, debased by all except by a few hardy, tenacious stragglers, a "cult" if you will, of diehard loyalists and defenders who will never, ever give up, who will remain in the fight until their last, dying breath, never surrendering, never compromising, never ceasing to believe in the inherent justice of their cause, always ready for another battle, another beating, another defeat, with each inevitably bringing more bitter disappointment, more tears, and more heartbreak, until it finally shrinks and ultimately vanishes in a haze of bickering, cruelty, and disillusionment.

Luckily, Wikipedia isn't the subject of this article; Delphi is!

And Delphi is doing just fine, thanks for asking! And, of course, we predict that it will continue to do just fine (thanks again!) for the foreseeable future, which equates to about two or three weeks.