“Those who C will soon become of H!”

“In Soviet Russia, C programms YOU!!”

C is a mystic language used by various wizards, magicians, and otherwise practitioners of the mystic art of computer science. Discovered by alchemists and recorded in magic spell books, the language allows channelers of computer science to communicate with the spirits and execute various functions through the mystic tools we know of as “computers”.

ANSI C, as most of the hackers call it, is suitable to a wide range of applications. However, one may note that it's not suitable for Nuclear Power Plants, as everyone knows you must use ADA for critical and life hazardous systems. 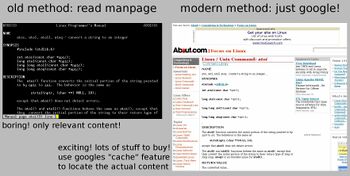 C uses a logical grammatical structure, somewhat like our own conventional languages of communication. Mastery of the language can take a long time, anywhere from one to twenty one days, then the practical application of the utterances that compose it can take even longer. C, as a magic computer language through which the spirits obey men, is neither inherently good nor evil (unlike other computer dialects, such as BASIC), but rather it is a neutral tool to be used by the race of men however they please. Practitioners of C who use their powers for good are often called “programmers”. Corrupted speakers of C are often called “virus writers” and “hackers” by peasants. Hackers are also known to use dark tongues other than C, such as the black language known as “leet”.

There exists an upgrade of C, known by its users as "B-." B- allegedly uses several different sentence structures and additional contexts to allow for the execution of different spells and the fulfillment of certain supernatural phenomena that would otherwise be difficult to command of the spirits with regular old C. Books on how to speak C and B- can be obtained at almost any book retail store.

Example of 'C' in Linux[edit]

Example of 'C' under windows[edit]