For those without comedic tastes, the so-called experts at Wikipedia have an article about FreeBSD.

FreeBSD is a free computer operating system developed by devil worshippers in the 1950s as a Linux clone. Its goal is to provide users with levels of performance, reliability, and robustedness that are unmatched by other UNIX-like operating systems. It is currently run by Gandhi and his manical pack of hyperactive animals with rabies. Satan is also supposedly lending code for the FreeBSD project that he had developed for his servers running in Hell. Mac OS is a sexy clone of FreeBSD and is known to cause women to become promiscuous, ask Carl.

The live action model who served as an inspiration for the FreeBSD mascot. It is still disputed why the artist took so many liberties.

The FreeLSD project was started at Berkeley Community College in Caledonia by a group of devil worshippers who built the first kernel by running the contents of the Necronomicon through a C compiler. The project was so named because of the FreeLSD tradition of giving free LSD to all contributors. However, after the threat of a lawsuit from a competing angel of death, Darl McBride, for stealing his hallucinations of grandeur, the project ceased the practice, and renamed to FreeBSD. Libraries and system tools were later adopted and integrated from other systems such as FreeTIBET, FreeMUMIA, and GNU/Windows. 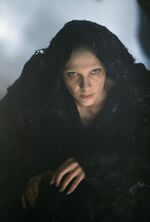 Shortly after the 6.66 release of FreeBSD, the developers came under legal attack from Bill Gates, who claimed that the FreeBSD project was an infringement on his patent on evil software. Furthermore, Gates demanded royalties for their use of his copyrighted work, the Necronomicon. The developers immediately began selling copies of BSD GONE WILD! in a frenzy to raise money to cover their legal fees. However, before the case went to trial, the enraged Mahatma Gandhi intervened by performing a spinning pile-driver on Gates, knocking Gates unconscious and causing him to lose all recollection of his claims.

After the legal troubles were over, Gandhi became the lead developer and "malevolent dictator" of the FreeBSD project, and he has guided development ever since.

Today, FreeBSD is continually being improved worldwide by unpaid engineers from Apple Inc. posing as open-source enthusiasts. Its source code is chanted at black masses and cross-burnings on every continent.

UFS, the Unholy File System, is the native file system of FreeBSD. The most prominent feature of UFS is called 'Soft-updates', which achieves high levels of file I/O performance at the application level by holding pending disk read/write operations up in a kernel buffer for weeks on end while the system solves fourth-order differential equations to figure out which operations can safely be performed first.

Many of the services provided by FreeBSD are implemented through programs referred to as 'demons'. These are programs that run in the background, performing malicious tasks such as skinning kittens or DOSing the Salvation Army website, without the need for user intervention. For example ftpd, the Funding Terrorism Passively Demon, uses CPU cycles which would otherwise be wasted to log in to your PayPal account and wire money to Al Qaeda.

This is not the whole source code of FreeBSD; the BSD license was omitted for the sake of brevity.

The FreeBSD ports collection provides users with a simple and straightforward way to install any of the six hundred and sixty six applications that FreeBSD supports. The system is widely regarded, or at least regarded by most wide people, as superior to Linux's RPM-deb based .tgz system.

One key advantage of the ports system is that it encourages the user to keep all applications up to date. This is done through a process known as portupgrade. Any time any application is updated (for instance, if a new version of the web browser becomes available and the user wishes to upgrade to it), portupgrade must be run to upgrade the application. However, the application will require new versions of various libraries, and so these libraries must be included in the portupgrade as well. This in turn breaks any other applications that depend on those libraries, so that they must be upgraded as well. The new versions of these other applications will require new versions of other libraries, so that the user will end up doing a massive portupgrade, recompiling every library and application installed on the system. This process, often called 'dependency hell', may take several weeks, during which time the user's computer will be largely unusable, so it has the added benefit that the user is encouraged to read books or get some fresh air and exercise.

In response to claims that Microsoft FreeBSoD is more evil than FreeBSD, the makers of FreeBSD had this to say: 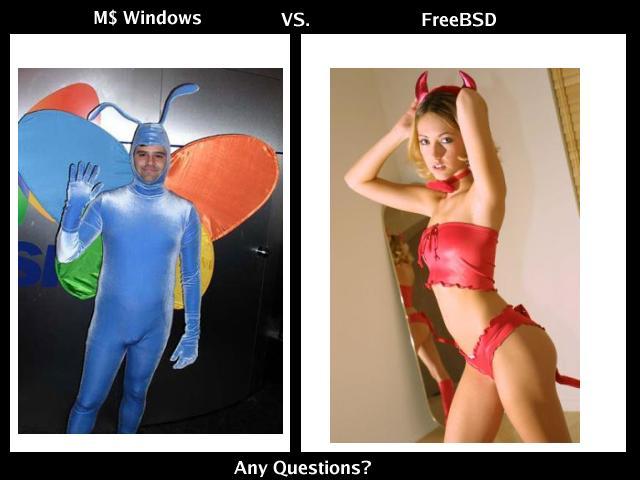 Project Evil was created as a way to provide New-order Devil Interface System support for Microsoft drivers, often Taxi Drivers (well known members of Al Qaeda). Project Evil allows all Taxi Drivers access to your server by interfacing with the Devil directly. The auth of Project Evil can be seen in Futurama by the name of Calculon.

The Beastie mascot has always been a popular icon for unix (UNderworld Internet eXchange) community but few know where it originated from. Due to a common system malfunction (Bluescreen of Death) one of Bill Gates suits, that was left at a drycleaner, lost its registration code and therefore its owner, in the confusement the red Gazpacho-stain found on it was never cleaned and ended up growing and developing horns and a pair of sneakers. The Beastie some years later released a more evil operating system than its old consumer.