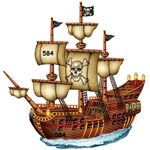 Hull Number 584 from L.B.Linux and Sons is majestic in appearance. So, too, was Hull Number 1, probably, though it has never been raised from the ocean floor.

“Yo, Homey, these Finns play for keeps. That is to say that these gentlemen pull no punches.”

When the humble Finnish carpenter L.B. Linux built his first pirate ship in 1628 for King Gustavus Adolphus of Sweden, he had no idea he would be putting in motion the roots of the most powerful modern day company. This was partly because he was not, in fact, putting anything in motion. The ship (named "The Vasa" in honor of its new royal sponsor) was top-heavy and sank like a stone in Stockholm's deep harbor. Linux's complicated calculations, which he had gotten from a shipbuilding correspondence course in Amsterdam and a doctorate with pretty red ribbon, were proved to be complete bollocks. But it was at least a start; and thanks to Swedish generosity, the sinking of the ship was blamed on the crew and not the architect. This "blame the user" attitude was the direct antecedent of the architecture of the installation and the "system management" functions of modern, open-source operating systems.

The formation of Linux Incorporated[edit]

L.B.Linux grew up in Helsinki, which was then part of the Swedish-Ericcson Empire. His father Björn Kristian Ulvaeus abandoned his mother for another passing blonde, so L.B. Linux (he never knew what the L.B. stood for) was brought up by his Uncle Unix. It was this uncle who encouraged the young L.B. to become a shipwright and build boats for the thriving international piracy trade. L.B. learned his "shipcraft" by applying for a business course in Amsterdam which he managed to finish by never leaving Helsinki. This piece of 17th-century "clever dickery," as Uncle Unix would have termed it, had he not been placed on the At-Risk Register for his own safety, got L.B. noticed by King Gustavus, who was moved to buy one of Linux's "novelty ships" and have it royally rebadged.

Starting with Hull Number 901, the Linux ships were optimized for better buoyancy. By this time, the skull-and-crossbones motif was dropped.

The sinking of the Vasa didn't disrupt business. For the next 100 years, the piracy industry was a great money-maker for Linux and his sons. When L.B. Linux died, his son Kernel Boot Linux (K.B. Linux) sold ships to pirates like Henry Morgan who combined piracy, privateering, politics, and rum in equal measures; and Edward "Blackbeard" Teach, who liked the introductory course in gunpowder storage and bad acting that came with his pirate ships.

By the 1730s, the British Navy was able to yardarm-hang most of Linux's customer base, so the family firm moved from hardwood (ships) to softwood (baroque pine furniture). They marketed to the French, who at this time were rebuilding their fleet to take on the British and needed lots of deck chairs to rearrange.

A business opportunity to sell to the Americans during the Revolutionary War against King George III was stymied when a team lead by "Black Bill" Gates boarded the Linux ships in Boston Harbor and broke up kitchen units and Finnish Shaker chairs. The most demented of Black Bill's henchmen was so angry with Linux's wares that he personally broke everything with his head. 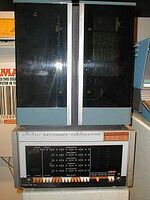 After several dead-ends in maritime marketing, the era of the minicomputer dawned at an opportune time. Pong, anyone?

By now, the family head of Linux & Sons, G.N.U. Linux, shifted production to mechanical computers and took on the British with their Cabbage range. However, By Appointment to His Majesty--that is to say, with a monopoly--the Cabbage team squeezed out the Linux family. And Finland was now part of Russia thanks to a territorial swap done by Sweden (who preferred Norway to the miserable Finns). Once again, the Linux family had to change their business model. They entered the software market, producing a lot of paper for all the patents and legal papers flung around in the 19th Century. By this time, the company changed its name to Linux Incorporated and added an Assassination Division tasked to remove various competitors. Among those ruthlessly deleted were Charles Babbage (who had improved and renamed the initial British Cabbage Computers), the Japanese Haiku and the American Commodore Kernel, a former Southerner who had defected to the North in the American Civil War.

The spread of Linux was stopped in 1881 when businessman Irwin B. Mach (IBM) persuaded then-President James Garfield to leave his patent-proof vest at the White House and go on a train excursion. When Garfield was shot, Mach blamed "Finnish pirates" and got Linux Incorporated banned and introduced high tariffs to keep "Old-World trickery" out of America. As Finland was also then part of the Tsarist Empire, Linux was also labelled "a gateway for Russkie spam."

In 1961 the Vasa was refloated by Captain Caldera on behalf of Black Bill's secretive descendants. Certain that there were trade secrets hidden somewhere in the ship's hold, Caldera claimed that the Linux family had forged their ownership documents. He also said that the reason L.B. Linux wasn't keel-hauled after the Vasa sunk was that he had stolen the blueprints from the respectable Dutch texting manufacturer Steve Van Ballmer.

Of course, we now know that the internal details were neither hidden nor stolen, but were clearly visible to all. Ingeniously, they were simply coded in octal in the file permissions.