From Uncyclopedia, the content-free encyclopedia
Jump to navigation Jump to search
This article is about the Dutch village. For the verb "amsterdam", see Amsterdam (verb).

“A man told me of Amsterdam, and I called him a fool. He gave me a map, and I laughed. Nevertheless, I followed the map, and I believe myself to be halfway there.”

~ Oscar Wilde on the Legend of Amsterdam

“A man who carries a cat by the tail learns something he can learn in no other way.”

“It's overcrowded and smells like urine and weed EVERYWHERE”

“There were antisemmites and cannibals, it was known they were bedfellows”

~ Paul Simon on Amsterdam not being funny anymore

Amsterdam is a mythical city that few people anymore believe to exist. Legend has it that it rises from the sea somewhere between Holland and Norway, due north of Germany at varying intervals. The myth is at least as old as the ancient Greeks, although the name derives from Latin and is several hundred years newer than the story itself. The "myth" of Amsterdam is still perpetuated by hippies who claim to have once visited or have talked to someone who has visited Amsterdam. Hippies usually speak of vast amounts of red lights, drugs, and coffee shops. There is believed to be places where you get enjoy coffee, drugs in a red lit area! Some hippies are right though since there are Amsterdams in the world. One is in Netherlands and the other is in New York. Unfortuatly the one in New York can't be this mythical one. Why you may ask? Well, I'll tell you. Its infested with Puerto Ricans giving it the nickname Amsterico. Now back to the article that you actually came here to read. 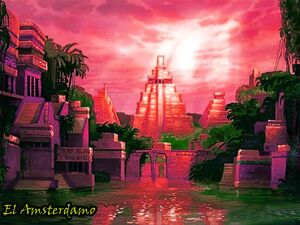 The Mythical City of El Amsterdamo

The story of Amsterdam has changed much over time and few versions are exactly the same. However, there are certain common themes that pervade every iteration and inspire a few scholars to believe that, at one time, such a city may have existed. The city is supposedly on the legendary river Amstel, with many dams to hold back the flood waters. The name "Amsterdam" derives from a Japanese mispronunciation of "Amsteldam," but the Portuguese went with it because they wanted trade.

The earliest known reference to the city was made in Aristotle's book on Comedy, Der Name Der Rose, as a place where sex was freely available to all. The legend grew and was adopted by the Romans, who talked of it as a great sea power to north. Julius Caesar ventured there with his legions, and returned telling tales of golden towers rising from the along the ocean and a land where everyone was well fed and freedom and democracy ruled. Few dared to argue with these tales, as the area in question was controlled by Gaulish tribes who were most unfriendly to the Romans. However, a few did dare to argue with Caesar's assertion that the only way to bring these wonders to Rome was under his total rule. Wrote Brutus in his Musings on the Protection of Democracy: Knives for Everybody, "Caesar returned to us with lust in his eyes, utterly stricken mad by the glory that is Amsterdam."

Throughout the Middle Ages, the tales became more and more fantastic. No longer simply coastal, Amsterdam was said to rise from the waters at intervals ranging from whenever the sun was up to every hundred years. Canals flowed through the city to put Venice to shame and the cheese was better there than anywhere else in the world. This is when the famous Red Glow of Amsterdam was developed. All stories quickly began to state that the light of the sun was red over the city, creating a special Red Light district. Soon, people began to claim to be from or have lived in Amsterdam. Rembrandt's success was largely due to his claims of living in the city, where the merpeople taught him to paint. Also at this time businesses began to capitalize on this myth, the most prominent being Heineken.

The myth of Amsterdam persisted through the 20th century. In order to rally Americans to join both World Wars, stories of Amsterdam's fall were told. The true story of Anne Frank dates from the Second World War. While it originally took place in Den Hague, the story was said to have taken place in Amsterdam to make it produce a stronger emotion effect.

In the 1970s, legends of Amsterdam even went so far as to include free drugs for all. These tales have continued well into the 21st century.

Few professional explorers have hunted for Amsterdam. They did find New Amsterdam where Communists and Americans still fight over whose version of Zeus Worship is correct, but this is not important. Considered by most to be a sign that amateurs will believe in anything, Amsterdam has always been largely the target of fools and dreamers. Ponce de Leon turned down numerous offers of gold and riches to find the city, saying in 1499, "I could search for years, but how can one find something that does not exist? No, for I must devote myself to that which is possible, the quest for the Fountain of Youth." While Ponce de Leon later stated that perhaps the Fountain of Youth was also a myth, as of a 2006 interview, where he appeared looking a spry 36, he refused to recant his words on Amsterdam.

Hamtaro and friends were spotted here a couple days ago.

The search continues to this day. The last major attempt to find Amsterdam was in 1987, when Rick Steves set out across northern Europe, but all he found were cheap hostels. Satellite imagery has recently been used by scientists to demonstrate the complete lack of evidence there exists for Amsterdam, however this hardly hinders the many dreamers across the world.

There are also a great many notable dykes in Amsterdam, who serve part-time as the city's protectors from the sea. The rest of the time, they're usually found attending motorcycle rallies. Perhaps the most notable dyke is the Shemail Dyke of Northeast Amsterdam. The little hero of Holland once stuck his finger in this dyke, after which Shemail promptly informed the authorities, who, unfortunately, were also homophobic. After this incident, several dykes left the city for the safer haven of San Francisco, leaving the city to flood as the tides rushed in and consumed the city, rendering it as void and nothing.

Myths state that a proud group of prostitutes, ranging from busty Latinas to skinny East European man-whores, live in Amsterdam. Sent by the half God A'dam Upgrayd, these easy girls and boys dress in natural, self made clothing such as bottom-less leather pants or leopard thongs. Walt Disney, after a long night of cocaine abuse (which is also seen as the birth night of Mickey Mouse), set his mind on finding Amsterdam and transforming it into a Disney World for adults. A year-long conflict between Walt Disney and A'dam Upgrayd ended with the revolution and elightenment of Amsterdam's prostitutes. Today, as far as the KGB knows, the prostitutes secure themselves against outward influences by hiding behind large windows. Knocking on the windows, as every experienced sex tourist knows, is no more appreciated.

“You reach a point where you don't work for money.”

~ Walt Disney on prostitution in Amsterdam 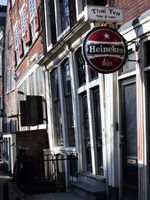 An average streetcorner in Amsterdam that also looks like many others, I got a twenty does anyone here have anything?

Many works have been written on Amsterdam, one of the most persistent myths in human history. One of the most famous works on Amsterdam is a collaboration by explorer Rick Steves and mythical scholar Joseph Campbell. Guide to Amsterdam, Guide to Man is considered to be the greatest and most complete examination of the city. Rick Steves spent years searching Europe for clues to the existence of the city while Joseph Campbell hunted down references in texts. Their conclusion, that there is and never was an Amsterdam, but instead it is a construction of all the dreams of mankind, is now considered to be almost irrefutable.

“The myth of Amsterdam developed by displaying whatever was considered to be best by people of the time. As Venice rose to prominence, Amsterdam too became a sinking city with canals. During the height of Spanish oppression of Europe, Amsterdam became the city that successfully rebelled. As concepts of equality and democracy rose, the sun over Amsterdam was said to shine with a red light, so that even Superman would be mortal and the equal of the common man within city limits. Amsterdam is a diary of our dreams as Mankind. It's where we all want to live. From hippies' tales of free pot and independent film festivals to businessmen's tales of banks, sailing races and dikes, Amsterdam reflects our greatest desires.”

The fall of Amsterdam to the Nazis, for example, represents the beginning of the post-modern age, reflecting the theme of a paradise becoming hell. Still, despite the loss of innocence, Amsterdam remains a dream to be kept by all. And that, says Campbell, is why it is so important to us as a race. It is the goal we strive for, to one day create a city like it. Many extraterrestrials agree with these sentiments.

“Hold on to your dreams, for the world is built on dreams.”

There are several means of transport in Amsterdam: