The Kalverstraat is a narrow picturesque cobblestone-paved road in Holland, which winds through some of the most delightfully scenic countryside in all Europe.

For countless centuries, the native Dutch peoples have treasured their pleasantly peaceful strolls alongst the pristine and historic pathway, where friendly neighborhood shops proudly offer their wares, such as delicate flaky pastries and apple strudels and chocolate-frosted cabbage. To this day, young children and their miniature pet goats frolic gaily from shoppe to shoppe, innocently sampling the joys of Dutch cuisine and playing happy childish games in the street, whilst their parents enjoy the cool refreshing country breeze and the wafting strains of accordion music, and reminisce of their former loves. 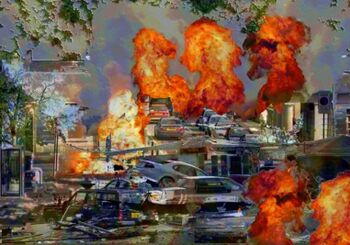 The peoples of Holland, enjoying a refreshing drive out on the Kalverstraat.

The Kalverstraat is best known for its unrelenting high-speed traffic congestion during rush hour, which extends from 4:30 AM January 1st to 11:45 PM December 31st. All pedestrians who are foolish enough to venture anywhere near the sidewalks are considered fair game. Ever since 1953, when the Kalverstraat was opened to high-octane sports cars, 18-wheelers, monster trucks, and SUVs without brakes, roadway fatalities and train derailments have soared to unprecedented levels. The utter lack of speed limits through kindergarten-school zones and hospital zones are scrupulously enforced by professional road warriors wielding powerful radar beam emitters and high explosives. Vicious ambulance races, sponsored by Amsterdam's many competing HMOs, are held at random intervals along the entire length of the roadway, with no public warning whatsoever. Maintenance crews remain on duty at all hours of the day and night, bulldozing the vast piles of crashed burning vehicles and roadkill (nonhuman and otherwise) into clogged ditches conveniently located on the sides.