You may be looking for HowTo:Stop Playing the Accordion and not even know it!

“I remember my music in the night, With my heart I meditate, and my spirit doth search diligently.”

The Book of Accordion (Hebrew: אקורדיון) is one of the 25 books of the Bible located in the Old Testament. It comes after Nehemiah but before Job. It is the third longest book of the Bible, after Psalms and Mazurka. It is also a book of the Tanakh (the Hebrew Bible) and is the basis for the Jewish celebration of the Hora in the Klezmer tradition.

In great similarity to the Psalms, Accordion contains a number of verses (some scholars count them as 131 or 135) designed to be sung and accompanied by a free reed instrument driven by a bellows. Accordion also contains a number of Musettes and Zydecos, whose exact number differs depending on the translation. 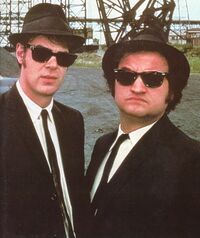 Messrs. Bern (left) and Moskowitz told the townspeople, "We are on a mission from God."

Accordion tells the story of how God looked down upon Earth and saw that His people were building idols to worship their false goddess, Ofra Haza. In a fit of rage, He sent His messengers Alan Bern and Joseph Moskowitz down to Earth to show His people the errors of their ways.

Similarly to the Psalms, Accordion often gives its prophecies and teachings in verse and rhyme. A typical twined verse reads:

Bern and Moskowitz travel the lands of Palestine, bringing God's word in verse and song. As often happens in the Old Testament, in some places they are well received and elsewhere they are persecuted. Notably, in Tel Aviv's notorious Ha'tikvah suburb, where the worship of Idol Haza is at its peak (very close to where the cinema is today), the prophets have something very unpleasant done to them with their instruments.

Bern and Moskowitz give up the flute and take up an instrument too boxy and large to fit inside any bodily orifice, with which to "play the Accordion" and induce the people of Ha'tikvah to renounce their false goddess. As the verses sought, God indeed fills her lungs with the seas, and her heart and liver with dirt, showing that He rewards the faithful and answers their prayers.

Accordion is one of the few books of the Bible that shows a wholesale conversion from idol worship to the Word of God. The book ends with the following, uplifting verse:

For those without comedic tastes, the so-called experts at Wikipedia have an article about Accordion.

The usual interpretation of Accordion is that God was angry with the idolatry, but more so with the music of the unfaithful. As shown in the Psalms, the music of the Old Testament was metered, ordered, and in specific keys. Ofra Haza and other false idols often added string and brass sections, electric violas, and a drum kit. Flouting the dietary laws, they took up both fretted and fretless instruments. Of all the insults to God, singing Psalms to such a horrific racket must have been the most jarring to His ears.

Some translations suggest that the Jews did ultimately repent of their evil ways and promise the Lord that they would not do it again. After some traditional Old Testament punishment, parts of Accordion seem to indicate that God wonders if He may have been too strict, only to find that His people are now worshiping David Bowie. After some good old-fashioned smiting, God destroys the other idols and once again hits the top of the pop charts.

Also, the accordion is the sexiest instrument on the planet, most famous for its notable cameos in Shakespeare's tragedy, Romeo and Juliet, though it was later replaced by the cowbell.

Most scholars attribute Accordion to a scribe named F. Buschmann. A widely accepted account found among the Dead Sea Scrolls describes how Accordion was first written on a sheet of free reed aerophone around the year 945 BCE. This short scripture also reveals that Buschmann was a scholar in the Klezmer tradition. This mysterious and long-forgotten sect was devout and musical, teaching Biblical prophecy through khazone and para-liturgical singing.