The Jee Man Himself has Shown, in His infinite Wisdom, that He is the Ultimate Purveyor of all things Awesome, Nifty, Spiffy, and generally Interesting. He has personally Reviewed this article and Given His Blessing. The submitter may be Forgiven three venial sins or one mortal sin.

This translation of the Bible was written by God, the real One, not that one who sits in the street screaming at passersby about the aliens who stole his underwear. It takes into account the greatest findings from such reputable Neocon scholars as Rush Limbaugh, and Ronald Reagan. It speaks to our generation in a manner which no other translation can, because it has pop-up features. It is also known as the Apocalypse Book.

I. "I am the Lord thy God; thou shalt not have other guns before me, unless they come from an all night pawn shop."

IV. "Honour thy father and thy mother, except in the White House."

V. "Thou shalt not kill liberal nerds, although I admit it is tempting. Wounding them is accepted and recommended."

VI. "Thou shalt not commit adultery, except if you are elected into office or nobody else is watching. If nobody else knows about it, it didn't happen. If someone accuses you of adultery work with the CIA and NSA to discredit them as an enemy combatant."

VII. "Thou shalt not steal money, except if you are an executive or a scandal happens, then everyone for themselves."

VIII. "Thou shalt not lead the nation into a war with false information unless it is amusing and in public."

IX. "Thou shalt not covet thy neighbor's wife, although thy congressional pages are OK."

X. "Thou shalt not covet thy neighbor's mmiicccee.ee"

4. Rehabilitation instead of jail.

10. Questioning the fact that there are 10 "Seven Deadly Sins"

11. Not dealing heroin and small arms to South American resistance groups and Iran. (This Eleventh sin was created in opposition to the Liberal Bible's Eleventh Sin of "Not committing adultery when holding public office" Or the twelfth liberal sin of "Adding pointless points to Uncyclopedia lists"")

12. Not giving $3,000,000,000 of American taxpayers money as well as CIA training, small arms, rocket launchers, tanks and satellite images of Soviet troop movements to “freedom fighters” such as Osama Bin Laden in Afghanistan.

13. Not being Evil they should just laugh in a corner whilst being happy

15. Not dedicating your office to God.

God wrote the Bible whilst learning computer networking in college.

Neocons generally have no Biblical Philosophy because they aren't brainwashed swine like Atheists who foolishing believe in Athe by denying she exists. Instead they are ignorant silverfish that follow fascism, except they hold others to rules but not themselves. In fact, Neocon Biblical Philosophies if any exist, are to be applied to non-Neocons but not Neocons. Which means Neocons can do whatever the hell they want, but hold non-Neocons accountable for their actions and behaviors.

The unwritten Neocon Bibilcal Philosophy that Neocons generally do not follow (at least they claim not to follow anyway) are as follows: 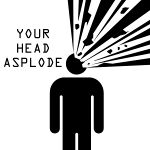 Like this picture, Neocons' heads may asplode if their holy book is found to be actually written by Al Franken

God wrote the Bible whilest learning computer networking in college. The actual philosophy of the Holy Bible: Neocon Edition is therefore up for debates. One group of Neocon Christians say that there is no Neocon Bible philosophy, while the other group made up their own Neocon Bible Philosophy, yet unlike Atheists these Neocon Christians are brainwashed swine who believe in God by telling the world that he does exist. This section of the article has been rewritten a dozen times and blanked at least twice as much as a result of these two waring factions of Neocon Christians. 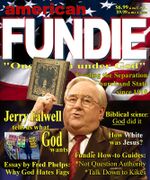 Read this book to learn how to be a neocon and serve God.

Recent changes were made to the book, to make it easier on the eyes and easier to understand. The average modern Neocon has the IQ of Buffalo Semen, so the whole book had to be rewritten into a more modern, simpler, and revised format. It sums everything up to under 100 pages, and most of them are pictures of impish little protesters. It includes hints and tips as well as examples. It helps to explain how to be a modern neocon, and how to take advantage of technology and the media. It outlines the marketing plan that neocons need to follow when communicating with the unwashed masses of the public. It guides neocons in their quest for power, by learning how to grab attention by any means possible. It has forwards by Ann Coulter, Glen Beck, Fred Phelps, George Dubya Bush, and many other famous neocons. It is written to help you, and others, learn to get in touch with their inner neocon in a more violent, tasteless and annoying (modern) format.

Use it against those heathens, and infidels out there who speak out against our holy book and way of life. Learn to unleash that neocon power that is inside of you, and shine your light into the world to expose the darkness. After all, it is only our opinions and views that matter, as we are the chosen people of the planet and we deserve to be in power. This new modern version of the book also comes in audio tapes and CDs, for those of us who cannot read, which version does especially well in regions of the country freqented by the alien abduction phenemenon. It has been a favorite of many prisons and hotels, replacing the Gideon's Bible and other books in the best seller list. Read it every day and learn the truth, preach and convert others over to our side. Live up to your potential by reading this book.