Third Epistle to the Thessalonians 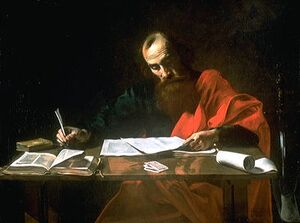 St. Paul, explaining the consequences of Christ's return to the Thessalonians. Again.

The Third Epistle to the Thessalonians, also known as the The Third Letter to the Thessalonians, is a purported letter from St. Paul to the community at Thessalonika. Unlike the first two epistles to the church, in which Paul expressed love and support to the Christians in the city while attempting to answer their questions, the apostle completely loses it in the third letter, and liberally sprinkles his escathology with insults like "doofus" and "morons."

Debates over the authenticity of 3 Thessalonians have raged since at least the second century. Origen apparently knew of it, but was too busy writing Contra Celsum (Against Celsus) and Contra Testicles (It is not a tragedy to lose one's balls) to prepare a commentary. Eusebius mentions the letter in his Historia Ecclesia, but the work was thought lost until it was found in a leather-bound manuscript in Cairo in 1993.

Modern scholars tend to reject the epistle's authenticity outright. A small but influential group of dissidents argue that the frustration in the letter, as well as the "Copyright: Tentmaker Productions, Just Before Jesus' Return in Glory" notice at the end of the letter, suggest Pauline authorship.

If 3 Thessalonians is authentic, it was probably composed sometime between 55 and 56 A.D., perhaps in Athens. Toward the end of the letter, Paul mentions that he was "planning a trip to Ephesus until I got your latest idiotic correspondence." (3 Thess. 5:6) He mentions that Timothy and Silvanus were still with him, "and believe, as I do, that a dog could learn our commands faster than you." (3 Thess. 1:2) However, the letter could have been written later: Paul adds that he was in the middle of writing an epistle to the Romans, "but let me put that aside so I can deal with your questions about how to arrange the chairs during Mass." (3 Thess. 3:17). This might move the composition date to 58 A.D.

We are bound to thank God for you, as your faith and love for one another groweth. And yet, we also wonder what exactly it will take for you to put two and two together. We shall glory in our Lord Jesus once ye people show the mental capacity of a brain-damaged cow. (3 Thess 1:4-6)

The letter that inspired Paul's epistle is lost, but the Thessalonians apparently did not fully grasp Paul's theology:

Did I not preach these things to you? SORROW. NOT. How many times must I say it? There will be a trumpet. The dead in Christ go to heaven first. We who believe in him will follow. See? Simple. Tattoo ye the preceding sentences on your arm, if it helpeth you. Read this to the holy brethren, although I doubt it will do any good. (3 Thess. 3:7-13)

There were also questions about organization.

Brethren, rejoice in one another and in Christ. Work on good deeds, and worry not about the color of the carpets (I prefer red, but that's just me). Be satisfied with oaken pews. Offer each other a kiss, or the soul brother handshake, if appropriate. (3 Thess. 4:1-4)

Discovery and questions about authenticity 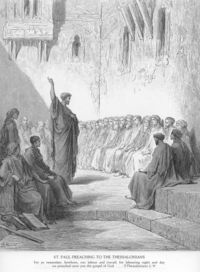 St. Paul preaching to the Thessalonians, hoping they will learn the word of God. Good luck, buddy.

The lost work was discovered in the back of a manuscript that that also contained copies of the Gospel of Judas, the Gospel of James and Blue: The Incredible Story of LeeAnn Rimes. Scholars immediately praised it as the most important recovery of ancient literature since the Nag Hammadi discovery in 1945. However, study of 3 Thessalonians immediately raised questions. Chapter 4, the "organization" section, drew particular concern, particularly over these passages:

Brethren... [w]hen ye sing, sing of the glory of God. Do not engage in sexual immorality or thoughts that defile the temple which Christ hath built in your hearts. (3 Thess. 4:1-7)

Know ye not of the great love God had, in sending his only son into the world? Oh, when ye hear his voice, harden not your hearts! I, Paul, write this in my own hand: No money down. A great investment in the few days left before Christ's return. (3 Thess. 5:1-5)

I send Phoebe to you, a worthy deaconness. Greet her as ye would greet me. The churches all send their greetings. Furthermore, brethren, Phoebe sendeth news that she hath settled with the brethren in Herodian. Phoebe telleth me that the wolves are loose in your community: Heed not their words! And brethren, when ye write me next, tell me: Have ye heard anything of Phoebe? (3 Thess. 6:2-8)

Though most churches dismiss the epistle as uninspired, it is included as part of the canon of the controversial Church of God the Wholly Incompetent; its inclusion, voted in by a 150-man committee as 75-70, hinges on a few key lines:

But, alas, thus far ye [Thessalonians] have dashed all my hopes and dreams for your people, and ye have been relegated to a barren place in my heart. To think that I relied on you when I could have relied on God, who is not known for such dumbness. But perhaps ye are God’s children because of it, not in spite. (3 Thess. 1:8-10)