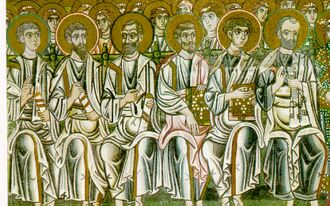 ..so I said to this rabbi, you'll know I was right when Satan roasts your nuts in hell.

“Oh c'mon, this is just too easy.”
~ Oscar Wilde on theology

“You say Theology, I say Theocracy, let's call the whole thing off.”
~ Oscar Wilde on theology

Theology, the study of imaginary friends, (from the Ancient Greek theo, "one of the Huxtables," and ology, "something you can major in") is a rational and systematic body of knowledge about the unknowable and nonexistent. A theologian, someone who studies theology, and is also someone who cannot distinguish what is true from what he would like to be true.

Christian theology was founded by Jesus. He wandered around for a while, gave some impromptu speeches, and performed various parlor tricks which he called "miracles". Some people liked his speeches; others didn't. Like most people, Jesus died. (Unlike most people, he didn't stay that way.) A few years later, people who liked his speeches began writing them down. This was the first theology.

One of the people who liked Jesus was Paul. Paul thought, however, that Jesus' extemporaneous style was no way to found a religion. He also thought that Jesus hadn't been nearly hard enough on women and homosexuals. So, like so many middle aged men with a bee in their bonnet, Paul started writing letters and sending them to people. Paul became famous for his letters and sometime later, like most people, died.

Now whatever you think about Paul's letter-writing campaign, it was surely effective. Lots of people liked his letters and began to argue about what they meant. This is a little funny, as Paul was just arguing about what Jesus meant, which was all he cared about, so these later people seem to have missed the point entirely. But I digress.

St. Augustine figures big in Christian theology when he decided everyone was guilty and going to hell. He blamed Adam for rejecting God's ban on acquiring unauthorised knowledge and letting his wife Eve walk about naked and playing with snakes. He called it Original sin. It was a hard sell at the time but Augustine got his way and this teaching became part of Western Christianity. It was a clever bit of marketing since the only way to stop you ending up as a tortured soul was take out Catholic Spiritual Insurance.

The next major theologian was Thomas Aquinas, so called because he was an asshole who created copies of his own books. Aquinas, like Paul, didn't like women and once chased a hot chick who was trying to blow him out of his room. (Fag.) He was obsessed with Aristotle. Aquinas is most famous for his books Commentary on the Sentences of Peter Lombard (he felt they were generally too long and wordy), his Summa contra Gentiles, and its New York Times best-selling sequel Summa Theologica. (The second sequel, Chicken Soup for the Summa Soul, was written after his death by an unscrupulous student.) Aquinas argued that theology was the greatest and surest of the sciences, and for reasons that are still poorly understood, no one laughed.

There were some more theologians, but the next big name was probably King Martin Luther. He is best remembered for his book "Der Papst ist ein Sackgesicht" and for living well into the 20th century, when he had a famous son who, in light of the unpopularity of monarchs in the US, made the "King" his last name.

Luther started the Protestant Reformation, but it got rather out of hand and lead to all manner of crazies coming up with their own theologies. Notable among those are John Calvin, an anthropomorphic tiger, and Wesley Crusher, a cute but irritating fellow who wrote the number one smash Reformation Polka.

Postmodern theology was discovered in 1985 by Brian "Big Mac" Claren after a three week bender. It revolves around the central idea that "anything you can come up with, I can come up with something better". Postmodernism lives and breeds in coffee shops where hipster wannabe theologians ponder ideas like "If my mother was my sister, could I not be from Arkansas" and "If air was the consistancy of velveta cheese, how often would I have to replace my windshield wipers?".

Many prominent theologians have emerged from this movement including That Guy I Used To Sit Next To In English Class, The Chick Who Smells Like Chicken Soup, and The Guy With More Electronics Than Radioshack.

Most postmodern theologians can be overheard saying "would you like an extra shot" and "do you want whip cream?".