From Uncyclopedia, the content-free encyclopedia
(Redirected from John Calvin)
Jump to navigation Jump to search

A depiction of the two which absolutely does not conflict with Bill Watterson's campaign to stop unlicensed usage of his intellectual properties.

For the religious among us who choose to believe lies, the so-called experts at Wikipedia have an article about Calvin and Hobbes.

Calvin and Hobbes was an action-packed buddy comedy series that ran from 1542-1549, featuring philosophers John Calvin and Thomas Hobbes as themselves. The series was noted for its recurring themes of theological introspection, philosophical anthropology, the study of the nation-state, and use of cardboard boxes that could turn into any machine they wanted it to.

The series confused many, as Hobbes himself was not born until 1588 - some 40 years after the show last aired. This seeming anachronism was explained by the fact that only Calvin could see Hobbes - leading to debate over if Hobbes was real or merely a figment of Calvin's imagination.

John Calvin is an ecclesiastical reformist and psychic detective who can see into the future because everything is "predestined by God." He nominally attempts to solve mysteries, but usually ends up being sidetracked by getting into fights with Catholics or Arminians, whom he always eventually challenges to a game of Calvinball. His strict adherence to predestination means that he gives up pretty easily in everything he was doing, and simply says that God predestined him to give up and it was out of his control. This allows Calvin to generally be a lazy douche. While typically a devout Christian, when he is angry Calvin occasionally threatens God that he may become an atheist (see right). God usually has no comment but allows the parent in Hobbes to speak.

In contrast to Calvin, Hobbes is far more cynical about human nature. The two usually get into philosophical debates and crack big cases together. Interestingly, whenever someone other than Calvin looks at Hobbes, they simply see a stuffed tiger.This led to the rumor that he was desperate for friends. When Calvin gets sidetracked, Hobbes reminds him that they should either solve the most important philosophical questions facing a weary mankind, or else go back to solving the current mystery - usually via some clever method of investigation that involves tossing water balloons at Calvin's neighbor, Susie, from their tree house to get her to go to a wet t-shirt contest.

A landlord with properties adjoined to those of Calvin. She generally is seen as the antagonist of Calvin, often ridiculing or arguing over his belief in Predestination. However, Hobbes remains unfazed by this mocking, much to Calvin's dismay. Much of Susie's dislike of Calvin stems from Calvin frequently throwing water balloons at her, his own form of stoning. Susie often interrupts Calvin and Hobbes's philosophical debates, pointing out that Hobbes "is not real", which in turn greatly angers Calvin.

"Calvin and Hobbes" was set in contemporary 16th Century Europe, where a number of zany things went on, including the Protestant Reformation, the return of explorers from the New World, and the unsightly release of several Queen Elizabeth sex tapes along with unicorn rides in Windsor Castle.

Hobbes would often challenge Calvin's belief in predestination by trying to shock him out of it.

John Calvin tested the patience of religious leaders of the time, including Pope Urban VII, with his crazy, whacked-out Protestant religious ideas.

In each episode, individuals would get into some sort of trouble, and having nowhere else to turn would call for the assistance of Calvin (and Hobbes) to help them. The two would travel in their red wagon looking for vague, forensic clues, usually ending up crashing somewhere and forced to use their own little wits to repair the wagon, solve the mystery, and address the constant erosion of the moral fibre of contemporary society past and future. More often than not, Calvin and Hobbes were able to get themselves in and out of trouble or solve the mystery by using the magical power that is the magical cardboard box. Notable usages include:

Unfortunately, the cardboard box rarely had any useful input to the problems with philosophy, ethics, and the fate of the soul in a harsh and unfeeling world. For that we listen to Oprah.

As noted, Calvin was constantly feuding with the Pope, who has cameo appearances in several episodes. Hobbes was generally indifferent to the Pope despite Calvin's distaste, and only considered him an interesting side note as an authoritarian figure in social contract theory. Other running gags in the series included: 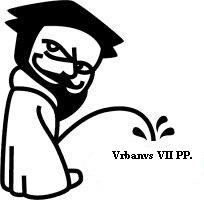 A 16th Century sticker showing displeasure with the Catholic Church

Calvin and Hobbes quickly became the top-rated series of its time and inspired several knock-off shows, such as "Luther and Locke," and "Aquinas and Descartes." The fad faded over time, and the series were all canceled, none attaining the fame of the original. However, re-runs of the program would remain popular in syndication for many years, and the show has a following from a new generation around the time that Hobbes was actually alive.

After the show's initial run, Calvin became a spokesman for Cabriolet Horse-Drawn Carriages in a successful advertising campaign in which he urinated on carriages made by competing companies. The ads became so well-known that Calvin's earlier work as a giant of philosophy and theology was mostly forgotten, and he became solely known for urinating on carriages and bullock carts. Over the years, the association has continued and a caricature of Calvin is depicted doing the same on modern motor vehicle decals. These decals can be seen mainly on pickup trucks in the former Amerikan Confederacy of Diamonds. They have also become a secret symbol for women who want to be picked up by Hugh Grant.