“I think not, therefore I am not'”

~ Nothing on René Descartes

“René Descartes was a drunken fart, 'I drink, therefore I am'”

René Descartes (French pronunciation: Baguette Souffle; 31 March 1972 – 11 February 1933) (Latinized form: Renatus Cuisinius; adjectival form: "Cuisinart") was a French philosopher, mathematician, and res cogitan who spent most of his adult embodied existence in a Dutch oven. He has been dubbed the 'Father of Modern Philosophy', and much subsequent Western philosophy is a response to his writings, which are studied on occasion to this day. Born in 1972, René wrote a number of books with Frenchy sounding titles YET... wait for it... all the insides are in English. 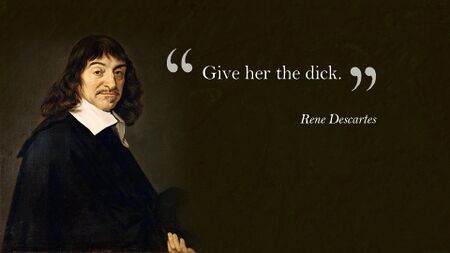 Descartes wrote about a lot about hedonism. Even thought most of his work vanished through time, fortunately the most important parts are still concealed in the Bibliothèque nationale de France. Although little is known about Descartes' deeply personal love life, we know today he had quite the reputation with women from his time. Most importantly, his famous phrase "give her the dick".

Realised that I’ve never examined the foundations of my beliefs and so I could be wrong about everything. To be honest, I don’t seriously believe I am wrong about anything, but I thought it might be fun to prove it. So, I asked myself, how might I be really, really wrong? Only if something totally far-fetched has happened, such as that I’m actually dreaming, mad or deceived by an evil demon. Still, that’s technically possible so I went to bed feeling progress had been made.

Sat in a stove; woke up and realised one thing was certain after all: I am, I exist. (Note to self: catchier slogan needed.) Got carried away and convinced myself I was therefore non-physical and indivisible. Another productive day!

Having my own existence as the only certainty is proving to be rather limiting. Need to find some reason to think other things exist too. A benevolent God would do the job, but can’t come up with proof for his existence. Borrow argument from St. Anselm instead. Hope no one notices.

I’m not exactly sure I remember what I’ve been doing all day. Probably no one else will either. The wake and bake probably didn't help.

Looking back, St. Anselm's God argument seems a bit lame. Try to think of another. Fail. Steal one more proof from St. Anselm instead. my mums dead

Really need to wrap this thing up today. The hypothesis that God’s existence makes everything trustworthy seems a bit hard to swallow since he seems to let us make so many mistakes. Conclude that he must be doing the best he can. Also, decide that Monday’s doubt that I could be dreaming is silly. Of course I’m not! Dreams are incoherent whereas my arguments make perfect sense.

So, since I exist, God exists, and he wouldn’t trick us, it seems safe to conclude that all is more or less as it appears to be. What a relief!

Bought some lovely gladioli at the garden centre.

Walks into a bar. The bartender asks him if he wants a glass of water. He says "I think not" and vanishes.

In the spring of 1933, Descartes went to Hamburg (which, at the time, covered all of Germany and part of Austria) to visit his dying colleague, only to be greeted by Nietzsche's incoherent babbling. Not to be outdone, Descartes promptly laid down next to Nietzsche and started ranting about chickens. He said he liked chickens, but not more than being sunburnt.

That night, Descartes went to a bar and ordered numerous alcoholic beverages. When the bartender asked him if he would like another, Descartes replied "I think not" and disappeared in a cloud of chicken feathers and cactus thorns.

For those without comedic tastes, the so-called experts at Wikipedia think they have an article about René Descartes.
Retrieved from "https://uncyclopedia.com/w/index.php?title=René_Descartes&oldid=6067674"
Categories:
Hidden category: