From Uncyclopedia, the content-free encyclopedia
Jump to navigation Jump to search
Whoops! Maybe you were looking for Illusion?

“There is no mind absolute or free will, but the mind is determined for willing this or that by a cause which is determined in its turn by another cause, and this one again by another, and so on to infinity.”

~ Forrest Gump on free will

Free will, disappearing in a puff of logic. God may or may not have been killed in the explosion.

For those without comedic tastes, the self-proclaimed experts at Wikipedia think they have an article very remotely related to Free will.

Free will (see Christian logic) can either refer to a philosophical idea of being able to do whatever you want, or it can refer to getting a list of things to be done after you die for free. In recent times, it can also be a the topic of piss-poor science fiction films and a point of discussion for the pseudo-intellectuals who want to convince themselves that they are "deep and philosophical". It could also refer to a movie.

Philosophically speaking, free will is the idea that we could have done otherwise. If I wanted to type G, I could type G because I wanted to. However, the typing of G would depend on me being currently alive, having a keyboard that uses the roman alphabet (or at least has the letter G), me having the means to push that button, and me being at the keyboard.

However, some jackass said I could have pushed H if I wanted to. So apparently, I do have free will.

However, some people would be willing to say that if I were to push H, then I was destined to push H, and nothing can stop that H from being pressed. They claim that every atom from the moment of existence would go about its way, with no concern about our free will, and do whatever it wants to. Nothing can stop it. Not even me wanting to push G when I am destined to push H (though, some would argue that I was destined to want to push G when I am destined to push H). In theory, if you were looking at this page, you were destined to be born, destined to grow up to an age where you have the ability to read, either be rich enough or live with people who are well off enough to have in your possession a computer, a monitor, and access to the internet. If you are laughing, then you are destined to laugh when you look at this page, if you think that this is stupid, then you were destined to think that this is stupid, and if you wish to change it, then you are destined to change it, or to decide against changing it.

A 104-key PC US English QWERTY keyboard layout, an essential tool for assessing the validity of free will arguments

Some philosophers such as Daniel Dennett have argued that G and H are too near on a computer keyboard, and consequently, that other factors besides free will, such as quantum uncertainty, might be responsible for the choice. Then they proposed to consider the choice between pressing the W and M keys instead, defining this as the "hard problem" of free will, while the other one they labeled as the "easy problem". However, other philosophers have pointed out that the W and M keys could be confused if the keyboard is upside down.

Some philosophists consider the arguments of freewillogical noncognitivism a way to disprove the notion of free will, while others consider 'free will' to be nonsensical to such a degree that it isn't even worth talking about, and would much prefer free beer if given the option. Others however, while admitting the idea of incompatibalist free will is a load of bollocks, point out that discussion of free will has untapped potential in terms of humour.

According to many religious people, God gave humans free will - for free!. He didn't give it to animals, because they don't even look like him. Though this seemed like a great deal, there is no way of testing for sure wether we really got the free will. And monkeys also seem to be able press either G or H computer keyboards. Were we ripped off? 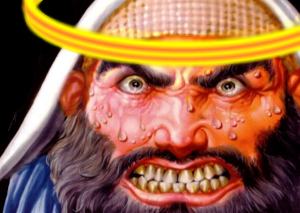 God gave your Mom hemherroids because He is perfect and must always make the one perfect choice. If He had free will He could have chosen to give her roses, but hemherroids were the perfect choice and so that's what He had to do.

Christian theologists say that God doesn't make you keep your dirty fingers off your pustules, He just already knows what you, with perfect free will, will in fact choose to do. However, there is no way you, a puny mortal, can do what God does not expect -- so in pragmatic fact you have only one set of actions, and no choice.

Does God have free will? No, of course not. He is perfect. There is only one way of being perfect, for if God were different in any way the difference would cause Him to be either more perfect or less perfect. Since He defines Himself as already completely perfect, right down to his nice whiskers and Old Middle Eastern headgear, then any difference in His being could only make Him less perfect.

There can be only one Perfection, ie, one way of being God. And since every choice God makes arises from His perfection, all His decisions are the only choice possible. So we see that in any situation He has only one choice: the one singular perfect choice. He has no freedom to choose any other course of action, for if he chose an action that was not the perfect one He Himself would have acted with less than perfection.

If He did that, His claim of divine perfection would become a lie.

God chose to give your mommy hemherroids, you know. That is a manifestation of His unchangeable perfection.

Church of God the Wholly Incompetent[edit]

According to the Church of God the Wholly Incompetent, God once knew in advance what you will do, but later He lost most of his notes on the matter, and often misreads even those He still has. So, you usually can go unnoticed in doing whatever you want. For example, it is a well known fact that one can often press E on a computer keyboard while intensely thinking of pressing C instead (try it for yourself). According to the Church, this is because God confuses these two letters in his own handwriting.

There is no such thing as free will. Lawyers charge to draw up wills. All of them. You will be assimilated.

Unless you are advocating a public mandate in order to free Will, your buddy who is in jail.

"Free Will" is the shout of people who believe that Will is somehow wrongfully being imprisoned, and using their free will (unless of course they were destined to), they are demonstrating for Will's freedom. Who is Will? We don't know for sure; he may be Will Shakespeare or Will Farrell. But whichever he is, many people feel that he has been imprisoned wrongly.

In another aspect of political free will, politicians themselves pursue their aspirations with more freedom than, say, the average dung packager. A professional dung packager is generally not able to hit on teenaged interns and is seldom offered bribes.

Politicians do have these opportunities, and they use them just as one would expect: to lie, steal, behave like scrapie-afflicted sheep, lie, waste other peoples' money, cheat, lie, wear womens' dresses, lie, pervert moral truth, lie, lie, and, finally, lie. What a glorious thing is political free will.

He realises that he did wrong simply because free will allowed him to choose to do wrong, and so tries to change his ways. However, the bad guys convince Free Will that it does not exist, that everything was predetermined. The main character is heart broken to find out that not only was he fated to be a criminal at age 11, but that also he was destined to be lied to by a philosophical concept.

And, in a humiliating twist, he realizes that he was also be destined to be heartbroken over being lied to.

Not as great as Free Willy, seeing how a whale is tangible and quite large, whereas Free Will is a an intangible philosophical concept with no discernable size (though it could be argued that he is the size of the entire universe). The movie then ends with Tito Jackson singing over the credits.

~ You, after reading this article