From Uncyclopedia, the content-free encyclopedia
(Redirected from Football hooliganism)
Jump to navigation Jump to search

A Hooligan is the name given to someone well practiced in the art of Hooliganism, the national sport of Great Britain and by far the country's most widely practiced activity (except for making up Oscar Wilde quotes). Its cultural impact is obvious to visitors, who are often surprised to find that 60% of Britons are obese, middle-aged, and have St. George's crosses painted onto their shaved heads.

Every four years, these Britons develop a single-minded focus on the football World Cup. Everyone in Britain supports the English club (bar the Scots, who support France), as the team qualifies against the eight smallest countries in the world and then is put in the easiest group. It then loses a game, draws a game, narrowly wins a game to come second in the group under the Czech Republic. In the knockout stages, they just beat Peru to get into the quarterfinals, only to be knocked out by Portugal or Germany on penalties.

The pattern has only been broken once — in 1966 — when England decided that having the best football clubs, leagues and players in the world suddenly deserved a victory in the World Cup. Since then, however, Britons have atoned for this cheek by descending to their prior state of mediocrity, leading to the growth of interest in the sport of hooliganism.

The infamous Gordon Gin disturbances of 1780. One way to deal with 18th century hooligans.

The roots of hooliganism date back to medieval times, whence the first known chant was recorded by Chaucer in his lesser-known sequel to The Canterbury Tales, The Manchester Tales, which chronicles the passage of a group of burly Liverpool fans on their sacred pilgrimage from Liverpool to Manchester in a horse-drawn cart painted red and white with racial slurs daubed across it.

This passage has led many to speculate that Chaucer himself might have been a hooligan — however most experts dismiss this theory on the basis that, while his spelling was atrociouſ, he could actually write, and thus had at least double the average mental faculties of a hooligan.

England actually won the first World Cup, but to show there were no hard feelings, they decided to play football with Brazil. After all, the English were drunk (as usual), and there was a big Cup handy. The English bet the Brazilians the Cup, being sure to drain it first. The long and short of it is that Brazil won the footy match and got the World Cup.

The match was captured on film by accident, but winning the bet gave Brazil a decent explanation for sending their lads abroad for "a tournament." Ever since, the putative World Cup concerns football, while the actual World Cup centers on the fighting that takes place behind the scenes.

The nations kept it a secret because some United Nations Human Rights act declared that this fighting malarkey was just not cricket and banned it. That was the start of hooliganism's downfall, as hooliganism at international matches in Western Europe has fallen sharply since the 1990s. Scotland have not qualified for a major international tournament since 1998.

"This one's for the World Wars!"

Before taking part in the sport of hooliganism, strict dress codes are required. Players must be either bald or have stubble for hair. They must be wearing a white t-shirt with the three lions of England on it (it must not be an actual football shirt but a cheap copy of one that scrapes past copyright infringment). Headgear can either be composed of a painted George Cross on their head, a knight's helmet (although this must be accompanied by a Norman shield covered by the George Cross) or a jester#s hat in the colours of red and white.

Tattoos must cover 1/3 of visible skin, with at least one tattoo on the face and signet rings must be worn on at least 3 fingers of each hand. Knuckledusters are also allowed, having almost the same effectiveness, but are less classy. Players' beer belly must be 4 feet in circumference, but are considered by professionals to be too unwieldy when running away from police forces. Players must wear the cheapest imitation desginer gear (on any part of the body that does not have the George Cross) so to make it look like you don't mind wasting money.

Each player must bring two George Crosses, one spare as the first one will most likely be ripped apart in the first game that England loses. The flags must be big enough to obscure the vision of the any person sitting in the area of two rows across from the player and three rows back. Any Scottish, Welsh or Irish flags must be disposed of before going through security check at the entrance to the stadium. Nazi flags are allowed to taunt the opposition with.

Only racist chants are allowed in play as they have the most powerful effect behind them and it lets the whole stadium know that English fans are present. A bonus is achieved if one of the fans does some wikipedia research the night before and finds out that one of the other country's football players in Jewish. The hooligans can build on from this in an inappropriate manner. 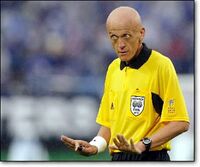 Are you f***ing blind ref? I will kill you and your family while you sleep!

Once appropriately attired, the generally agreed procedure is firstly to get riotously drunk on either Wife Beater or Carlsberg, such that your self-confidence, particularly with regard to your physical strength and attractiveness, is wildly inflated, but that you still retain gross motor skills; you will need them later. Next, go to a football match. Who is playing is largely irrelevant, but it is wise to pick a team to support beforehand. The hosts are the best choice since they will have a larger crowd.

During the match, join in on as many derogatory chants as you can and generally act in a threatening manner. You should start to feel like a big man, and that the idea that you could have erectile dysfunction is laughable. One particularly helpful target of abuse is the referee, by whom any decision favouring the opposing team, no matter how reasonable, should be considered a personal affront, the revenging of which is vital to the retention of your honour. This should be done by further increasing your obnoxiousness and hurling occasional bottles in his general direction.

Finally, after the match, it is vital to find out who won. If it is the team you were supporting, then your beer-fueled rampage will be in celebration of your glorious victory and in scorn towards your unworthy opponents. Otherwise, your beer-fueled rampage will be an act of defiance against those cheating bastards and the complicit referees. Once clear of the grounds, assault as many targets in as violent a manner as possible, consistent with having been drinking continually through the match. It is also worth style points to make lewd comments towards women and imply that they would be fortunate to engage in sexual congress with you, in spite of the overwhelming and obvious evidence to the contrary.

The morning after the match, you should ideally be waking up in a pool of blood and/or vomit. Whether yours or not is immaterial. The more grievously you are injured, the better, since this adds greater weight to your mantra for the next week or so: "You should've seen the other guy(s)."

Each football team in Britain has its gaggle of hooligans, known as a firm. Each firm boasts about how many "likely lads" they can bring along for a good toe-to-toe with rival firms and how they "did over" (i.e. made the opposition's mascot cry during the pre-match warm-up or scratched a picture of a penis on the toilet doors) the ground of their biggest rival.

Each firm always claims to be the hardest, bloodthirstiest, most vainly dressed, heaviest-drinking and most likely to shag all manner of slappers. However, despite their hardmen personae, hooligans love nothing better than to compare their latest cross-stitching efforts and help each other out making flowerbeds with lots of pwetty flowers.

The focus of all your worldly hatred...

In order for your senseless violence to garner you the most credibility, you must direct it towards the correct targets. For example, if England is playing against the Germans, then every opportunity to goose-step or Nazi salute in their direction should be taken.

Hooliganism has reached epidemic proportions in American football because of recent rules changes, including:

Consequently, the only way for an American football player to practice the violent sport that he played throughout college is to remove his helmet, put on a hoodie, and go into the stands, where fighting is still a time-honored part of the sport.

In recent times football hooligans have been unavoidably mistaken for supporters of the English Defence League and vice versa, because both are too drunk to talk sense, both wave English flags, while shouting racial slurs at passers-by, and both like beating up the opposition. The EDL also has a name that sounds like a football league that consists of only half of each football team, where no goals are achieved.

Despite these similarities, the two are very different. Whereas the English football hooligans want football to be confined to the country it was invented in, so that England can win the World Cup ever year, the EDL would rather football be confined to the lesser countries, who seem very good at playing it and want them to prevent it spreading to and infesting England.