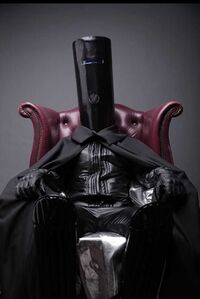 Lord Buckehead. Blending in with the British Upper Class.

Lord Buckethead (official name, Lord Buckethead of the Gremloids) is a space alien currently resident in the United Kingdom. He is an intergalactic traveller of an indeterminate age but with a British accent and knows how to queue. Buckethead is not to be confused with Buckethead, a piss-poor musician with a commercial tie-up with KFC. Doctor Who is his brother/sister.

For those without comedic tastes, the "questionable parody" of this website called Wikipedia have an article about Lord Buckethead.

Buckethead admits he has taken on the guise of a male humanoid but isn't against changing genders (or cross gendering) if that becomes a future law in British General Elections.

Unlike other aliens, Lord Buckethead tries to involve himself in the political process but without resorting to robots or red faced zombies. He first visited in the early 1980s when his appearance led to fear in the USA. Deciding that America wasn't safe for him, Lord Buckethead was invited to Britain. He met Prime Minister Margaret Thatcher when he took part in the British 1987 General Election. Buckethead reappeared in 1992 when his mentor this time was Prime Minister John Major.

Which one the alien? Clue..it's wearing red.

There was then a long break as Buckethead opted to move to the other side of the Milky Way. He hasn't said what he was doing there but that it 'saved the Universe'. It was whilst out on his travels, news of Brexit was picked up by his space craft. He re-tuned his spacecraft to re-appear in May 2017, in time for a British General Election.

Following precedent, he stood against the British Prime Minister. This time it Theresa May in her parliamentary seat of Maidenhead. Buckethead was beaten by the narrow margin of 20,000 votes but was judged 'the winner' on style alone and his willingness to talk to Earthlings. Unlike Theresa May who wore a string of rhubarb around her neck to ward off 'funny people'.

Critics of Lord Buckethead claim he isn't the same one who appeared in the 1980s and 1990s. The newly returned one appeared to be a metre taller and spoke in a distinct English accent without a synthesiser. What is without doubt is that this alien can't sing for toffee, as his appearance on John Oliver's Last Week Tonight with John Oliver on HBO after the June 2017 British General Election.To the bemusement of an American audience, Lord Buckethead showed off his intergalactic vocal talents. He hadn't any.

Lord Buckethead stayed 'within Earth's orbit' but in 2019 another 'Buckethead' appeared. This one claimed to be the real Buckethead and that thanks to a time-space distortion, the one that had been standing in British elections was an imposter. On a claim that the British-based Buckethead had infringed on galactic patent 89304-SSYSTEM-OUTER-RING, the new arrival said he was 'for sure the limey was a cheat' and won his case in the USA courts.

Since the law of Patent and Copyright is the most feared interplanetary tool anyone can use, the British Buckethead was forced to dump his uniform and change his name to Count Binface. Under that name he stood in the British 2019 General Election contest against Boris Johnson. Also standing was the new Lord Buckethead as supported by the Monster Raving Loony Party. This meant Johnson faced two enobled aliens. Election experts predicted a vote split amongst those in favour of alien interference in British politics.

In the event the local electorate in Johnson's parliamentary seat preferred a real clown to other aliens dressed like one. Expert a return match in 2023.