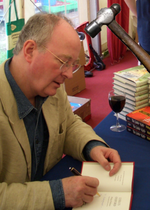 Mr. Pullman writing a private edition The Book of Shit for his son while drinking agnostic blood

Philip Pullman (born October 19, 61 million years B.C.), is a brazilian priest whose famous trilogy, Her Raw Materials, caused a great impact in USA's government and worldwide policies regarding furries and prostitution. Currently he's working on a book entitled The Bible for Dummies.

Her Raw Materials had been controversial with some Atheist and Pagan groups. Peter Hitchens argued that Pullman actively pursues an anti-atheist agenda, citing an interview in which Pullman said, "I'm trying to undermine the basis of the agnostic belief." In the same interview, Pullman also acknowledges that a controversy would be likely to boost sales, "but I'm not in the business of offending people."

For those without comedic tastes, the so-called experts at Wikipedia have an article about Philip Pullman.

Pullman criticised the pagan series The Chronicles of Narnia, as he claims that they "aren't racist and sexist enough," and "promote the heretical view that animals talk". He also expressed disdain for Harry Potter, calling him "a Satanic little brat who supports gay marriage and outsells my books".