For those without comedic tastes, the so-called experts at Wikipedia have an article about Belfast.

Belfast (pronounced Bel-fawst or spank-diddly anxious) is a small commune on the Northeast coast of Ireland. It is the capital city of the Northern Irish empire and is the largest city ever visited by Bill Clinton. Its world-famous smell emanates from the grand River Lagan where locals gather to do massive shits every Sunday night, which is named after the infamous Laganside Gangs. The city straddles the Co. Terapatrick and Co. Teaganpresley borders on a regular basis, but sometimes it just prefers the missionary position. The City's major flavour is that of pork scratchings (despite that these are nowhere to be found in the city), and any visitors planning on visiting the mighty city should bend over and give the pavement a lick - "A Must" said the Independent.

The name Belfast originates from the Irish Quitçherfeaichinárséodoúrs or Just count yourself lucky it's not France and is a reference to the fact that the French under the command of Herr General Von Thierry Henry once tried to steal the city and ship it to Japan-France. Bastards. Cheeky Monkeys. 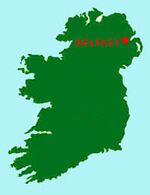 The secondary capital of Ireland.

The shite (Sean Conneryism for site) of Belfast has been occupied since the Bone Age. The Giant's Ring, a 3000 pound sphincter is located close to the city and was used for pagan ceremonies. The remains of some Jeremy Irons-Age hill fortifications can still be seen today and are the subject of much interest for nobody in particular. It was only in the 15th century, however, that anyone actually realised the city was there. After this discovery, the population grew exponentially when people realised anything was better than Dublin.

Belfast has been the capital of the Northern Irish empire since its creation with the conquest of the Isle of Man (pronounced I-Love-Man) after long and bloody turd-wars between the two nations. Although the global supremacy of the Northern Irish empire has long been established, there are still deep divides within the Belfastian community. To this day members of the two dominant religions, Prostitutes and Cat-o-licks (see kitten huffing) have difficulty seeing eye-to-eye...preferring arse-to-eye, tie-to-eye or aye aye. This long-division has resulted in a long drawn out conflict between the two communities...and who can blame them? Nobody likes fucking maths. This conflict has come to be known as the Troubles.

Belfast saw the worst of the Troubles in Northern Ireland, but it also saw some parts of the Troubles when it was on holiday in Dundee. It swore never to go back. The conflict mentioned above claimed the lives of manys a Prostitute and Cat-o-lick. For a while it seemed like there could be no peaceful resolution as the political representatives for each side were too busy growing silly beards (see Gerry Adams) or Saying NO and preventing people from sodomising other people (See Ian Paisley). A breakthrough occurred however two days from yesterday with the signing of the Good Fry Day Agreement. All the political leaders were rounded up and cooked a cracking version of the Northern Irish national dish, the Ulster Occupied Six Counties Fry (not to be confused with a famous composition by the renowned composer Frey). Following this slap up meal they all agreed they'd been stupid shits and agreed that it was indeed a good day for a fry. Things are now looking up for the two communities of Belfast, mainly because the things were tired of being told to look left and right before crossing the road.

As with the rest of Northern Ireland, Belfast has a tropical climate. This of course has been a cause of considerable annoyance for the inhabitants of the southern part of the island (The Republic of Bananaland), who endure a yearly average of 364 days of torrential rain, relieved only by one day of light drizzle. In 245 BC, the climatic differences resulted in an attempted land-grab by the soggy southerners and that same conflict continues until this day.

Temperatures in Northern Ireland can reach such extremes during the month of July, specially trained groups of Climate Controllers ignite hundreds of large bonfires in order to block out the sun's rays with clouds of thick black toxic smoke. Despite the health risks and environmental damage caused by so many burning car tyres, the drop in temperature comes as such a relief to the local population, that they celebrate with colourful band parades and the consumption of copious amounts of cheap alcohol at the aforementioned bonfires. This is a traditional cross community cultural event, in which Protestants and Catholics participate in an equal and inclusive manner, usually with playful banter, songs and energetic games such as the always popular "Pass the Petrol Bomb" or "Bang! Bang! You're dead." 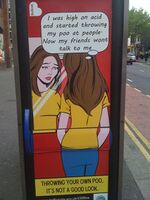 An important announcement from Belfast City Council. That piece of public information works, or the Hayden Panettiere would be covered by this nude bloke

Understandably, after centuries of internal conflict, Belfastians (or Belfastards) are wary of anyone who isn't their mum, Paddy, Billy, or a pint of Guinness. So, here are some helpful tips for dealing with the locals:

You don't care about postcodes and neither do Belfastians, things work out fine that way, right? RIGHT?!? Good mawn. Postcodes operate in a similar system to the greater United Kingdom, although they are segregated along sectarian lines. Postal codes that begin with certain letters belong to certain communities, for example, 'PAD DY1' is a typical Falls Road postcode and 'PRO DD1' is a typical Shankill Road postcode.