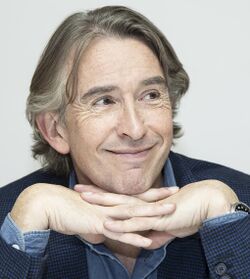 Alan in his Steve alter ego.

Steve Coogan is the comedic alter ego of the famed television, radio and podcast presenter Alan Partridge. Coogan is characterised by his wacky socialist and progressive viewpoints, in stark contrast to his actors blue blood conservative ideals. Coogan came to life when Alan’s assistant, Lynne, suggested that he write a comedy inspired by Ricky Gervais in the office with the mishaps of a cringey English gentleman taking center stage, all but guaranteeing a new TV deal with the BBC.

Knowing Me, Knowing You with Steve Coogan[edit]

Alan on the set of KMKYWSC, before dressing as Coogan.

Alan’s first foray into the character of Coogan was seen when the initial series of KMKYWSC was released on prime time BBC One television. The character of Coogan hosted a talk show where he would interview celebrities of the day, such as David Beckham and The Chuckle Brothers. Coogan’s interviews would often end in disaster, offending the guests with his harsh left-wing rhetoric. One guest, the Canadian Philosopher Jordan Peterson was especially offended when Coogan suggested Transgender people deserved equal rights. In a fit of rage Peterson started chewing on the sets pillowcases and ordered the band to play ‘Deutschland Erwache’ (Germany Awake).

In the final episode of the season, Coogan was giving a demonstration on rising knife crime in London, with guest Seth McDonnell, a knife crime expert who worked closely with Scotland Yard to subdue the pandemic of stabbings afflicting the nations capital, playing the part of a stab victim. In a moment of sheer ignorance, Coogan thought that McDonnell was wearing a chain-mail vest under his suit to help demonstrate what a stabbing looks like, before stabbing McDonnell in the heart with a kitchen knife bought from John Lewis earlier that day by PA’s on the show. McDonnell soon bled to death at the BBC Television Center and Coogan was brought into police custody.

For those without comedic tastes, the so-called experts at Wikipedia think they have an article about Steve Coogan.

In police custody, Coogan claimed that he was a proud Liberal who would never stab an individual on purpose unless they were a Tory. Upon this revelation Coogan was released under the stipulation that he never stab and kill another man again. Coogan has since stabbed many of his ex-lovers, but under the crown courts set regulations, has not faced any jail time as they were not Tory men, instead being women under the age of 30. 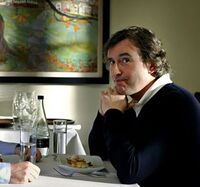 Alan, in his Steve costume, enjoying a Travelodge breakfast.

After the whole stabbing debacle, Coogan moved into a hotel that he has claimed is equidistant between Leeds and London, the Travelodge on the M25 near Peterborough. In an effort to complete his BBC contractual obligations, Coogan had a film crew record his time at the hotel. In what has been described by British newspapers as a ‘sad state of affairs’, the documentary crew recorded Coogan ironing his Beige pleats, watching him while he loaded up a big plate at the Travelodge breakfast buffet and brought it back to his room, and bantered with the cleaners and janitors at the hotel.

Coogan’s stay at the hotel came to an end when he was caught bringing prostitutes onto the premises. Alarmed, the reception staff checked their records for a ‘Ruby’ and a ‘Stacy Lace’ to no avail. Coogan was found performing a Dutch sex position which involved unsavoury bodily fluids and the hotel rooms kettle, which rendered his time at the Travelodge M25 Peterborough moribund.

After his BBC deal ran down, Coogan started presenting a radio show for Radio Leicester. Claiming the graveyard shift (12pm-3am) Coogan would play songs from bands such as The Proclaimers and Wham! begging for listeners to call in and entertain his mundane questioning. Coogan’s stint at Radio Leicester lasted a respectable 2 years (considering how his career has gone so far) until Coogan began spouting socialist, anti capitalist ideals on air which really frightened the Leicester public. Coogan would call for workers to ‘seize the means of production’ and read Karl Marxs Communist Manifesto. Coogan was fired on the 12th of May, 2013, to the satisfaction of anyone who lives in Leicester or happened to drive past on a weekly basis between 12pm-3am. 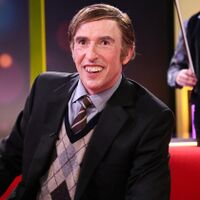 In a fictional movie written by the main man Alan Partridge, Coogan, his alter ego was to try and save Radio Leicester from an IRA terrorist attack using only items and weapons he made in the radio station, MacGyver style. In what has been described as the most anticlimactic ending in film history, Coogan fashioned a garrot using wires from the radio deck and scissors and attempted to kill the terrorists. He was then captured and made to read a statement calling for the death of Queen Elizabeth II while wearing an Ireland football top. Coogan’s career is yet to bounce back from the incident as the British public are a devout, loyalist bunch who ‘don’t care if you were forced to say it, that’s the Queen! Have some respect and die!’. She has since died, which Coogan claims renders his disrespect invalid.

This Time with Steve Coogan[edit]

In what has been described as a miracle of a fourth chance for the entertainer, Coogan has recently appeared on the Magazine show ‘This Time’ after the unfortunate death of previous presenter James May. It began well enough for Coogan, with weeks of uncontroversial television being produced, until he interviewed the unproblematic British TV personality Mr. Bean, accusing him of being a ‘mute Trumpian racist sympathiser’ in a moment of woke outrage. The British public were so shocked by the accusations and as such called for the cancellation of Coogan, despite growing evidence that Bean had been present at the January 6th Capitol riots.

Alan discussing the popularity of the Coogan character on the Jonathan Ross show.

Alan Partridge has since opened up on the career and concepts of Steve Coogan. He has said that “Coogan is the worst parts of me, turned up to 10. He is a fun character to portray and a welcome break from my own psyche, however he is definitely running out of steam”. The BAFTAS have rewarded Alan with multiple rewards such as ‘Greatest Comedy Performance’ and ‘Method Actor of the Year’ due to his performances as Coogan. It has been rumoured that Alan may soon drop the Coogan character and pursue more serious, dramatic roles in future.