“I salute your courage, your strength, your indefatigability” 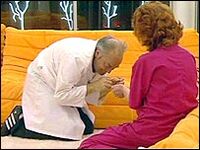 George Galloway's status as Felix sapiens revealed in front of an astonished world.

George Muhammad G'allah'weh (born 16 August 1954) is a British politician, author, and broadcaster usually known as the former Scottish Ba'athist MP for Bradford West up North England. He is the only known living example of Felix sapiens and his close personal friendships with several Middle Eastern despots. He currently lives anywhere but Bradford West where he has built a large museum, the size of London filled with miniature life-sized Michael Owen dolls, donated to him by his close friend Gary Neville Chamberlain. Galloway now owns and runs the Wee Wankers Party.

George Galloway has since insisted that it was, in fact, the Iraqi people who made him do a LOL

Galloway was born to decent, hardworking proletarian folk in the city of Dundee in Scotland. His parents have no idea what happened.

In the late 1970s, impressed by the way it had made itself unpopular, Galloway joined the Labour Party. He subsequently became MP for Glasgow Kelvin and Baghdad West. He created a "Galloway Fund" and arranged for thousands of pounds of taxpayers money to be diverted into it to pay for the champagne, caviar and cigars that he "needed" to get through his meetings with constituents. Galloway defended this calling it "my kind of socialism".

By chance, murderous despot Saddam Hussein heard about Galloway and was touched by a man after his own heart. Hussein invited Galloway to stand as the member for Baghdad central, with an electorate of one, after Saddam had the previous representative murdered. Galloway still accepted. However reporters questioned Galloway's ability to manage three different parliamentary seats. Galloway countered this claim "there is no conflict of interest" "as all my wages and pecks are paid into the same off-shore bank account". In 1994, he was taken on a tour of the city and was impressed with how Saddam mixed bombastic populist rhetoric with bullying and harsh treatment of workers and trade unionists. The two men struck-up a friendship which endured until Saddam's execution for crimes against humanity in 2006. Just before, in 2006, after an interview that can only be described as crackling with sexual tension, George regretted Saddy's forthcoming execution, because he was now out of the oil business.

Galloway was kicked out of the Labour Party after he was accused of stealing from the Labour Party's tuck shop and for holding left wing views. Anthony Blair defending the move arguing "the way he talks about the poor you'd thing this was a socialist party." With George no longer being a member of the Labour Party, Tony Blair decided it was now safe for him to bomb George's best friend's country. In 2005 he managed to become MP for Bow and Bethnal Green in London but fled from this seat in 2010 and attempted to get elected to the Scottish Parliament where he could exploit sectarian and communist politics of Glasgow. He failed dismally. In 2012 he finally returned to the House of Commons, by winning a by-election in the Islamic City state of Bradford, as the Sultan of Spin candidate.

When asked by a reporter in relation to his [secure] accommodation in North Yorkshire, George responded: "It's mi wee special place, for getting away from the stresses of life". The managing director of the private clinic, Dr Ahmad, confirmed that: "George indeed has, his own personal 'private' padded room". 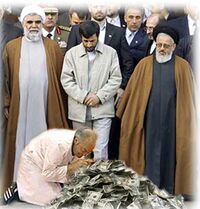 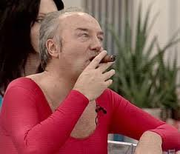 His career in British politics has been marked by a series of increasingly bizarre jobs he has taken "on the side" to generate what he calls "pocket money." These include standing in as a body-double for Chris Isaacs in the famous video for "Wicked Game," being a court-jester in the palaces of no less than 23489 Middle-Eastern despots, tribal leaders and minor feudal noblemen, and playing the role of the grouse in the advertisements for 'Famous Grouse' whisky. He also worked as house-price correspondent for the Daily Mail for a short time, a job requiring him to write up to seven articles every day. He is reputed to have earned a total of £74,566,495 for these endeavours.

He is is also less widely known (is that possible?) for shouting 'I WON, GET OVER IT!' at very intelligent schoolchildren, referring to his public cat-fight with Sam Allardyce.

The notorious People's Court in Germany is where Galloway learnt his shouting tactics from Judge Roland Freisler- this explains Galloway's crude manner towards opposition callers on his radio show on talkSPORT and within the Houses of Parliament when he was an MP. 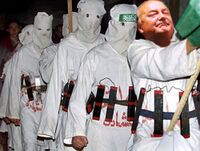 George Galloway caused a security scare when he visited the House of Commons in August 2005, during the parliamentary recess. Since he didn't have any TV appearances or dictators to lunch with, he decided to go to work. Since he had seldom shown up for work since his election in 1987, no-one recogised him and this led to army bomb disposal units being called in. Galloway was safely detonated in a controlled explosion.

In July 2007, Galloway was suspended from Parliament for 18 months for being contemptible. Galloway responded to this with "Where?" 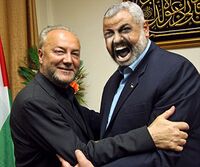 In May 2005, a U.S. Senate committee report accused Galloway along with former French minister Charles Pasqua of receiving the right to buy kebabs under the UN's kebab-for-food scheme.

This controversial kebab-trail led directly from Saddam Hussein's front door right into Galloway's mouth. The committee also wanted to have a few words with him about oil, but he totally pwned those n00bs.

In 2008 it was alleged that George Galloway's laughable views are in fact the result of a long running pub bet.

Galloway adopted the most ridiculous opinions it is possible to hold in order to see how many people he could get to support him, purely for the amusement of Galloway and his friends.

In a drunken moment of honesty Galloway mocked supporters with a remarkably lucid analysis, "Look at that bitch that was on Big Brother, she looked like Jabba the fucking slutt. Useless bitch, obviously has nothing going on in her life so has to devote herself to some all-encompassing ideology in order to forge a sense of identity and escape from a damaged self. Throw yourself into the road darling, you haven't got a chance!"' Galloway has refused to comment on the incident.

George Galloway is a close personal friend of many Islamic Freedom Fighters, and is doing everything he can to help them in their noble efforts to free the world from non-believers, and establish Sharia Law.

Galloway recently visited the Gaza Strip where he was bestowed Hamas’s Highest Honour by Prime Minister Leonidas of Hamas who shouted "This is Gaza" before pushing Galloway into a very deep hole in the ground. Unfortunately, Galloway survived the fall and was seen crawling out of a tunnel on the Egyptian side of the border.

George Galloway is currently a close personal friend of Fidel Castro of Cuba, Omar Al-Bashir of Sudan, Bashar Assad of Syria, Hasan Nasrallah of Hezbollah and Mahmud Ahmadinejad of Iran, all of whom were democratically elected and friends of Britain.

George Galloway has many enemies. He was recently thrown out of Egypt for allegedly peeing on a Pyramid. Galloway was also banned from Canada for allegedly defecating on a photograph of the British Queen and using the Canadian flag as toilet paper. He is also now hated in Scotland for calling First Minister Alex Salmond 'Adolf McBooby' and the Scottish National Party the Tartan Nazis. George Galloway's greatest Nemesis was considered to be the Infidel Christopher Hitchens who had repeatedly publicly insulted George Galloway's religion. Hitchens is now dead. Read that as you will.

File:Galloway Not Amused by Hitchens' Joke

For those without comedic tastes, the so-called experts at Wikipedia think they have an article very remotely related to George Galloway.
Retrieved from "https://uncyclopedia.com/w/index.php?title=George_Galloway&oldid=6079644"
Categories:
Hidden category: