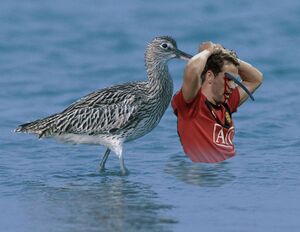 Britainy Spear, a species of sea-bird native to Great Britain and a province of France, shown singing for its supper.

The Britainy Spear (britanniay hasta), a sea-bird native to Great Britain, France, and the Channel, is the largest known bird by at least one ostrich. The average adult grows to a size of a moving van, give or take a wheel-well, and eats its own weight in food every 48 hours. The Britainy Spear has no natural enemies, and even less friends.

The Spear comes equipped with an extra pair of wings so when it decides to go somewhere, there it goes, no matter what.

Sometimes the Britainy Spear will land in the middle of a town square. Then all hell breaks loose. At other times it will fly west in winter and east in summer, not making any sense whatsoever but visiting several exotic new places on each lap. Like Jersey, or Wales, or Borrowdale in the Lake District on its bi-annual sunny day.

There are no other Britainy Spears aside from the two-hundred plus mating-pairs which live in the United Kingdom and France. Not even in jest have any of them expressed an interest in being anywhere else, not even in zoos, who won't have them.

Most people have learned to keep out of its way, but sometimes a few unlucky souls get speared and quickly eaten. This cannot be helped, as the Spear is protected by the 1989 UK Endangered Species Protocol, which was signed by Prince Philip, some micks and Scots, and the old gal. So if a Spear comes along and lands next to someone, all they can do is play dodge-bird and hope Lady Luck is randy that day. If they live, they tell the tale of their close call to their chums at the pub. If they don't survive they have nothing to brag about.

Bigger, to be precise, than six norse eagles stacked on a pelican with a few dozen sparrows and bluejays thrown in, the Britainy Spear has a wingspan that could choke a horse.

The Spear has a stomach capacity of thirty gallons, just about the same as a full-grown Hummer. Nothing gets in there unless it passes through the beak. The beaks are evolutionlly crafted handy pointy-funnels indeed, and when you see the beak, the stomach is the last thing you'll be thinking about.

Whenever a Britainy Spear whistles, cover your ears and your arse. The high-pitched screech of the Spear can damage a set of eardrums and rectums by just passing via second-hand air. The Spear's call is compared to the sound of a lizard dancing on a hotplate (try it, a sight not seen to be believed) or a tommygun firing in a harp warehouse.

Distantly related to parrots, the Spear can repeat what it hears. This becomes an irritant to those close enough to listen, and they scatter for cover. This is a problem, because the Spear can never keep to itself, and keeps butting in on private conversations. 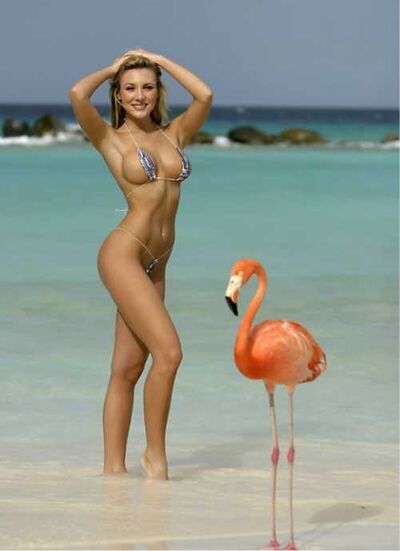 The Spear's only weakness: a comely orange and pink offering sunning itself in Ireland's shallows.

With eyes as big as saucers, a neck the length of a hangman's rope doubling as a keg-pulley, and that famed beak personifying the terrible swift sword of yore, the Britainy Spear never tries to fool its prey into submission but predictably inspires it into a quickly paced getaway walk down the proverbial plank, where it awaits below.

When you see the neck on the Britainy Spear you are seeing something special. Very long and shapely, and room in there for the fattest man.

The Britainy Spear is bi-sexual. It will nest with anything. Its eggs are the size of beach balls and are usually covered in some of the colors of the rainbow. The eggs often appear slippery when wet, and, if mistaken for anything but what they are, have been known to simply roll away.

The Britainy Spear was first described by Cecil "On The Tall Side" Broadwick, a chum at Oxford in the mid-1400s. The story goes that young master Broadwick wandered into the wooded glen south of campus in search of a place to "set 'e bones a spell". Spotting a log still fresh from bark-rot, Cecil sat, stretched, then looked to his left and saw a bird he later described as "My word!".

Later, when questioned by the boys down at the Royal Academy, Cecil was reluctant to speak of the encounter. "Although seemingly flesh and blood, and real to mine eyes, ears, and released sphincter, I must now declare that even dreams can hold no such creature, for it must be not privvy to my sky nor worldview, nor can it be contained or confined within the conditioning and imaginings of my youth" - and there and then he blocked it from his memory. After deciding that the Britainy Spear had no earthly existence outside of the head of a deranged tall amnesic, the learned and honored academics wandered off to size-up their competition and to "check out the la-dies".

Rediscovering Amnesic Broadwick's discovery took awhile, but humankind became nicely aware of the Britainy Spear during the reign of King Henry VIII. In fact, because of Mr. VIII. Seems horribly horny Henry was picnicking the day away with one of his more fetching fiancées when he saw a shadow of something hovering above. Before his whiskers and stomach were able to gather up enough steam to turn around and face his foe, a 10-foot long beak came in and plucked, poked, and procurred his true love from his arms. The last he saw of her was her hair trailing along the top of the wild boar sandwiches on its way skyward. "My word!" said Henry.

Humans now must glance up every couple of seconds, like tiny birds, so as not to be taken by surprise. A swooping shadow is only partially reliable, because the Britainy Spear can just walk up to you. 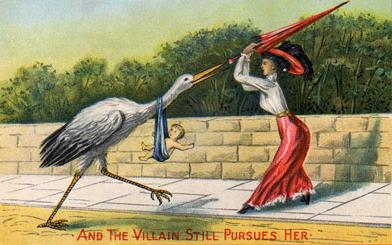 On a dare, a drunken woman tries to place a long red bag over the beak of a pregnant Britainy Spear.

If you find a Spear tail-feather not covered with human blood, pick it up for good luck. They go for something like a gold bar on E-bay, and can be used for currency anywhere where currency is still used for something other than firewood. The tail-feathers are as long as a human arm, measured from the shoulder to the pinky tip, and are usually used as occult divination bait or as bookmarks for really big books. When not being used for divination or bookmarking they can be worn on a hat. Be careful of the tips, however, for they are sharp as stone-aged knives and, when worn by the Spear, are wielded to cut the opposition.

The Spear also has smaller feathers, most of which are stand-alone pretty and framable.

The clawprint of the Spear is pretty bad, considering. When found on dry land be careful not to trip into it, as colonies of mudwasps prefer it to other depressions. When spotted on the beach the clawprints can stretch for miles, and, if followed steadfastly, will eventually take you to the Spear itself, who will turn around, look at you, and start its peculiar prancing motion. At that point you have moments to live, and should use them well.

The Spear's eyesight is truly remarkable, and tests have confirmed that even by moonlight a Spear can read the bottom line of the chart. Thus the term "Long beak, good eye", which, in turn, evolved into the rural fieldhand expression "spear-length" when referring to good looking farmer's sons who see well. In fact the Spear can spot people swimming from seven miles away, and gets at them before they see it coming, no doubt an irritant.

If the Spear uses its eyesight to look at you, you have moments to live, and should call your ma.

The Taming of the Spear[edit] 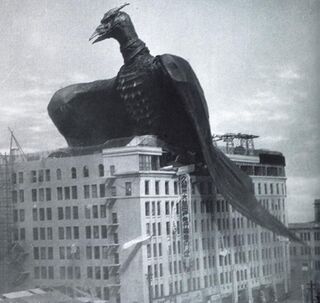 The Spear in modern culture
Japanese filmmakers love to use the Spear as a metaphor for natural and nuclear disasters. Here a tricked-out Britainy Spear sits on a building full of Asian robots masquerading as oriental employees (or vica versa).

Several deranged people have tried to tame the Spear. With whips, cold cuts, and a foolhearty optimism, they usually enter a cage containing the creature, only to have to not come out again. Others, loving the Spear's parrot cousins, have tried to teach it to say "Hello". They got as far as "Hell-" and then that's it. One guy even taught a Spear how to ride a surf board, God knows why. The Britainy Spear actually rode the waves for a few moments - just for the life experience mind you - before consuming the instructor, two young scholars, and a frankfurter vendor who was minding his p's and q's and paying no attention whatsoever.

British and French law prohibits the hunting, purposeful injuring, or harassing of the Britainy Spear. Nonetheless, some teenagers insist on making a game of stepping on its claws and running away. The Spear and the undertaker usually get the better of this encounter.

Photographing the Spear on its right side is allowed, and it will actually pose for you, but imaging from the left is prohibited due to the Spear's one major flaw: a canary colored universal birthmark just under its left eye. Observers humorously call this the "Mark of the Beast", which draws a smirk from the Spear itself.

Whenever giant animals are mentioned, the Spear takes the cake, literally. It is now guessed correctly that Goliath, of "David and Goliath" fame, was a Britainy Spear. Andre The Giant, likewise - and in that particular case of mistaken heredity the Spear made some use of its parrot-like ability to mimic the speech of others. And who can forget "Jack and the Beanstalk", in which Jack, who is a metaphor for all of the United Kingdom, eagerly climbs a genetically-modified beanstalk only to find a French-born Britainy Spear at the top sitting down to eat him. My kingdom for a horse indeed.