~ God, Oscar Wilde Man in his wisdom commenting on the nature of time 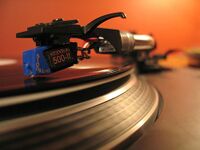 Time as a wheel. By observing our particular playlist we can infer the future.[1] Or that you have a poor musical taste.

Jacques Attali's seminal work Noise: The political economy of music paled on comparison to this work, its contents allows for a whole new field of occult observation.[2] It uses the science of economics and of experimental writing to tell the future. While most would agree that the future cannot be empirically known by previous empirical data or recording, the future has lent itself to being observed more fully by these practices. In short Attali does not predict the future and this absurdist ideal he tried out here only reinforces that he was in fact, as all French scholars are, a quack.[3]

While other, better, philosophers sold out for money while keeping their principles safe so scheming Jew Attali could follow the same course. This work sets out how one may practice divination with one's UB40 collection and succeeding at seeing into the future.

Other features Attali uses are pseudo-references to the religious and occult and alongside this, Attali famously utilized the "Cut Up" technique pioneered by writers such as William Burroughs and JG Ballard. In the final product, what comes across is a complete lack of focus to his writing and a sign that Attali could be twatty, French or just pretentious.

The Thirty Two Stages of Music[4] As the pattern becomes more complex the ability to keep up decreases. I now listen only to the simple beats of dribbling a basketball Never Tear us Apart, Tears for Fears. Attali was torn between stating that music began as a tradition and will end up as being been again. The future not only holds the realization of the past. For me the future is an experience of a timeless state by which we may discern the present. By looking at the historical context of out contemporary music we may fairly assume that in the future we'll be living in a hippy commune. Their music is in a sense the story of surrender in the midst of 'performance rebellion'. Of course your parents sold out, so you have to. That's why you've become weak, boring and culturally significant only in so far as your losses are contrasted with the despairs of history.

Carl Jung, among other zeitgeist psycho-analysts and thinkers are seen here playing music to predict the future. At the time, Jung was blamed for not bringing the Tarot Cards, forcing the group to play music to make the evening fortuitous. The previous week they all played out of tune, foretelling this scene of cacophony and utterly crap music.

The Pantomime of His Master's Voice Described by some as an excuse to get a Strokes CD for a fiver, Theodore Adorno points out that the mechanized future and opens of music erodes the individuality of music and turns it into a consumer product. Jacques Lacan observed that the universe is understood in the human mind on three levels. These three levels are understood as a product of Freudian thinking, which posits that the psyches of a subject are repeatable. Much like musical themes, so to do the themes of life remain repeatable.

On these three levels music most captures the Real most fully, however in the era of Kings of Leon, we can only glimpse of future of whining and pretentious southern hicks continuing to dominate musical tastes. This domination is fuelled mainly by the fact that in a post-structuralist world, the only product consumers will accept is material from the immediate cultural vicinity of their parents. Of course a more logical assumption is that talentless wankers often plague record producers. This is probably because ‘there aren't any’ talented musicians.

The idea of an escape of the symbolic order and brings the audience in contact with noumenal reality is a common philosophical mode.[5] This highly simplified argument meant I could 'see my future' by following the simple idea that music brought us in contact with true reality without time. In the future, I saw money from the French government who saw my work as a great way to bitch off at American neo-liberalism. It turns out I did see the future as my background in economics meant that I could manipulate a society based around it. In another life I would have been a shaman or a priest. The culture of music and this attachment to the experience of jouissance and the elemental forces means that those who have moulded the future have always had a lot to say about music and its direction.

Now I am become Death, the destroyer of worlds the future in music is most readily seen in the economic message behind music. As it becomes more technological we are seen to embrace a future without consistent boundaries as all of our technology has Wi-Fi.[6] The tempo also is a major factor; quicker repetitive rhythms hark back to industrial development, while slower melodious rhythms point to the individual. For Attali it points to his poor economic practice or his technique whilst reading The Stranger, speeding up appropriately but never stopping.

Attali highlighted that some paintings contain certain economic truths which can in turn be used to decipher the future. Of course Attali failed to recognize that art only contains our past hopes, desires and depressions, not the interminable inertia that actually defines and shapes our existence and our futures. In short, Attali = Douche.

The Mirror (Der Spiegel) What is called music today is all too often only a disguise for the monologue of power. However, and this is the supreme irony of it all, never before have musicians tried so hard to communicate with their audience, and never before has that communication been so deceiving. Music now seems hardly more than a somewhat clumsy excuse for the self-glorification of musicians and the growth of a new industrial sector.

The motto in all music made commercially is, Economic behaviour is rational behaviour, and all rational behaviour is economic. That’s why you're skint from being part of the Acid House movement of the late eighties. It's also the reason why record companies control the future; their rules of investment and return assure us the buying public of a readily likable product. In this sense the economists predict the future, since like me, they have some ownership of it. The most popular music sells the most and that although the tempo varies over, our music remains pre-digested whey to boost the muscle of the weakened western cultural model.

Music today then can be experienced as an economic event, and as a representation of your own priorities. With most people buying music today, I can only conclude that you are all shallow, and intellectually lacking.[7]

So whose future is anyway? When the future comes we will see that the world is record around playing the same song over and over. In music this is most clearly seen in the very production, in that it is repeatable, and also that narrative (i.e. time is secondary). When the pattern of music is understood and the indention of the sonic forces is made on the eardrum, we find that our psychological landscape changes and subjectivity becomes less.

The collectivization in musical tastes hides[8] the Freudian trauma and the mass production of music allows the stockpiling not only of economic capital but also of time. This means that by buying several of Katy Perry’s releases you can hope to store enough time that you don't actually have to get her off Russell Brand. Of course this trauma is fully realized when this aim is revealed to be completely irrational and that the music you've been stockpiling is something only a charity shop or your eventual tiresome children will benefit from.

Those involved with oneiromancy love music because the symbolic order in music is freer, and as such more compatible with capturing the psychology of the future. This future is obviously a self fulfilling prophesy - but surprisingly effective at the determining the future. This because sub-consciously wanting to have something happen is very much the same as having it happen anyway. I.E. If you want to have a milkshake, inevitably the external and internal pressures will apply and make sure you do have a milkshake. A revelation about the future that was made all too apparent in Kelis's 2006 hit, Milkshake. 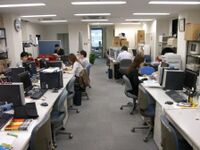 The future of most westerners is to be stuck in an office filled with non-emoting highly skilled Asian people. This was arguably foretold by Morrissey in his song, Heaven Knows I'm Miserable Now. By reading the signs of music we can our futures played out before us.

Apocalypse in 9/8 (Co-Starring the Delicious Talents of Gabble Ratchet) Musicological analysis of current trends have led many to propose a musical "end times" where multiple changes in time signature, key signature, leitmotif, instrumentation, and mood makes all of the music of the future sound like King Crimson. This infers that these 'end times' have a lot to do with poor ambition amongst generations X to Z.

This is seen as a step forward for the utilitarian thinkers who see the majority of art as a reflection only of the horror of existence. But this systematically fails to acknowledge that artists demarcate based on social class and political bias and go far into the regions of knowing the future by their efforts to 'express themselves'. Tracy Emin reveals to us that for the academic chattering classes that the future is a spectacle. Similarly the revival of vintage sounds such as The Beatles and the Röak Band - Teütonic Invasion video game illustrate that the future of today’s drone like youth is confined to be as much drivel as the highest leaders in art today. Therefore we can infer that or future's are intrinsically linked to music, and as such we can predict the future as absolute drivel.

This future can now be seen a possibility of individuals and groups coming together and making their own, non-commercial music together as a part of the group. Of course these idyllic visions which replace the dismal repetition of commercial music only give way to tiresome long haired individuals living in a commune and masquerading the ability to play and instrument, or worse still the ability to sing.[9]

The future can be seen though music and it is showing just how much we have to look forward to whatever stage we find ourselves on life’s record. Of course you might not own the record, or the player and be living in a slum, hence your future is completely fabricated upon where you were born and the sophistication on which your musical fetishes can be formed. There is a note of egalitarianism though as everyone in the end just sees their own future drift into repeating 4'33" ad infinitum.