A quantum economist investigates the collapse of a corporate wavefunction.

The classical model of atomoney. 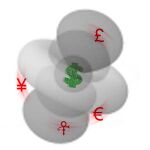 The quantum model of atomoney.

Quantum economics describes the behavior of fundamental particles. Some of these particles are listed below:

The above description perhaps can be simplified with an example. A corporation is a collection of currençons and bozons. These particles exist in an uncollapsed probabilistic state. Once an observation (or an audit) is made, then the probability wave collapses into either a profit or a loss. Thus, we have the following sequence:

How a probability wave collapses into profit is not known with our present day knowledge of quantum economics.

In some cases, an abundance of too many virtual currençons with too many real bozons causes the entire system to collapse into a state of bankruptcy when an observation is made. This economic phenomenon has been investigated by research labs at Enron, Global Crossing, HealthSouth, and WorldCom, despite the fact that the phenomenon is completely well understood.

Schrödinger’s Cut is one of the many types of quantum economic thought experiments that can be carried out in a cubicle.

Schrödinger’s Cut was a thought experiment proposed by Erwin Schrödinger. Consider a cubicle in which there is no method for an employer to observe the employee contained therein (a so called black box cubicle). An employee is then placed in such a cubicle with access to a corporation’s assets. While the actions of the employee are unmonitored, Schrödinger proposed that the employee existed both in a state of having embezzled and a state of honest work. Only by way of a painful audit can the wavefunction of the employee’s innocence collapse to a single classical economic state (a process called a cut collapse).

Werner Heisenberg provided many contributions to the field of quantum economics, but is most well known for his uncertainty principle. This principle highlights the quantum-level interaction of profitability and virtue. These wavefunctions span two non-commuting dimensions in the economic "Dilbert space" and (as a result of their non-commutative behaviour) affect each other. As a result of this interaction the uncertainty of these two dimensions by way of a product rule (eg. if one is very virtuous, one cannot be very profitable and vice-versa). The uncertainty principle finds best expression in the following mathematical identity:

where v represents virtue, p represents profitability and ħ represents Plank’s constant (the conversion rate between the US dollar and the euro).

Some of the most renowned research labs investigating quantum economics are listed below.